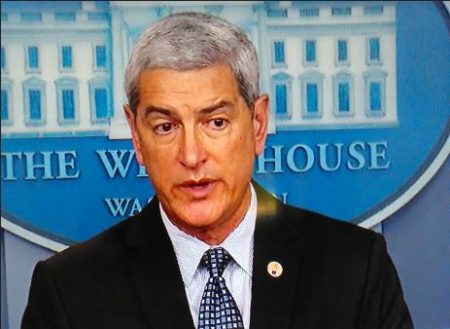 (Aug. 14, 2018) — Just after the opening of Tuesday’s White House press briefing, the director of the POW/MIA Accounting Agency, Kelly McKeague, spoke about the process of identifying the individuals whose alleged remains were returned from North Korea on August 1.

McKeague told reporters that the process could take “months” or “years.”

CBS News’s Major Garrett asked the first question about the quality of the remains of the 55 alleged U.S. soldiers lost in the Korean Conflict recently returned, which was answered by a McKeague colleague who said the condition of the remains is generally “poor” but that the identification will be “very DNA-intensive.”

A Fox News Radio reporter then asked if it were likely that the remains are those of not only Americans, but perhaps others involved in the conflict, to which McKeague responded in the affirmative.

He said that the mission to recover and identify remains of missing soldiers “is considered a humanitarian mission,” including by “the Russians and the Chinese.”

The unidentified colleague said that McKeague’s team spent two days in South Korea examining the remains before they were returned to the U.S. in order to ascertain preliminarily that they belonged to U.S. servicemen.

That segment of the briefing ended at 3:01 p.m. EDT, after which White House press secretary Sarah Sanders returned to the podium.

The first question at that point came from ABC News’s Jonathan Karl regarding President Trump’s tweet about former White House employee Omarosa Manigault Newman, who on Monday Trump called a “lowlife,” much to Karl’s apparent disapproval.

A second reporter claimed that Trump often insults “African-Americans” and others from certain groups, to which Sanders responded that Trump is an “equal-opportunity” defender against personal attacks.

Questions then turned to the U.S.-Turkey relations, which have been strained in recent months with the continued imprisonment of Pastor Andrew Brunson of North Carolina.  Sanders said that National Security Adviser John Bolton met with a Turkish-government official at the White House on Monday.

After a few questions on that topic, reporters returned to Omarosa and her claims that Trump has used a racial slur in referring to African-Americans, allegedly supported by a recording she released on Tuesday.

The presser ended at 3:24 p.m. with a caption provided by Fox News that the Trump campaign has filed an “arbitration action” claiming that Omarosa violated a non-disclosure agreement she signed when she joined the organization in 2016.

Omarosa reportedly responded that she “does not believe” she violated the agreement.

Recent reports have said that Trump’s approval rating by African-Americans has risen from 15% to 29% over the last year.  Trump has denied ever uttering the racial slur, saying that it is not in his vocabulary.

Correction, August 15, 9:24 a.m. EDT:  This article erroneously reported Tuesday that Omarosa signed an NDA before accepting a position at the White House when the NDA was signed when she joined the Trump campaign.