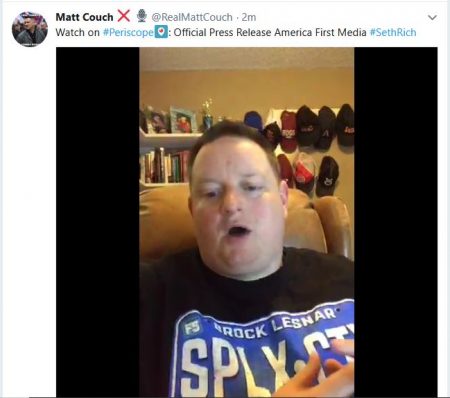 (Jul. 28, 2018) — At approximately 7:15 PM on Saturday evening, Matt Couch of America First Media Group (AF-MG) issued what we believe to be a dated Periscope “press release” on his organization’s investigation into the death of former DNC Data Director Seth Rich.

In the release from last year, Couch said he would be requesting of Washington, DC Mayor Muriel Bowser the policy of police-worn body cameras in effect on the day that Rich was fatally shot near his home.

Couch then posted several more videos in his Twitter feed on the investigation, one of which he reported was made at “the bike rack” dedicated to Rich and located outside DNC headquarters.

It was not immediately clear if the videos contain information not released previously.

Another tweet links to a July 11, 2018 article by “Hannibal Moot” summarizing a press conference held the day before by attorney and lobbyist Jack Burkman which AF-MG found troubling, although having coordinated with Burkman to hold the presser.

As Couch has mentioned in the past, no DNC member other than former chairman Donna Brazile has expressed outrage, sorrow, bewilderment, or any question at all relative to Rich’s brutal killing in the early hours of July 10, 2016, reportedly by two gunshots.