Articles of Impeachment Filed Against Rosenstein

CONGRESSMAN:  “WE HAVE HAD ENOUGH” 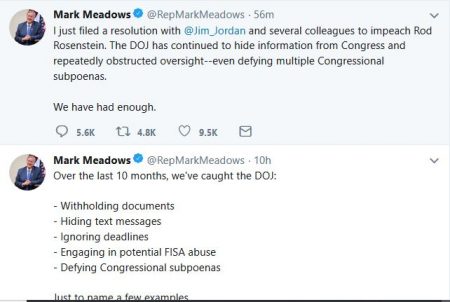 (Jul. 25, 2018) — At approximately 7:00 p.m. EDT on Wednesday, Rep. Mark Meadows tweeted that he submitted an impeachment resolution against Deputy Attorney General Rod Rosenstein, who Meadows and other members of Congress have claimed has obstructed their numerous requests and subpoenas for government documents over approximately a year.

“The DOJ has continued to hide information from Congress and repeatedly obstructed oversight–even defying multiple Congressional subpoenas. We have had enough,” Meadows tweeted.

Earlier in the day, Meadows listed his and others’ allegations against Rosenstein to include “Hiding text messages” and “Defying Congressional subpoenas.”

Meadows and other members of the House Judiciary and Oversight & Government Reform Committees have been threatening for months to move forward with Articles of Impeachment against Rosenstein, who has been overseeing the “Russia” investigation since Attorney General Jeff Sessions recused himself shortly after his confirmation by the Senate last year.

The committees are seeking documents associated with former Secretary of State Hillary Clinton’s use of a private, unauthorized server, the opening of an investigation into the Trump campaign and the Justice Department and FBI’s conduct during both probes.

Constitutionally, impeachment proceedings against “officers of the United States” are voted on in the U.S. House of Representatives and, if passed by a majority, are referred to the U.S. Senate, which serves as the jury.

According to CBS News, Meadows, Rep. Jim Jordan and nine other congressmen are supporting the measure.  A statement released by Jordan’s office reads, in part:

The impeachment articles come as evidence continues to mount regarding the Department of Justice’s problematic decision-making during the 2016 campaign and conduct surrounding the transition to President Trump’s administration in 2017. The impeachment articles are the result of nearly 9 months of unsuccessful congressional attempts to force the Department of Justice (DOJ) to comply with oversight requests.

The failures cited within the articles include intentionally withholding embarrassing documents and information, knowingly hiding material investigative information from Congress, various abuses of the FISA process, and failure to comply with congressional subpoenas, among others.

The press release includes brief statements from each of the nine co-sponsors of the resolution.

Whether or not Speaker of the House Paul Ryan will bring the measure to the floor for a vote is unclear.

Articles of Impeachment Filed Against Rosenstein added on Wednesday, July 25, 2018

2 Responses to "Articles of Impeachment Filed Against Rosenstein"