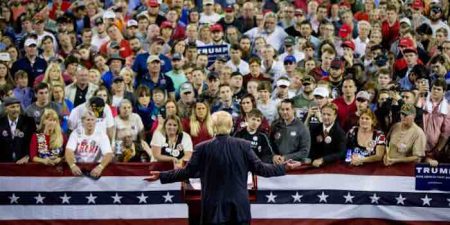 (Jul. 12, 2018) — “But when a long train of abuses and usurpations, pursuing invariably the same object evinces a design to reduce them under absolute despotism, it is their right, it is their duty, to throw off such government, and to provide new guards for their future security.”

Darn, those words sound so positive and reassuring, along with our collective agreement that their ‘absolute despotism’ must now be stopped! We must remain positive. This is now our time. Please know in your heart that we already have President Donald Trump as our leader to ‘throw off such government...’ as he is in the process of providing new guards for us, with a second conservative Supreme Court Justice, Brett Kavanaugh, for our future security.

We. Are. At. War! And, our sworn enemy is the progressive democratic left in many states and certainly in our Federal government. You can refer to them as communists if you’d like, for it matters not. The JFK democrats of “…what you can do for your country” are long ago dead and buried. Today’s democrats are totalitarians, whose only goal is to destroy the very fabric of our Constitutional Republic. They are doggedly determined to take total control over you: control over where you go (where you eat, or go out for entertainment), what you think, what you say and do. Oh, and they also want to take away our guns too, so we can no longer defend ourselves when our property rights are taken away from us. They, rightfully, fear our guns. Never give up your guns. Never.

We must stop and analyze the volatile situation that has been forced upon us by this criminal cabal, led only for appearance sake, by Special Counsel Robert Mueller. The complicit media seeks only to prevent the people from knowing the truth, and to understand that the sole purpose for the Mueller investigation is to obstruct and mislead the people. The MSM is constantly manipulating the news cycle, with the ridiculous rantings of Mad-Maxine- Waters, over sensationalized reports of riots and demonstrations to create fear, and fake Mueller SC reports, all for the purpose of distracting the people and preventing many members of the deep state cabal from being prosecuted for the felonious crimes they have committed against the people and laws of this great country of ours.

Most know that Mueller is operating an un-Constitutional Special Counsel, which was illegally authorized, and allowed to continue by Rod Rosenstein. But, if left alone, the totalitarian democrats, along with a number of corrupted NeverTrump Republicans, will disregard the fact of law that states a Special Counsel has a timeframe, which now has passed as of January 1,

2018. They will not allow Mueller to be stopped by creating an ongoing smoke screen of faux indictments and/or until he has completed the goal of removing POTUS Donald Trump from office. But, we must not leave them alone. We must stay focused. Spread the truth. Trust the plan. The soon to be fired/removed Rod Rosenstein (RR) will be the spark that lights the fire. Justice will be served. Think military tribunals. Think Gitmo.

Our mainstream media is owned and operated by the globalist oligarchs who want nothing more than to criticize Trump and to have him removed from office. Our media has violated their Constitutional rights of being a free press as an independent legislative branch of government. We will therefore publish the truth here for you:

• President Trump has a 48% approval rating. Really?! That number would be in the high 70s if we had an honest, American-loving news media. We don’t – their numbers are skewed.

• Know that that hag HRC will never run for president in 2020. Even the totalitarian fools want her to go away. You can mark my words: by mid-year of 2020, Hillary will either be: a.) incarcerated, b.) in a mental institution for the criminally insane, c.) having escaped the country, or d.) having passed on.

• Barry’s fraudulent long-form birth certificate (LFBC) has begun to bubble up again. Let’s just suppose for a minute that Obama was a totally legit president, which we understand is extremely difficult, but try. Then why would he knowingly commit a felony by posting a fictitious LFBC on the White House website in 2011? And, who was the impetus behind it, who forced Barry Soetoro to post the LFBC? If you said Donald J. Trump you have very good memory, because that is exactly who it was. As lead investigator Mike Zullo has said, “No one wants to deal with the crisis this is going to cause, they want to sweep it out of the public purview.” We will not let them hide from it any longer. And, surprise, neither will President Trump. And, please know that it has never left his memory, either.

You are riding the strongest and fastest horse. They are riding on a weak and slow horse. Go for the ride. Trust Trump. Justice is coming.

One Response to "We Got This…!"