AS OF SUNDAY AFTERNOON, EDT 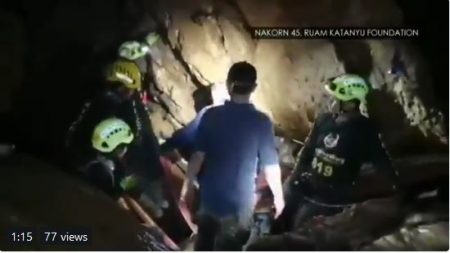 (Jul. 8, 2018) — 2:13 p.m. EDT – Four boys from the “Wild Boars” soccer team in northern Thailand were rescued earlier on Sunday from their 16-day ordeal trapped in a cave more than 2½ miles from land, multiple reports now say.

Earlier on Sunday, several outlets reported that six boys had been brought to safety, but that statement has been revised.

The boys were placed in waiting ambulances and are believed to have been taken to a hospital by helicopter afterward.

Five Thai Royal Navy SEALS and 13 divers from outside of Thailand are participating in the rescue effort as well as experts and military from around the world.  A total of 12 Wild Boar team members between the ages of 11 and 17 and their 25-year-old coach went missing on June 23 and were discovered deep in the Tham Luang Nang Non cave on July 3 by two British divers.

ABC of Australia reported that rescue efforts were suspended for the evening after the four were brought out, with plans to resume the operation after approximately ten hours.  There is an 11-hour time difference between Thailand and the East Coast of the U.S.

Updates on the mission are being provided on the Thai Navy SEALS’ Facebook page.