Rescue operations are being conducted in the town of Mae Sai, where it is now nightfall.

Two boys have reportedly been rescued successfully, with a third said to be en route out of the Tham Luang Cave more than 2½ miles from land.

Divers, engineers, Navy SEALS and other specialists from around the world have been lending their efforts to the rescue, which is reportedly moving faster than expected given that heavy rain is expected in the area soon, reducing the window of opportunity in which to conduct the operation.

For the first 9-10 days, the boys, who are aged 12-16, and their coach reportedly had little to no food and water, although photos taken after they were found show them appearing to be in good spirits.

The expert divers carrying out the rescue have had to swim through narrow spaces and water clouded by mud, making visibility very poor.  Other risk factors include panic, claustrophobia, the boys’ weakened condition and the distance that must be traveled to land.

Up-to-the-minute reports are being posted under the Twitter hashtag #ThaiCaveRescue on Sunday morning.

On Friday, a Thai Navy SEAL died after running out of oxygen during preparations for the rescue.  He is now lauded as a “hero.”

At 8:44 p.m. EDT, Fox reported that the “first boys” out of the cave were taken by helicopter to a nearby hospital for evaluation. 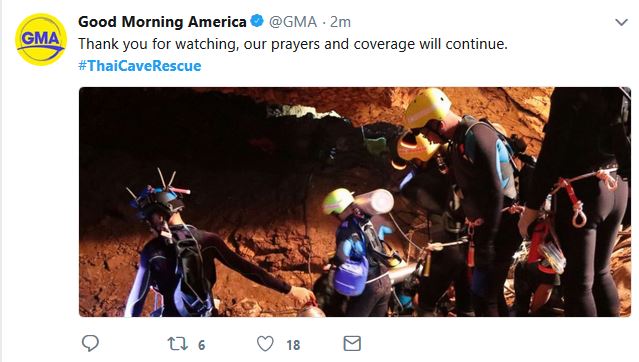 Fox News and “Agenda-Free TV” are broadcasting the operation live.

At 9:16 a.m. EDT, President Trump tweeted about the rescue: