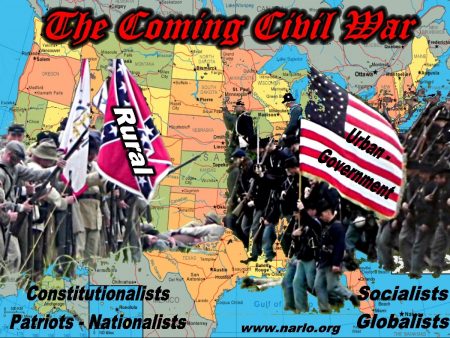 (Jul. 3, 2018) — “In the middle of the nineteenth century, the United States embarked on a new relationship with death, entering into a civil war that proved bloodier than any other conflict in American history, a war that would presage the slaughter of World War 1’s Western Front and the global carnage of the twentieth century.”  — Drew Gilpin Faust, Contemporary historian

The warning from Mr. Faust should tell us that embarking on a civil war, no matter how wide is the gap between us, should be avoided at all costs.  Those who are calling or yearning for a civil war and oiling up their guns have conveniently forgotten our bloody and savage history.  But what is the answer when our differences slowly but surely evolve into animus and rising violence, as they are now?

Republicans take opposition with anything that falls under the Progressive banner.

Mention the words “abortion” or “gay rights” or “gay marriage” and the battle lines form quickly.

Oppose open borders and illegal immigration and you are called a racist.  Follow immigration law by the Border Patrol and ICE, then detain and deport illegal aliens and the human rats come out from behind the garbage dump to protest a legal government policy, not because they care about illegal aliens, but because they want to tear down President Trump.

Implement a travel ban on immigrants from Muslim countries for national security reasons and Democrats become apoplectic and go straight to U.S. District Court to challenge it, even though the President has constitutional authority to impose such a travel ban, no matter who is president.

Democrats want to repeal the Electoral College, thereby turning America into mob-city rule.  If they are successful, the 15 most populated states will rule America from a socialist platform.

Attack unions’ cozy relationship with Democrats and government and some folks get shot in the back of the head assassin-style and then dumped in the river with cement boots.

Rural America is up in arms over the massive rise in environmental regulations that make farming and ranching a dangerous financial gamble and a painful chore, rather than a fulfilling and rewarding profession.  Farmers and ranchers blame city folk for electing environmental zealots to political office who pass very restrictive agricultural and environmental legislation.  Democrats blame ranchers and farmers for damage to the environment and want to drive all the rural folk into high-dense urban cities.  The want us to live in 25-story apartment houses and take buses, mass transit, or our bicycles to work.  Farmers and ranchers find that they are disenfranchised from the political process because of the big-city vote majority.  They no longer have a voice in politics and are forced to “eat” whatever the big city environmental fruitcakes hand them.

Property, sales and income taxes are going through the roof, but we should bow down to the federal government for giving some of our money back to us in a tax cut.  How benevolent of them.  Every government jurisdiction keeps wanting more and more and more taxes from the people to pay for the wish lists of powerful social, environmental, corporate, union and international lobbyists.

The national debt is at record highs and showing no signs of going down.  Many are angry about that and wonder why it can’t be fixed.  America is broke and should be in bankruptcy court.

Government, at all levels, is becoming increasingly corrupt.  The recent exposures of DOJ and FBI corruption over the 2016 presidential candidates and Russian meddling are witness to that fact.

The power of the federal, state and local bureaucracies have so exceeded constitutional authority the constitution might just as well be used as toilet paper.  The EPA has become a separate branch of government.  They make environmental law based on flawed science, or no science at all, while thumbing their collective noses at the Congress and the American people.  A sympathetic Congress does little to rein them in.

Drug, alcohol abuse and suicides are on the rise.  Mental health nut-cases are shooting up our schools or other soft targets.  The cost to society for this wanton violence and self-induced malaise is in the multi-billions of dollars every year, not to mention the needless loss of life.

Crime in our cities is becoming epidemic, in spite of what statistics show.  Turn on the local news and all you will hear are stories of shootings, stabbings, murder, rape, robbery, arson and car crashes, especially if you live near or in a big city.  Stepping back from afar and viewing all this carnage perpetrated on ourselves by each other can only be construed as a society eating its own flesh.

On top of all this internal strife, we have two super-powers trying to compete with us and drive us into the dust.  Russia, China and the United States are now going for military forces in space.  Where will that lead when the first missile is launched from space towards a city?  Armageddon!  Then there are Iran and North Korea threatening peace in the world with nuclear and weapons of mass destruction.

Is it any wonder that Americans are so divided and are on the brink of going to war with each other?

But long before some earthly catastrophe or a space rock sends us into extinction, we will destroy ourselves.

The only thing that stands between a planet in perpetual world war or human annihilation is American freedom.

Maybe the rise of American freedom in 1776 was Providence at work, maybe not.  But if we succumb to the siren call of socialism, which seems to be the direction we are heading, civil war is our future and the promise of Providence will have been denied.

We say “civil war” because there are millions of Americans who will not lie down and play dead for the rise of socialism. Those millions are heavily armed and if you push them too far, like the “shot heard round the world,” war will break out between those who cling to socialism and government dependence and those who cling to freedom, their Bible…..or their guns.

Given all this, on this 4th of July let us not forget who we are.  We are Americans, for God’s sake.  The blood of heroes and patriots courses through our veins.  Each of us is the descendant of those whose spine was stiffened by courage when his or her country called or evil raised its ugly head.  We are the direct lineage of the men and women whose intellect and fortitude carried them to new heights and made America the greatest, proudest, most industrious and creative, wealthiest, productive and most generous nation on Earth.  We share our chromosomes with those pioneers who settled the West, tamed a wild country with roads, bridges and towns and brought law and order to the homeland.  We are the sons, daughters, grandsons and granddaughters of those who stood up to tyranny, no matter what the cost.  The genes of creators, inventors, hard workers, the educated, the warriors and those in service to others are an integral part of our DNA.

Real Americans are not whiners or losers; they are doers and winners.  They build and invent things. They excel at their chosen professions.  Americans are the givers and preservers of life, not the takers.  Americans believe that life is precious and a gift from God and its preservation is paramount.

Americans are the light to the rest of the world, not because we are better than anyone else, but because we live under the bright light of liberty that frees us to climb the highest mountains or jump off this once-giant planet into the vastness of space, where only the brave dare tread, in search of the secrets of our island Universe.

Heed not the doomsayers who warn us we are no longer an exceptional people or a country.  Pay no attention to those who say we are destroying the planet and that we must conserve and cut back.  The planet is big enough to handle us.  If man went extinct today the earth would heal itself in a thousand years or less.  A thousand years is nothing in comparison to the eons the earth has orbited the Sun.

Sure, there are things we can do to lessen our impact on the earth but we don’t have to return to the Dark Ages to do it, nor do we have to replace fossil fuels with ineffective, inefficient, government-subsidized and highly expensive wind and solar power on the trumped-up charge of man-caused global warming.  That’s not just stupid; it’s insane.

We have no choice but to find a way to right the situation peacefully, or we are in for a very long, protracted and bloody civil war, where the outcome is totally unpredictable and freedom may not be what we win in the end.  Let us not, once again, fall into the trap where we find that war, carnage, brutality and violence are the only way to regain our freedom.

Let us remember when brave Americans stood up against tyranny with their lives, their fortunes and their sacred honor over two centuries ago.  In their memory and sacrifice can present-day Americans do no less?   We call on all constitutional Americans to openly reject Progressivism, political correctness, collectivism, multi-culturalism, radical environmentalism and the one-world government and reject these things with all your heart and soul, or watch America succumb to the fatal disease of world socialism and planet-wide slavery.  The fate of liberty is in our hands.  If we fail, freedom fails.

We have set this powerful message of hope and freedom in a video entitled: “Is Civil War Inevitable on this 4th of July 2018?” including fireworks.  We do not believe it is inevitable, but it will take the combined, unified and courageous effort of all those Americans who still cherish freedom and are willing to defend it…..by any means.  An American civil war today will be a lost cause and only invite the two other super-powers to intervene and take us down.  And a civil war or revolution does not always end up in the birth or re-birth of freedom.  The history of revolutions tells a far different story.  (See “Revolutions“)

The question is, are these words just so much confetti in the wind that will be swept up from the streets tomorrow and thrown in the trash, or will this message ripple across the land like a wind-driven grassfire and light the fire of freedom in the hearts and minds of millions of Americans?  If not, then this effort isn’t worth one grain of sand on a never-ending sandy beach.

On this 4th of July:

Which of you will forward this message to others so that it goes viral across the land?

Which of you will sign our “Declaration of Individual Independence and a Reaffirmation of American Constitutional Sovereignty“?

Ron Ewart is a nationally-known author and speaker on freedom and property rights issues and author of his weekly column, “In Defense of Rural America.”  Ron is the president of the National Association of Rural Landowners (NARLO) (www.narlo.org), a non-profit corporation headquartered in Washington State, acting as an advocate and consultant for urban and rural landowners.  Affiliated NARLO websites are “SAVE THE USA” (http://www.stusa.us/).   Ron can be reached for comment HERE.

9 Responses to "If America Goes Socialist Is Civil War Inevitable?"