“THERE WILL BE TOTAL JOY” 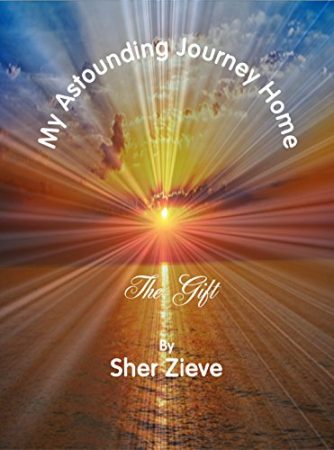 (Jun. 30, 2018) — Last week I had the pleasure of interviewing one of our long-time columnists, Sher Zieve, about her new book, “My Astounding Journey Home: The Gift.”

While I had spoken with Sher briefly and infrequently in the past, our interview not only gave me the opportunity to learn more about her life, her travels, and her writing, but also to gain insight into her reason for penning a book she said she “really did not want to write.”

A fast-moving narrative for even the slowest of readers, of whom I consider myself one, the book requires less than two hours’ time from prologue to epilogue.  Quoting extensively from Old and New Testament Scripture for emphasis, each chapter builds to the next until the reader discovers the nature of Zieve’s special “journey” at the age of 17.

Throughout her story, Zieve emphasizes her faith in God — the God of Abraham, Isaac and Jacob — and that He “not only exists but has been interactive in my life since I was a small child.”

That led her to describe her recollection, from the age of seven, of a celestial-type being, a young man, who became her guide and comfort in lonely and bewildering times.  Zieve explained that her companion described future life events which came to pass exactly as he had predicted.

Early in the book, she encourages “others who have had similar experiences” to share them with the world, as she now has at the age of 73.

Both during the interview and early part of the book, Zieve provides examples of how she was prepared for her special journey by a sudden “electricity” which galvanized her to save the lives of her younger sister and first husband, John, in separate incidents.

She was unable to save the life of her second husband, Richard, but wrote of his sudden and irreversible medical downward spiral that she was provided forewarning, enabling her to save her own.  Zieve has been a widow since March 18, 1989, when Richard died just hours before he was scheduled to undergo brain surgery.

Zieve said that as a result of her “journey home,” “I know what eternity is.”  “It’s a completely different area, outside of time and space,” she said.  However, as she also wrote in the book, she said “it was not a near-death experience.”

“I didn’t do drugs; I didn’t drink,” she said of the time of the occurrence.  “That was back in the olden days when we didn’t do that.”

When we asked what precipitated the event, she said that she and John were discussing their upcoming wedding, which their relatives wanted to be a large, gala affair, and considering if they should elope instead, when suddenly, “I simply wasn’t there anymore.”

The sights, sounds, colors and thoughts she recalls while “Home” were unlike anything on Earth, Zieve said, emphasizing throughout the conversation that the overarching sensation she experienced was one of “total joy.”

She equated “Home” with “heaven.”  While there, she said, “the physical universe didn’t exist.”  “At Home, the one thing I discovered is the theory of everything.  Stephen Hawking’s book gets into it a little bit.  But it’s not what this place was designed for.  Here, we have to look at things on a microcosmic level.  That’s kind-of one of the big deals of being here.  But at Home, you don’t.  If you want to know something, the answer comes back in every possible form it can be, allowing you to feel it so that everything is available to you on your level.”

She also said that at Home, “Love and learning are like food. Food as we know it here isn’t necessary.”

When we asked Zieve how long, in “earth” minutes, her journey Home took, she responded, “I felt as if I had been there forever.  When I finally came back into body — at the very end of the book — it was so beautiful.  At Home, you’re not male or female, but the being with me — I’ll call her ‘she’ — was weeping.  She was so concerned about me and said, ‘You’re going to have a very difficult life.’  I looked at her and felt the most intense need to comfort her.  I knew she was a family member but couldn’t say exactly who.  So I said, ‘It’s alright.  Will I be able to experience this total joy again?’ and she said, ‘In the end, there will be total joy.'”

“My Astounding Journey Home” is available in both hard-copy and Kindle format, although a Kindle device is not necessary.

One Response to "The Post & Email Interviews Sher Zieve, Author of “My Astounding Journey Home”"