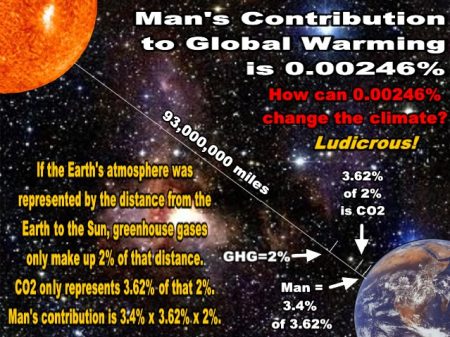 (Jun. 24, 2018) — “It is the greatest scam in history. I am amazed, appalled and highly offended by it.  Global Warming is a scam.  Some dastardly scientists, with environmental and political motives, manipulated long term scientific data to create an illusion of rapid global warming.”   —  John Coleman, TV Weatherman

The last thing we wanted to do was to write another man-caused global warming article.  But the evidence was so glaring it became an imperative.

Just how dumb do these climate alarmists think we are?  Perhaps if 2 + 2 = 4 is complicated math for someone, then maybe a simple 2 times 2 times = 4 is beyond their reach as well.

As the above image shows, the total greenhouse gases (GHG) in the atmosphere is just 2% and the climate scientists tell us it is increases in greenhouse gases that cause rising temperatures.  The scientists also tell us that CO2 is the major culprit in forcing the temperature increase.   But of that 2% of greenhouse gases, carbon dioxide (CO2) is only 3.62% of that 2%.  Man’s contribution to GHG is 3.4%, of that 3.62%, of that 2%, or 0.00246%.  Even if CO2 in the atmosphere is the great forcer of climate change, as climate scientists would have us believe, man’s contribution to that force is so miniscule as to be well within the statistical measurement error rate.

There seems to be ample evidence that the climate is warming.  The pole ice caps seem to be shrinking and land glaciers are retreating.  Allegedly, sea levels are rising.  But those who can prove beyond a shadow of a doubt and with absolute certainty that man is causing these events are living in a deep mine where the Sun doesn’t shine.

There are so many variables causing atmospheric temperatures to rise and fall, it is virtually impossible, even with the most powerful computers, to model all of the variables affecting the planet’s climate.  Besides the Sun, greenhouse gases and the effects of man, there is the cloud cover, water vapor, ocean currents, volcanic eruptions, forest fires, variations in heat absorption of the land and sea masses, ocean absorption of CO2, CO2 absorption by tree and plant life, nocturnal radiation to space, the earth’s orbit around the Sun and polar wobble, earth’s ice changing weight load at the poles, earth’s internal core changes, extra terrestrial radiation, shifting gravity and magnetic fields and a whole host of other influences that defy computer modeling.  The Earth’s climate is a non-linear dynamic system, being acted upon by wide ranges of many variables. It makes long-range predictions of climate patterns with computer models wild guesses at best.

Let’s take forest fires.  From an article in Live Science we learn:

Large wildfires in the Western United States can pump as much carbon dioxide into the atmosphere in just a few weeks as cars do in those areas in an entire year, a new study suggests.

As forest fires devour trees and other plants, they release the carbon stored in the vegetation into the atmosphere.

Scientists at the National Center for Atmospheric Research (NCAR) and the University of California used satellite observations of fires and a computer model to estimate just how much carbon dioxide is released based on the amount of vegetation that is burned.”

Overall, the study estimated that fires in the contiguous United States and Alaska release about 290 million metric tons of carbon dioxide a year, which is about 4 to 6 percent of the amount of the greenhouse gas that the nation releases through fossil fuel burning.

These fires can contribute a larger proportion of the carbon dioxide released in several western and southeastern states, including Alaska, Idaho, Oregon, Montana, Washington, Arkansas, Mississippi and Arizona.

After devastating wildfires in southern California, the NCAR study’s author, Christine Wiedinmyer, analyzed the emissions with the model. She estimated that the fires emitted 7.9 million metric tons of carbon dioxide in one recent fire from Oct. 19 through Oct. 26, the equivalent of about 25 percent of the average monthly emissions from all fossil fuel burning in the entire state of California.

“Enormous fires like this pump a large amount of carbon dioxide quickly into the atmosphere,” Wiedinmyer says. “This can complicate efforts to understand our carbon budget and ultimately fight global warming.”

Exactly what the impacts of fire emissions on climate change are unclear, as vegetation tends to grow back over the scorched area and may absorb as much carbon dioxide as was released during the blaze.

Once again, the uncertainties in modeling wildfire contributions to overall CO2 emissions are mathematically significant.

Then there are volcano eruptions that spew massive quantities of carbon dioxide into the atmosphere along with other gases like sulfur dioxide and methane.  There is no way to predict the volume of CO2 emissions from a single volcanic eruption, nor is their a way to predict how many eruptions there will be in any given period.

The earth wobbles around its axis.  It’s called polar or axial precession.  Because of the gravitational influences of the Sun and the Moon, the axis of the earth points into the stars and wobbles in a circular motion in an approximate 25,700-year cycle.  Where the axis of the earth points to the heavens has a direct effect on how much land surface is exposed to the Sun receiving solar radiation.  Once again, man has nothing to do with axial precession.

Then there are all the other variables that can have a profound effect on the earth’s climate.  Yes, there appears to be evidence of global warming, but the question is, is man’s miniscule contribution to CO2 in the atmosphere the cause.  Based on the uncertainties in climate science, the question appears to be up for grabs.

All of this could very well be a natural cycle driven by a variety of elements that defy computer modeling and all evidence of man-caused global warming comes from questionable computer models.

And what about how the effects of a warming climate have on food production?  Global warming enhances food production.  It’s hard to grow things at temperatures below 50 degrees.  The longer the growing season the greater the yield.  Our worst enemy will be global cooling.

In an article in the Daily Signal, their concern revolves around what man is spending to solve a problem that may have human component:

Perhaps the most alarming part is the price tag associated with attempting to reduce such a small part of the atmosphere and something we really cannot control. Our analysis shows the cumulative GDP losses for 2010 to 2029 approach $7 trillion. Single-year losses exceed $600 billion in 2029, more than $5,000 per household. Job losses are expected to exceed 800,000 in some years, and exceed at least 500,000 from 2015 through 2026. It is important to note that these are net job losses, after any jobs created by compliance with the regulations–so-called green jobs–are taken into account. In total, the “climate revenue” (read: energy tax) could approach two trillion over eight years. Keep in mind, this is all for negligible environmental benefits.

The science behind global warming is anything but conclusive. Many leading climatologists conclude that climate models aren’t incredibly accurate and even have different opinions (for instance whether it is the sun or oceanic changes) as to what the dominant causes are of global warming and cooling.

There’s a much more important issue that poses an even greater danger to mankind. That’s the effort by environmentalists to suppress disagreement with their view. According to a March 11 article in London’s Sunday Telegraph, Timothy Ball, a former climatology professor at the University of Winnipeg in Canada, has received five death threats since he started questioning whether man was affecting climate change. Richard Lindzen, professor of Atmospheric Science at MIT, said, “Scientists who dissent from the alarmism have seen their funds disappear, their work derided, and themselves labeled as industry stooges.” Nigel Calder, a former editor of New Scientist, said, “Governments are trying to achieve unanimity by stifling any scientist who disagrees. Einstein could not have got funding under the present system.”

Suppressing dissent is nothing new. Italian cosmologist Giordano Bruno taught that stars were at different distances from each other surrounded by limitless territory. He was imprisoned in 1592, and eight years later he was tried as a heretic and burned at the stake. Because he disagreed that the Earth was the center of the universe, Galileo was ordered to stand trial on suspicion of heresy in 1633. Under the threat of torture, he recanted and was placed under house arrest for the rest of his life.”

The Paris Climate Accord (PCA) is a monumental joke and it was a wise decision by President Trump to drop out of the accord.  American citizens would have endured the largest share of the cost.  China and India, the worst polluters, would have gotten off almost scot-free.  If any of the predictions from the PCA are even remotely accurate, which is in grave doubt, the total benefit, if all nations participated, would be to keep the temperature rise within 1.5o Centigrade.

Now we are not rocket scientists but we have read over 100 science books covering several different disciplines, including mathematics, physics, chemistry, astronomy, quantum theory, string theory and chaos theory and related subjects.  We can easily solve the equation of 0.034 times, 0.0362 times, 0.02 that equals man’s contribution to greenhouse gases in the atmosphere.  The answer is 0.000024616.  We’ll give you an idea of how small that number is.  The Empire State Building is 1,250 feet from street level to roof.   0.0000246 of 1,250 feet is 3/8ths of an inch.  The ants on Fifth Avenue in Manhattan, where the Empire State building resides, are almost that high.

So those poor saps that have difficulty with simple math are supposed to believe that man’s 0.0024616% contribution to the Earth’s greenhouse gas concentrations in the atmosphere are the direct cause of run-away global warming.  Perhaps if we were teaching common sense, logic and critical thinking in our schools, the masses wouldn’t be so quick to believe all the politically-driven environmental propaganda that is being shoved down their throats every day.

We have many ARTICLES on our website debunking the man-caused global warming myth, articles you will never see in the mainstream media, or in public schools, or on college campuses, because they are being censored by American Marxists, socialists, communists and Democrats.