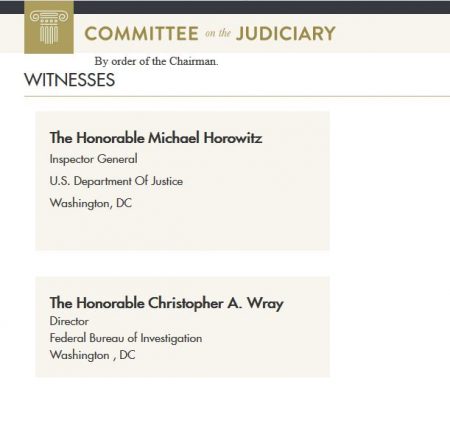 The hearing is titled, ““Examining the Inspector General’s First Report on Justice Department and FBI Actions in Advance of the 2016 Presidential Election” and was rescheduled twice as a result of delays in Horowitz’s highly-anticipated report released last Thursday.

Consisting of 568 pages, the report faults former FBI Director James B. Comey for “insubordination” and exposes his use of a private email account to conduct government business as it examined how the Justice Department and its subsidiary, the FBI, handled the probe into former Secretary of State Hillary Clinton’s use of a private email server.

Although including clear examples of bias on the part of a number of FBI agents in their communications with one another, Horowitz found no documentary evidence that political bias affected the FBI’s ultimate decision not to recommend that Clinton be prosecuted for sending classified information over the unsecured server based in her home.

Horowitz’s findings included the acceptance of dinners, event tickets and other perks by some FBI agents from members of the media in exchange for leaks of information. Horowitz referred a total of five agents to the agency’s Office of Professional Responsibility (OPR) for further scrutiny, as he did in an earlier report scrutinizing, among other things, the conduct of former FBI Deputy Director Andrew McCabe.

The OPR recommended McCabe’s termination, which took place in mid-March. As a result of that IG report, McCabe was referred for possible criminal prosecution to the U.S. attorney for the District of Washington, DC.  McCabe has denied the accusations and last week filed a lawsuit against his former employer, the DOJ and Horowitz.

Thursday’s report also faulted former Attorney General Loretta Lynch for failing to obtain from Comey (pp. 6-7) the essence of what he planned to say at the July 5, 2016 solo presser he held during which he enumerated a litany of potentially criminal actions on Clinton’s part but then claimed that “no reasonable prosecutor would bring such a case.”

Some believe that the Clinton probe concluded hastily so that politically-driven FBI employees such as then-counterintelligence deputy Director Peter Strzok, could concentrate on pursuing the counterintelligence investigation against the Trump campaign as the 2016 election drew nearer.  In the IG report, Strzok and his former paramour Lisa Page are noted to have exchanged extensive text messages expressing a desire to alter the outcome of the presidential election if Trump were to win.

Strzok was involved in the Clinton email probe, interviewing Clinton on July 2, 2016, and served on Special Counsel Robert Mueller’s investigation until Horowitz Discovered some of his anti-Trump text messages. According to the report (p. 9), Strzok also delayed taking action for 30 days on the finding by the FBI New York Field Office of approximately 350,000 emails on the laptop of former Congressman Anthony Weiner, the husband of Clinton’s confidant and employee, Huma Abedin.

According to Strzok’s attorney in a letter sent to House Judiciary Chairman Robert Goodlatte on Saturday, Strzok is willing to testify to any congressional committee without a subpoena or a request for immunity.  On Monday morning, constitutional attorney Jonathan Turley told the hosts of “Fox & Friends” that it is likely that Strzok has been cooperating with Horowitz’s office as it probed the FBI’s Clinton investigation.

It does not appear that the Senate Judiciary Commitee will live-stream the hearing.