“THE DEADLINE IS THIS WEEK” 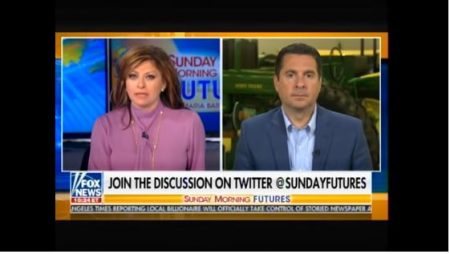 (Jun. 17, 2018) — In a June 17 interview on “Sunday Morning Futures” with Maria Bartiromo, House Intel Committee Chairman Devin Nunes (R-CA22) said that if the Justice Department does not begin releasing subpoenaed documents beginning on Monday, the entire House of Representatives will “take action” against its top officials and specifically, Deputy Attorney General Rod Rosenstein.

As various congressional committees have issued requests, and later subpoenas, for documents they say they need to complete their independent investigations of conduct at the DOJ and its subsidiary, the FBI, Rosenstein has pushed back, saying that he “will not be extorted.”  Rosenstein exerts control over any documents related to the Trump-Russia investigation since Attorney General Jeff Sessions recused himself early last year from anything associated with Russia.

The Intel committee first requested documents last August associated with the launch of the FBI’s investigation into the Trump campaign amid purported claims of “collusion” with Russian-government operatives.  Last month The Washington Post and The New York Times confirmed that the FBI probe involved the dispatching of one or more “informants” to interact with Trump aides, unbeknownst to Trump or any of his campaign officials.

For months, the Justice Department has flouted the efforts of Nunes and other committee chairmen seeking documents generated by not only the FBI’s Trump campaign probe, but also alleged abuse of the FISA law wherein Justice and FBI officials provided an unverified “Russia dossier” to the court to obtain a surveillance warrant without revealing its political origins.

The initial warrant, granted in October 2016, was renewed three times, with Rosenstein signing off on the final application submitted in June of last year.  Page has said he did nothing wrong and has not been charged with a crime, although he has done business and given speeches in Russia.

“We’ve asked for documents as it relates to that,” Nunes told Bartiromo of the surveillance warrants on Page.  He also said that House Oversight Committee Chairman Trey Gowdy told the DOJ that “if there was any vectoring of any informant or spies or whatever you want to call them into the Trump campaign before the investigation began, we better know about it by Sunday, meaning today.”

The FBI has said that it began its “counterintelligence” probe into the Trump campaign on July 31, 2016, but that timeline has been called into question by reports that an informant associated with Cambridge University in the UK made contact with Page and at least two other campaign associates significantly earlier.

Later in the interview, Nunes appeared sure that an unofficial investigation had already been launched prior to July 31, 2016.  He said that FBI counterintelligence deputy Peter Strzok and FBI attorney Lisa Page had done “lots and lots of bad things” which he believes strengthens his and others’ requests for DOJ documents.

After several starts and stops of document production on the part of the DOJ, Nunes set a deadline of last Tuesday for subpoenaed documents which came and went, although subsumed by President Trump’s summit with North Korea’s Kim Jong-Un.  Nunes reminded Bartiromo that multiple deadlines have been ignored.

Las month, the DOJ told Nunes that it was willing to meet with him and members of the congressional “Gang of Eight,” which consists of the chairman and ranking member of four key congressional committees, individuals who normally receive briefings of classified information. Such a meeting took place but did not satisfy Nunes, who said that none of the requested documents was produced at the time.

Democrats were quick to tell the press that at that meeting, they saw “no evidence” of a “spy” having been placed “inside” the Trump campaign.

Last Wednesday, Nunes confirmed to radio and TV commentator Sean Hannity that Rosenstein has retaliated against at least one staffer on his committee by “threatening” and “kicking them out of the room.”  “This has been going on since last August…We’ve had many — what I would say — altercations with the deputy attorney general and his staff,” Nunes said at the time.

“If documents do not begin to be turned over tomorrow, and a clear way and path forward for everything else is not clear here in the next couple days, there’s going to be he** to pay by Wednesday morning,” Nunes continued.  “This is going to go from just myself and a few committee chairmen to all the members of the House of Representatives, who are going to begin to take action against the Department of Justice and FBI.”

In the wide-ranging interview, Nunes told Bartiromo that the Justice Department has been leaking information about its own investigations, “while at the same time they’re not giving information to Congress.”   Raising his voice, Nunes said that “a major leak of a classified meeting” he and Gowdy had with Justice Department officials purposely mischaracterized the fact that they were not provided time to review the documents during the meeting.  “They did that to embarrass the Speaker of the House and myself and Chairman Gowdy…That came from the top at the Department of Justice,” Nunes said.  “I’m tired of the threats; I’m tired of the leaks,” he added with emphasis.

Nunes confirmed that he, Gowdy, Speaker of the House Paul Ryan and DOJ/FBI officials met again on Friday.  “Our staffs are supposed to meet on Monday, and all the subpoenas are supposed to be complied with this week,” he said.  However, he added, “My confidence level is extremely low that DOJ and FBI are going to comply” and if they do not, he said, the U.S. House of Representatives “will have to take other action.”

The options there, Nunes said, include passing a resolution, initiating Rosenstein’s impeachment, or holding him in contempt of Congress.

A full transcript of this morning’s show is here accompanied by the video of the exchange.