“BOTH A COVER-UP AND AN EXPOSÉ AT THE SAME TIME” 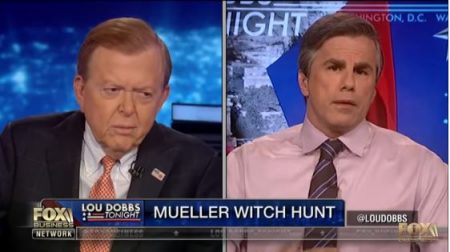 (Jun. 13, 2018) — On Friday, government-watchdog Judicial Watch’s president, Tom Fitton, spoke with Fox Business’s Lou Dobbs about the additional indictments of former Trump campaign manager Paul Manafort; the Mueller investigation, which resulted in Manafort’s multiple indictments by a federal grand jury; the “corruption” Fitton said he took place within the Justice Department “under Obama”; the leaking of classified information to the mainstream media; and the Department’s inspector general’s report, expected to be made public on Thursday.

The IG report, nearly 18 months in the making, is said to focus on whether or not there was political influence within the FBI and Justice Department as it investigated former Secretary of State Hillary Clinton’s use of a private email server over which she sent classified information which was almost certainly compromised.

When Dobbs asked Fitton about his “expectations” of the report, Fitton responded, “There’ll be good and bad in it for both sides; Hillary Clinton’s going to feel vindicated because it criticizes Comey for going after her inappropriately…”

He did say, however, that the report will contend that the FBI “mishandled” the Clinton email server probe.

“Any IG report is usually both a cover-up and an exposé at the same time,” Fitton concluded, stating that Congress and his own organization “still need to take action to clean up the corruption that took place under Obama and that continues today.”

During the 8:40 p.m. EDT segment of Wednesday’s “Tucker Carlson Tonight,” Carlson hosted journalist Glenn Greenwald, who said that he expects the IG report to heavily criticize top Obama FBI and Justice Department officials’ actions in regard to the Clinton investigation and other associated events.

In June 2016, then-Attorney General Loretta Lynch met with former President Bill Clinton on an Arizona tarmac in what was said to be a chance encounter but which a FOIA lawsuit launched by JW ultimately revealed angered FBI agents for its having been leaked to the media rather than its inappropriateness given that Clinton’s wife was under investigation by the Justice Department at the time.

One of the agents exchanging emails about the leak to the media of the Lynch-Clinton meeting was Peter Strzok, who also interviewed Hillary Clinton for the FBI’s probe and served for a time on the Mueller “Russia” investigation until DOJ Inspector General Michael Horowitz discovered politically-charged text messages exchanged between Strzok and his paramour, FBI staff attorney Lisa Page.

Page resigned from the agency in early May, while Strzok was demoted to working in the Human Resources Department.

Lynch had told the public that she and Bill Clinton discussed “golf” and “grandchildren” during their tarmac encounter, although she added that if the same circumstance presented itself, she “certainly wouldn’t do it again.”