“WE WILL ALL KNOW SOON” 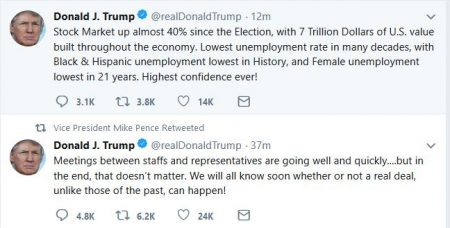 “Meetings between staffs and representatives are going well and quickly…but in the end, that doesn’t matter,” Trump tweeted.  “We will all know soon whether or not a real deal, unlike those of the past, can happen!”

The summit is scheduled for 9:00 p.m. EDT/9:00 a.m. Tuesday Singapore time.  Late Monday afternoon, radio and television host Sean Hannity announced that he will be interviewing the president after the summit, which may last between 45 minutes and two hours, according to various reports.

“Stock Market up almost 40% since the Election, with 7 Trillion Dollars of U.S. value built throughout the economy.  Lowest unemployment rate in many decades…,” Trump’s next tweet began about 25 minutes later.  The statistics he cited repeated the claims made by the President’s Council of Economic Advisers Kevin Hassett during a White House press conference last week.

Surprisingly, this writer was able to find only one recent domestic report corroborating the administration’s claim — at CNBC, which focuses on business and economic issues — dated January 18, 2018.

An article in the (UK) Financial Express reported on Hassett’s June 6 presentation at the White House briefing.

Trump is hoping to convince Jong-Un, whose regime has been developing nuclear weapons for decades, to abandon his nuclear ambitions.  Secretary of State Mike Pompeo has indicated that in return, the Trump administration would assure him Jong-Un’s security.  Details of what that proposal might look like have not yet been released.

Both Pompeo and Trump have stressed that Trump will “walk away” from the meeting if he finds Jong-Un to be insincere in his reported newly-found desire to dismantle his nuclear capabilities.

A few minutes after 6:00 p.m. EDT, Trump tweeted that North Korea’s “missle launches” [sic} have been discontinued by the regime and reminded his followers that three hostages held in the country, each for between one and two years, were released on May 10 and returned to the United States.

That tweet, issued just three hours before the scheduled start of the summit, called his detractors “haters & losers.”