“THIS MAN CAN NOT BE PRESIDENT” 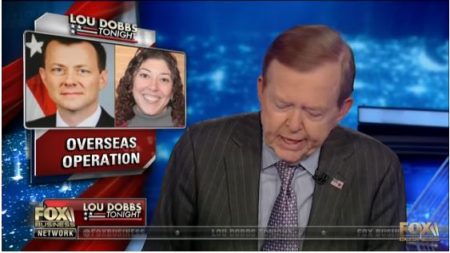 On Monday the Senate released 502 pages of documentation containing the texts.  Since early last year, a number of congressional committees have been requesting documents from the Justice Department and FBI pertaining to the Clinton and Trump-Russia “collusion” investigations.  The document release is labeled “Appendix C” by the Senate.

Strzok is reportedly still employed at the FBI in the Human Resources division, while Page resigned early last month. Thousands of texts exchanged between the two, who were said to be romantically-involved at the time, were discovered by the Justice Department’s inspector general, Michael Horowitz, during the course of his investigation into the FBI’s handling of its probe into Hillary Clinton’s use of a private email server during her time as secretary of state.

While all of the texts have not yet been made public, some show what appears to be a plan to thwart the Trump presidential campaign, with the newest texts under discussion by Dobbs and Farrell, dated December 28, 2015, referencing “oconus lures.”

The release of a highly-anticipated report by Horowitz has been delayed approximately two weeks, and it is unclear if the documents released by the Senate are part of that report, which was disseminated to Congress as well as FBI and DOJ individuals whose names were included for review and possible redactions. During his broadcast, Dobbs reported that the FBI redacted the word “lures” but that the IG did not, suggesting that the newly-released documents may emanate from the IG’s report.

Farrell, who has a military counterintelligence background, said that “oconus” stands for “outside the continental United States” and signals that a “double-agent operation” was at work against the Trump campaign.

Farrell referred to an “executive order” which he said was breached by the agents as well as “violations of law.”  “This is intelligence tradecraft applied against a candidate to steal an election,” he told Dobbs.

Last month The Washington Post and The New York Times confirmed that an “informant” was dispatched by the FBI to interact with at least three members of the Trump campaign:  Sam Clovis, George Papadopoulos, and Carter Page. Papadopoulos has since pleaded “guilty” to lying to the FBI during his questioning as part of the FBI’s Russia “collusion” investigation.

Former Trump campaign aide Michael Caputo has said on the FNC “Hannity” show that there was more than one “informant.”  He said that he was personally approached with a “lure” of sorts concerning an unspecified batch of Clinton’s emails.  Caputo said he did not indicate interest in the “lure.”

On Tuesday, investigative reporter Sara A. Carter reported that Justice and FBI interested parties are attempting to “slow-roll” the ultimate release of the report to the public.

On page 4 of the new documentation, former FBI Director James Comey is seen writing to his then-chief of staff, James Rybicki, with a draft of what he proposed to say at a press conference which he ultimately delivered alone on July 5, 2016.  During the presser, he exonerated Clinton of any criminal wrongdoing as allegedly investigated by the agency he led.

Although Comey told the public on that date that “no reasonable prosecutor would bring such a case,” the draft originally said that the FBI’s findings would be turned over “to the Department of Justice for a prosecutive decision.”

It is believed that Strzok played a prominent role in the Clinton email investigation.  The texts specifically discussed by Dobbs and Farrell are on page 53 of the Senate’s release.  A word search resulted in no other occurrences of the acronym”oconus.”

On page 24, Strzok and Page are seen discussing Trump’s and other candidates’ remarks made during the 2016 campaign season, with one saying, referring to Trump, “This man can not be president.” [sic]  [Editor’s Note:  The texts are not labeled as to who is texting who, and obscenities are frequently invoked.]

There are numerous references to “Andy,” who is probably former FBI Deputy Director Andrew McCabe, for whom Page worked.

On page 232 of the PDF (p. 22 of text section), Page and Strzok discussed Trump’s Republican primary win and consequent need for them to “finish MYE.”  “MYE” stands for “Mid-Year Exam,” the FBI’s code name for the Clinton email investigation.

On page 306, Strzok appears to confirm with Page that she planned to “leave” the FBI “when Andy does.” McCabe was fired in mid-March for allegedly lying under oath as part of the IG’s investigation.

Another conversation about the general election between Strzok and Page contains respective references to “sandernistas” and WikiLeaks founder Julian Assange, who either Page or Strzok feared could “take fed information and disclose it to disrupt.”