(May 31, 2018) — At approximately 9:21 AM EDT on Thursday, President Donald Trump tweeted that he will be issuing a “full pardon” to author, filmmaker and commentator Dinesh D’Souza.

D’Souza was prosecuted by then-US attorney for the Southern District of New York Preet Bharara, and Obama appointee, who Trump fired last year as he was in the process of replacing US attorneys across the country.

On May 20, 2014, D’Souza pleaded guilty to contributing to a U.S. Senate candidate’s campaign “in the names of others.”  He was sentenced to five years of probation, a $30,000 fine and eights month in a “confinement center.”

D’Souza went on to produce “2016: Obama’s America,” a film released prior to the 2016 election which many said left them with a strong impact.

D’Souza and others had claimed that he was “selectively prosecuted” by Bharara and the Obama regime, a claim Bharara said was “baseless” at the time.

In his Twitter announcement, Trump wrote, “Will be giving a Full Pardon to Dinesh D’Souza today. He was treated very unfairly by our government!”

In other tweets Thursday morning, Trump wrote that “Very good meetings with North Korea” took place on Wednesday, referring to a dinner meeting between U.S. Secretary of State Mike Pompeo and former North Korean intelligence official Kim Yong-Chol, who traveled to New York in an apparent effort to signify North Korea’s continued willingness to attend a June 12 planned summit in Singapore with Trump.

Although Trump withdrew from the meeting last week, he has indicated a desire to meet with North Korean dictator Kim Jong-Un in order to achieve his goal of denuclearization of the Korean Peninsula.

Trump also tweeted that he did not fire former FBI Director James Comey “because of Russia” as is alleged in mainstream news reports Thursday morning. “The Corrupt Mainstream Media loves to keep pushing that narrative, but they know it is not true!” Trump tweeted.

At approximately 9:49 AM EDT, D’Sousza tweeted that he will soon be releasing a new movie “in time for the midterm elections!” 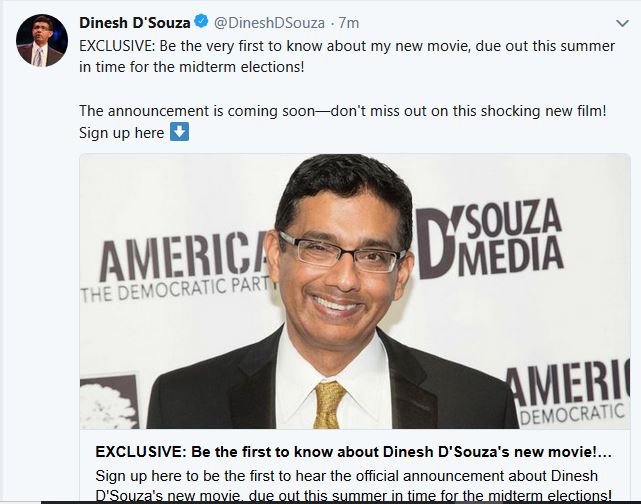 Breaking: Trump to Pardon Dinesh D’Souza added on Thursday, May 31, 2018