NUMEROUS TOPICS COVERED PRIOR TO DEPARTURE FOR LONG ISLAND 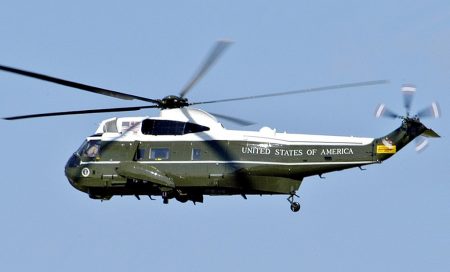 (May 23, 2018) — In unscripted comments made to reporters Wednesday prior to his departure for Long Island to attend a roundtable discussion on gang activity and illegal aliens, President Donald Trump shouted responses to reporters questioning him about allegations of an FBI informant planted in the campaign; NAFTA negotiations; Deputy Attorney General Rod Rosenstein, and an anticipated report from the DOJ inspector general in which Trump said he expects former FBI Director James Comey to be fingered for wrongdoing.

Trump fired Comey on May 9, 2017 upon Rosenstein’s recommendation.  However, many House Republicans now see Rosenstein as an obstructionist regarding their repeated requests, at times followed by subpoenas, for documents related to several ongoing investigations, including Hillary Clinton’s use of a private server when she was Obama’s secretary of state and alleged “collusion” between Trump aides and the Kremlin.

Against the sound of the spinning propellers of Marine One, reporters’ shouted questions could not be heard in the video replay of the exchange, which was aired by Fox News a few minutes after it occurred.

In his comments, Trump emphasized that he wants “transparency” within the FBI and Justice Department, whose leaders he met with on Monday afternoon at the White House in the persons of Rosenstein and FBI Director Christopher Wray.  “I want total transparency,” Trump said, adding that he believes that Rosenstein and Wray do as well.

One week ago, The New York Times confirmed that “an informant” was used by the FBI to glean information from at least one Trump campaign aide in 2016, a revelation which Trump now refers to as “Spygate.”  In an editorial at The Hill on Wednesday, investigative journalist Sharyl Attkisson wrote that she has identified “8 signs pointing to a counterintelligence operation deployed against Trump’s campaign.”

Fox News also reported Wednesday that Nunes and Gowdy will be meeting with “top Intel officials” on Thursday specifically about the “informant.”

On Tuesday, former Trump aide Michael Caputo said he was approached during the campaign by a different individual who attempted to entice him with information and the possible provision of some of Hillary Clinton’s emails.  Caputo said he declined to accept the offer and did not inform Trump about the exchange.

During his exchange with reporters, which lasted approximately two minutes, Trump said he “did a great favor” to the country by firing Comey in May of last year.  He said that he believes rank-and-file FBI agents who he considers to be hardworking and dedicated are better off without Comey, who Trump called a “grandstander” the day he fired him.

On Tuesday, The Daily Caller reported that certain FBI agents have gone on the record, through third parties, to say that they wish to be subpoenaed by Congress to testify as to “problems caused by former FBI Director James Comey and former Deputy FBI Director Andrew McCabe.”  “These agents prefer to be subpoenaed to becoming an official government whistleblower, since they fear political and professional backlash,” The DC was told by a person identified as a former Trump administration official who remains in touch with the agents.

A 24-year former FBI Assistant Director wrote last month, after Comey began his “book tour,” that Comey’s “actions are unworthy of the storied law enforcement agency I served for close to a quarter of a century, and they shocked many of us who worked with and around him during his years serving in the Department of Justice.”

Trump also hinted that a new development stemming from NAFTA negotiations beneficial to U.S. autoworkers is forthcoming and that he will know by “next week” if his planned face-to-face meeting with North Korean dictator Kim Jong-Un will take place on June 12 as scheduled.