OF WHOM ONE REMAINS IN GOVERNMENT SERVICE 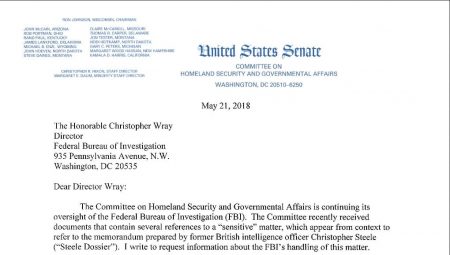 (May 22, 2018) — On Monday, Homeland Security and Government Affairs Committee Chairman Ron Johnson (R-WI) wrote a letter to FBI Director Christopher Wray requesting additional documentation of what was termed the “sensitive matter team” in a group of emails Johnson said the committee received “recently.”

The emails were exchanged among top leadership at the FBI in early 2017, prior to Donald Trump’s inauguration on January 20.

Rybicki resigned in January; Comey was fired on May 9, 2017; Yates was fired in late January 2017 after she instructed her department not to uphold Trump’s first travel ban issued days after he took office.  McCabe was fired in March, then referred for criminal investigation to the U.S. Attorney in Washington, DC after the DOJ inspector general found evidence that he had been untruthful during sworn testimony in connection with the Hillary Clinton email server investigation.

McCabe has denied any wrongdoing and raised more than a half-million dollars through a GoFundMe account to pay his legal expenses.

Earlier this month, Baker, who had been “reassigned” under FBI Director Christopher Wray, resigned and reportedly was hired by the Brookings Institution.  On the same day, it was reported that an FBI attorney assigned to McCabe’s office, Lisa Page, resigned from the agency.

Last July, Circa reported that Baker was under investigation for possibly “leaking classified national security information to the media.”

Page had reportedly been romantically involved with FBI counterintelligence agent Peter Strzok, who, according to The New York Times in an article published last week took part in what appears to be the early stage of the opening of an investigation into the 2016 Trump presidential campaign.

Public reports say that when DOJ Inspector General Michael Horwitz discovered politically-charged emails between Strzok and Page, the former was removed from his role in the investigation led by former FBI Director Robert S. Mueller into possible “collusion” between Trump campaign aides and Russian operatives. Page had earlier served on Mueller’s team but had reportedly already resumed her work at the FBI.

According to Axelrod’s LinkedIn profile, he is currently employed at Linklaters, where he is a “Partner in the firm’s Dispute Resolution practice, focusing on cross-border investigations and the defense of financial institutions, corporations, and executives who are under investigation by the U.S. Department of Justice (DOJ), the U.S. Securities and Exchange Commission (SEC), or other enforcement agencies.“

He describes his time with the Justice Department as:

In a footnote on page 1 of his letter to Wray, Johnson referenced then-FBI Michael Kortan Public Affairs Director and David Bowdich as having been included in some of the emails.  Kortan retired in February.  However, Bowdich is now deputy director, with the FBI stating that he “oversees all FBI domestic and international investigative and intelligence activities.”

According to investigative reporter Sharyl Attkisson, Kortan had “served as an aide to Special Counsel Robert Mueller,” although it is unclear to this reporter whether that service was before or after Kortan’s retirement from the FBI.

Mueller was director of the FBI from September 2001 to September 2013 and was designated “Special Counsel” by Deputy Attorney General Rod Rosenstein in May 2017, six days after Comey’s firing.

In a reiteration of some of the emails now in the committee’s possession, Johnson reflected a January 6, 2017 email from Rybicki to “unspecified recipients” indicating that “the director” (Comey) “is coming into HQ briefly now for an update from the sensitive matter team.”

The “sensitive matter” appears to be the “Dossier” compiled by former British MI6 agent Christopher Steele from questionable sources which was used as evidenced to request surveillance warrants on then-Trump foreign-policy advisor Carter Page beginning in 2016.

In a timeline, Johnson then wrote that Comey met with then-President-Elect Trump, a meeting which appears to have been initiated by Comey.  In a June 8, 2017 “Statement for the Record” submitted to the Senate Intelligence Committee prior to his testimony, Comey said of the January 6, 2017 meeting, in part:

After explaining the nature and purpose of a “counterintelligence” investigation, Comey wrote: 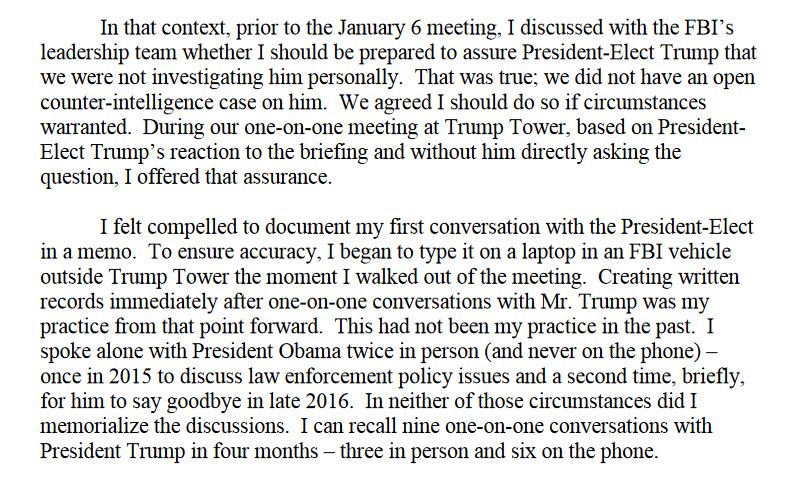 According to Johnson’s letter, the day after his meeting with Trump, Comey shared with “senior FBI leadership” that he “executed the session exactly as I had planned.” He said he explained to Trump that CNN had knowledge of something, apparently concerning the FBI, that it was seeking to publish once it identified “a news hook.”

On January 8, 2017, McCabe titled the subject line of an email with “Flood is coming” and indicated his knowledge that CNN had acquired information about Comey’s meeting with Trump.   He referred to CNN’s impending publication as presenting a “sensitive story.” (emphasis in original)

Johnson continued his timeline of emails and events:

McCabe was reported by the DOJ Inspector General of having leaked information on the Hillary Clinton email investigation to the press.  In sworn testimony to the Senate Intelligence Committee on June 8, 2017, one month after he was fired, Comey admitted leaking at least one of his seven memos memorializing his meetings with Trump to a “friend” who then shared the contents with a New York Times reporter.

“Didn’t do it myself, for a variety of reasons,” Comey testified. “But I asked him to, because I thought that might prompt the appointment of a special counsel. And so I asked a close friend of mine to do it.”  At the time, ABC News reported that Columbia University School of Law Professor Daniel Richman was “an adviser” to Comey, but it has since become public that Richman enjoyed “SGE” (special government employee) status, reportedly on an unpaid basis, with the FBI.

Clapper has also been accused of leaking to the press after stating in a January 11, 2017 press release, now unavailable to the public through official channels:

This evening, I had the opportunity to speak with President-elect Donald Trump to discuss recent media reports about our briefing last Friday. I expressed my profound dismay at the leaks that have been appearing in the press, and we both agreed that they are extremely corrosive and damaging to our national security.

We also discussed the private security company document, which was widely circulated in recent months among the media, members of Congress and Congressional staff even before the IC became aware of it. I emphasized that this document is not a U.S. Intelligence Community product and that I do not believe the leaks came from within the IC. The IC has not made any judgment that the information in this document is reliable, and we did not rely upon it in any way for our conclusions. However, part of our obligation is to ensure that policymakers are provided with the fullest possible picture of any matters that might affect national security.

President-elect Trump again affirmed his appreciation for all the men and women serving in the Intelligence Community, and I assured him that the IC stands ready to serve his Administration and the American people.

Clapper admitted in testimony to the House Intelligence Committee that he spoke to CNN’s Jake Tapper about the dossier “after it was out.” “It wasn’t like this is an Intelligence Community document or anything,” he testified.

In March 2013, Clapper told the Senate Intelligence Committee that the intelligence community did not “wittingly” collected the communications of American citizens within the U.S.. However, three months later, he was proved to have been untruthful when Edward Snowden disclosed the breadth and depth of the collection of phone calls, emails, and other communications exchanged daily among Americans not suspected of engaging in any criminal activity collected by the National Security Agency (NSA).

At the time of Clapper’s testimony to the committee, Mueller, who was still FBI director, also testified.

Clapper is now a commentator at CNN.