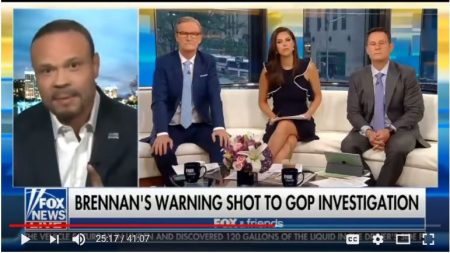 Brennan had called Trump “self-serving” and addressed an appeal to Speaker of the House Paul Ryan and Senate Majority Leader Mitch McConnell to intervene in Trump’s request of the Justice Department to investigate whether or not the FBI conducted politically-motivated surveillance on his campaign.

Beginning on May 8, 2018, The Washington Post reported that the identity of a “top-secret intelligence source” described as “a U.S. citizen who has provided intelligence to the CIA and FBI” who played a “role”  in the Russia collusion investigation now led by Robert Mueller was sought by Republicans in the House of Representatives from the Justice Department, which reportedly claimed, along with “senior FBI and intelligence officials, that “turning over the information could contradict years of policy about protecting intelligence sources, according to three people familiar with the matter.”

At the same time, the article reported, “It’s not clear what documents [House Intelligence Committee Chairman Devin] Nunes requested in his classified April 24 letter to the Justice Department. He told reporters this week that he is investigating the FBI’s abuse of the Foreign Intelligence Surveillance Act ‘and other matters.’”

In mid-July 2016, a retired American professor approached an adviser to Donald Trump’s presidential campaign at a symposium about the White House race held at a British university.

The professor took the opportunity to strike up a conversation with Carter Page, whom Trump had named a few months earlier as a foreign policy adviser.

But the professor was more than an academic interested in American politics — he was a longtime U.S. intelligence source. And, at some point in 2016, he began working as a secret informant for the FBI as it investigated Russia’s interference in the campaign, according to people familiar with his activities.

The same day, The New York Times published an article titled, “F.B.I. Used Informant to Investigate Russia Ties to Campaign, Not to Spy, as Trump Claims.”

On March 25, 2018, The Daily Caller published an article tying an American professor based in the UK to meetings with three members of the Trump campaign, paying one of them $3,000 plus travel expenses to write a paper on an unrelated topic.  At that time, The DC reported, “it is not clear if he has been in touch with investigators.”

Last Tuesday, Nunes appeared on Fox & Friends, stating that he and Chairman of the House Oversight & Government Reform Committee Trey Gowdy had a “productive” meeting with intelligence and DOJ officials the previous Wednesday and that he was looking forward to another such meeting the following day, May 16. However, on Tuesday evening, commentator Sean Hannity, who has been following developments closely, announced that the meeting had been canceled until “next week.”

On Sunday, Gateway Pundit reported that the DOJ said it offered to meet with Nunes and Gowdy last Friday morning but that they did not respond to the invitation.  However, Steve Doocy said on Monday’s Fox & Friends that in a Sunday interview with Fox Business’s Maria Bartiromo, Nunes said he learned that if he attended the proposed meeting, he would not receive the requested documents.

Nunes and other House Republicans have reportedly crafted Articles of Impeachment against Deputy Attorney General Rod Rosenstein for withholding the documentation congressional committees say they need to see to determine the extent to which any abuse of FISA laws was conducted by the U.S. intelligence community, also involving at least one member of the Trump campaign who was also approached by the UK-based professor.

Nunes had told Bartiromo  that “If they ran a spy ring or an informant ring and they were paying people within the Trump campaign…that is an absolute red line.” (4:00)

Last Monday, radio host Rush Limbaugh theorized that the “professor” who played the role of an “informant” between the Trump campaign and the FBI had done so using the technique of “entrapment.”  On Hannity’s show last Monday night, investigative reporter Sara A. Carter theorized that the “’intelligence source’ with ties to both the FBI and the CIA acted as a ‘mole’ to gain inside information on the 2016 Trump presidential campaign.”

Trump’s three-part response to Brennan consists of comments, although not exact, made on the FNC “Fox & Friends” show on Monday morning by commentator, radio host and former Secret Service agent Dan Bongino beginning at 24:04 here: https://www.youtube.com/watch?v=M0lNc_JBWJw

Trump’s slightly inexact quote of Bongino’s initial comments ends with “of this whole Debacle” in the third tweet but resumes after Bongino responded to the co-hosts’ questions.

After Doocy asked, referring to Brennan, “Who told him to do it?  Who told him to start it?” Bongino revealed that he and at least one other person are writing a book on the topic.  “We think, based on some of my investigation and for the book we’re putting together on this, that he just didn’t like Donald Trump,” he responded, “but got information through unofficial channels through people who were involved with British intelligence.   They were basically using unofficial channels, Steve, to launder information, like you would launder money.  Because if they put it through officials channels, something would have happened.  You now what that one thing is?  They would have had to verify the information before they used it, and they didn’t want to, because this was a political hit job.  This was not an intelligence investigation.”

Co-host Brian Kilmeade then asked who might have known of Brennan’s alleged actions, to which Bongino responded, “I believe John Carlin at DOJ; Jim Clapper; I believe Loretta Lynch had detailed knowledge; of course Comey knew what was going on in this.  There was a very small working group of people who were involved in this political hit job on Donald Trump.  But at this point — here’s the problem, Brian — the reason Brennan’s panicking and lot of others have gone silent is they’re not just worried about reputational harm.  Brennan’s disgraced himself; he knows history’s not going to be kind to him. They’re worried about staying out of jail.  There were criminal leaks here; criminal leaks, felonious, criminal leaks of information.  Someone was responsible.”

Bongino is a Fox News contributor, host of “The Dan Bongino Show,” a former NYPD officer and U.S. Secret Service agent, a three-time congressional candidate and published author. He also serves as an NRA spokesman.

Approximately an hour after the three tweets, Trump asked the question, “Where in the world was Barack Obama?” quoting the title of an article featured on the program in its interview of James Freeman, introduced by Kilmeade as “Assistant Editor for The Wall Street Journal editorial page.” (13:27)

Freeman is also a Fox News contributor.  His article was published Friday.

In his Monday morning interview with Kilmeade, Freeman speculated that “to begin spying on a U.S. political campaign” would have been “a presidential decision.”  He then suggested that Obama “weigh in at this point” as to what he knew and when.

“If this is not a presidential-level decision, I don’t know what is,” Freeman concluded his interview.