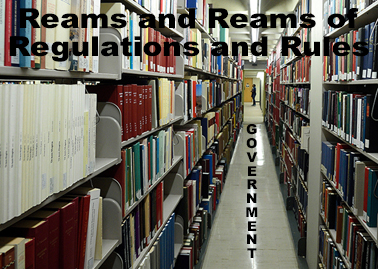 (May 20, 2018) — Let’s just say that you are somewhat trapped in a fairly large hole.  The sides, well over 50 feet high, are too steep to climb out but you have semi-freedom to move around and attend to your daily needs.  Your skill is widget-making and you are given the raw materials to make your widgets.  In return for the widgets, your captor throws food and water into the hole every day so you won’t starve or die of thirst.  However, as part of the fee for living and producing widgets, your captors reduce your food and water by just a little bit, each day, for taxes.  But then a strange thing starts to happen.  Each day, in addition to the food and water, your captor starts dumping a muddy slurry into the hole (regulations).   You slop around in the mud, but you are still free to move about, albeit messy.  Widget-making becomes more difficult and requires extra effort.  You grow weaker as your food and water are reduced.

But as the slurry gets deeper and deeper, your ability to move gets tougher each day.  You yell about injustice to your captors, but they aren’t listening and the slurry slowly rises.  Finally, you reach the point where you can’t move at all, even to make widgets or get to your food and water and you and your semi-freedom die.  You die a slow, agonizing death as freedom and sustenance are stripped from you, just a little bit at a time.

Consider now that the millions of local, state and federal laws are the slurry that is being dumped into your “hole.”  At first, you don’t feel the impact of the laws and you can still slosh around.  It’s a minor inconvenience and you ignore it.  The slurry (law) rises a little bit more and you complain and moan about increasing restrictions, but still you ignore the cause of the rising mud.  Your freedom of movement becomes more restricted each day as the slurry (flurry of laws) grows exponentially.  The laws are designed by special interests to inflict greater restrictions on the people to implement some narrow-focus agenda.  The laws are passed by immoral legislators who pander to the special interests so that they can buy votes and retain their political power.

Then of course, your captor (government) extracts taxes from you by reducing your daily food and water rations.   Now your condition is that you can’t move as freely as you once did and the sustenance that keeps you alive is being slowly reduced.  Your future is indeed bleak and you many not know it, but you are dying.

Every time we hear someone say, “They ought to pass a law,” we cringe in horror, because we know who “they” is: government.  That is what has gotten us to financial meltdown and the continuing loss of freedom and liberty.  The question we ask, was the direction we have taken for almost 100 years, intentional?  Are there cabals, conspirators, or racketeers actively engaging in the destruction of America and freedom for their own gain?  Are there individuals or groups that would pass laws (a muddy slurry) for the sole purpose of entrenching the power of those individuals or groups?  We can come to no other conclusion.

Congress passed the Community Reinvestment Act (CRA). ACORN, a liberal activist organization, used CRA to lean on banks by legal means (lawsuits) and public pressure to make loans to inner-city individuals who could not repay the loans.  Fannie Mae and Freddie Mac, out-of-control government-backed financial institutions, use CRA to increase their backing of these high-risk loans that are doomed to fail by saying they are guaranteed by the good faith and credit of the U.S. Government.  Fanny and Freddie bundle the bad loans into security instruments and pass them all over Wall Street.  Wall Street jumps into the act because the returns on the risky securities are higher than other investments. Wall Street then starts dumping these securities to foreign buyers who are also attracted by the high returns.  And the absolutely predictable results triggered the financial meltdown of 2008 and precipitated worldwide panic-selling and a whole host of other maladies that took us to the edges of financial oblivion. All this heartache and pain was the direct result of a bad law being passed (CRA) and protected by certain legislators and exploited by special interests and domestic terrorists (ACORN-OBAMA-AYERS-RANGEL-DODD-FRANK-COX, etc.) who do not have your constitutional guarantees or American freedom in their daily playbook.

As an example, the passage of the law to designate the Polar Bear as endangered was for the sole purpose of implementing man-caused global warming CO2 limits and cap-and-trade policies.  Environmentalists went to our corrupt courts to obtain the decisions necessary to make implementation of these limits and cap-and-trade policies a matter of law, which imposed untold costs on urban and rural folk alike.

Rule-makers (the EPA) got around Congress’s inaction to pass cap-and-trade policies.  National and international environmentalists lobbied both Congress and the Environmental Protection Agency (EPA) to declare carbon dioxide (CO2) and several other greenhouse gases dangerous pollutants, triggering massive and costly regulations.  They did so on December 7, 2009 based on climate change computer models that have been unable to predict even current conditions.  The fact is, however, CO2 is not a dangerous pollutant.  Without CO2 the earth, humans, animals, birds, plants, insects and micro-organisms die.  Fortunately, the new EPA Administrator, Scott Pruitt, under the Trump Administration is trying to repeal the EPA CO2 pollutant decision.

Then along came the educated idiots, using psychological mumbo-jumbo human “science to radically change American public schools and academia into institutions of government social and environmental propaganda and indoctrination.  At least three generations of American children have been subjected to purposeful brainwashing.  That means their parents and their parents’ parents have mostly been robbed of critical thinking and free choice.  They live in a government- and special-interest-manufactured bubble, created by control freaks who abhor unalienable rights.

On top of that, many of our liberal congressional legislators, with malice aforethought, have created a system, through laws and rules, that acts as a magnet for the poorest of the poor to invade our country, further dumbing-down the population and destroying American culture.

So we the people, the stupid ones, allowed the special interests and the government to operate unchecked and they did and are doing whatever they darn well please.  We, the stupid ones, are now paying the price for our apathy, disinterest and inattention.  We the stupid ones are in the hole and the slurry of mud is up around our waists and we can hardly move, even to fight back.  We the stupid ones are paying the price of the loss of our freedom because we stupidly trusted government and special interests to do the right thing and adhere to the principles of our constitution.   Predictably, they did not, because their goal was and is power, not liberty.

Unfortunately, the real victims of government regulation are those that grow our meat, grain, fruit and vegetables in “flyover” country.  Land use and environmental rules have made farming and ranching a laborious ordeal rather than the wholesome pursuit it used to be.  Farmers and ranchers have the highest rate of suicide than any other group, including returning veterans from war.  Why?  Because of rules and regulations that make their business more difficult to run or force them out of business entirely.  Thanks to the U.S. Supreme Court, landowners can lose up to 95% of the use of their property by regulation before government is forced to pay them “just compensation,” as required by the 5th Amendment.  For many of these reasons we formed the National Association of Rural Landowners 12 years ago to act as advocates for the rural landowner.  We provide PRODUCTS and SERVICES that can only be found on our WEBSITE.

But we the stupid ones pay no attention to the laws of physics, economics, or human nature.  Instead we listen to the educated idiots and the immoral politicians who beguile us with soft-sounding words, psychological phrases, hidden meanings, political correctness, multi-culturalism, mindless propaganda and the virtues of the one-world-order.

One of Newton’s laws of physics stated that “a body in motion will continue in the direction of motion until acted upon by an external force.”  That law applies to people and governments as well.  We the stupid ones were supposed to be that external force that acted on a government in motion, whose motion was taking us straight to hell.  Now with the slurry of laws up around our waists, our ability to act as an external force on government is indeed problematic.  We are literally choking on that slurry of laws.  Some of us are going to have to break free from that slurry, set government on the right course and rescue the others who are still mired in the mud.  It ain’t going to be easy.  The alternative is unthinkable.

America is, or was, the beacon of hope for the world.  Look around you!  She is dying right before your very eyes.  Are you going to be a part of that external force that changes the motion of a government hopelessly going in the wrong direction, a direction that spells slavery for its people?  Or are you going to watch her die without lifting a finger?

Just three percent (3%) of the population took up arms and gave birth to freedom in the Revolutionary War.  Today 3% is just under 10,000,000 Americans.  How difficult can that be?

“When do too many laws equal slavery?”  The question has been answered.  They already have.

How FREE do you feel?

Ron Ewart, a nationally known author and speaker on freedom and property rights issues and author of this weekly column, “In Defense of Rural America.”  Ron is the president of the National Association of Rural Landowners (NARLO) (www.narlo.org), a non-profit corporation headquartered in Washington State, acting as an advocate and consultant for urban and rural landowners.  Affiliated NARLO websites are “SAVE THE USA” (http://www.stusa.us/).   Ron can be reached for comment HERE.