AND IF “OBAMA ADMINISTRATION” PROMPTED IT 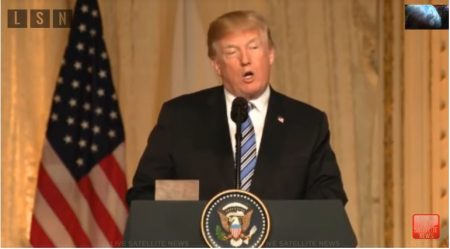 (May 20, 2018) — Following a seven-tweet series on Sunday morning in which President Donald J. Trump expressed his growing frustration with the Special Counsel “Russia” probe, he tweeted on Sunday afternoon that on Monday he will “demand” that the U.S. Justice Department (DOJ) open an investigation into allegations that the FBI, DOJ or both positioned an informant in his 2016 presidential campaign.

The Wall Street Journal, The Washington Post and The New York Times over the last 12 days have reported that not only was an “informant” used by the FBI to glean information from two or three Trump campaign aides, but also that they likely knew the identity of informant.

On May 8, The Post reported that a “top-secret intelligence source” had gathered “information” which was “provided to the Mueller investigation” but that identifying the source to members of Congress could “risk lives.”  However, at the same time, The Post released identifying information on the alleged source.

Some, including radio show host Rush Limbaugh, have theorized that a professor teaching at a British university contacted then-Trump advisors George Papadopoulos and Carter Page to glean or plant information during the 2016 presidential campaign season for reasons of “entrapment.”

On Saturday, The Daily Caller reported that campaign aide Sam Clovis was also contacted by the professor.

In a report issued on Friday The New York Times attempted to portray the use by the FBI of an informant external to or within the Trump campaign as effected for Trump’s benefit.  Other outlets appeared to question the “sourcing” of Trump’s claims that an informant was, in fact, interacting with his campaign despite The Times’s and Post’s articles.

On Friday The Washington Post began an article with, “President Trump’s allies are waging an increasingly aggressive campaign to undercut the Russia investigation by exposing the role of a top-secret FBI source. The effort reached new heights Thursday as Trump alleged that an informant had improperly spied on his 2016 campaign and predicted that the ensuing scandal would be ‘bigger than Watergate!’”

In his newest tweet, Trump added that he wants to know “if any such demands or requests were made by people within the Obama Administration!”

An avid user of the social media platform, Trump often uses Twitter to reach the American people directly, perhaps given that he has denounced most of the major media as purveyors of “fake news” and accused them of treating him “unfairly.”

On Saturday evening, Trump had tweeted that “If the FBI or DOJ was infiltrating a campaign for the benefit of another campaign, that is a really big deal. Only the release or review of documents that the House Intelligence Committee (also, Senate Judiciary) is asking for can give the conclusive answers. Drain the Swamp!”