(May 17, 2018) — In an essay scheduled to be published in the Duke Journal of Constitutional Law & Public Policy on Friday, University of Richmond School of Law Professor Kevin C. Walsh is introducing a “Proposed Amendment to the U.S. Constitution” to the “natural born Citizen” clause pertaining to presidential eligibility.

The requirements are contained in Article II, Section 1, clause 5 of the Constitution, which reads:

Walsh’s essay, which can be downloaded by those registered with Reason.com, as of this writing counts 69 downloads and 772 unique views. 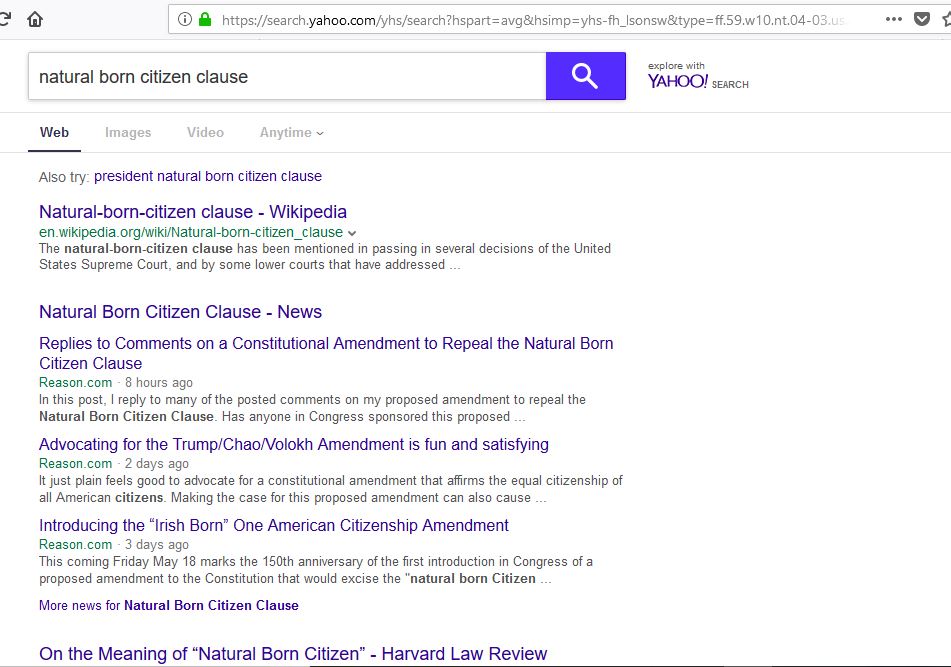 As of this writing, there appear to be no congressional sponsors of proposed legislation pertaining to the “natural born Citizen” clause.

In his essay, Walsh argues that the “birth-based requirement that excludes naturalized American citizens from presidential eligibility” should be rescinded.  At present, naturalized citizens are not considered eligible to serve as the nation’s chief executive.

The issue of presidential eligibility came to the fore in 2007 when credible reports surfaced stating that Barack Hussein Obama was born in Indonesia or Kenya. Likewise, the Republican contender he eventually faced in the 2008 election, Sen. Jon McCain, was born in Panama; his constitutional eligibility had been questioned in 2000 when he entered the Republican presidential primary but ultimately lost to George W. Bush.

Also in 2007, Georgetown University School of Law Professor Lawrence B. Solum published a paper in the Michigan Law Review discussing, in part, whether or not McCain met the eligibility requirements in which he wrote of the “natural born Citizen” term, “There is general agreement on the core of its meaning. Anyone born on American soil whose parents are citizens of the United States is a ‘natural born citizen.'”

He goes on to argue that McCain’s citizenship status was “conferred by statute in 1937.”  “”There is dispute as to whether the statute granted retroactive naturalization or whether it merely confirms pre-existing law under which McCain was an American citizen at birth. That leaves Jon McCain in a twilight zone– neither clearly naturalized nor natural born,” Solum continued on pages 2-3.

In 2015, the issue resurfaced after Canadian-born U.S. Sen. Ted Cruz entered the presidential race. Days before Cruz declared his candidacy, two former solicitors general, one who served in a Democrat administration and the other in a Republican administration, published an essay in the Harvard Law Review reasoning that although foreign-born, Cruz was eligible to the presidency because he was born to one U.S.-citizen parent.

After the primary season launched, NPR’s Scott Simon wrote a column published at CBS News titled, “Do away with ‘natural born citizen’ clause” based on its exclusion of “talented” naturalized citizens.  Six days later, the lead investigator for the five-year Obama “long-form” birth certificate probe which concluded that the image posted at whitehouse.gov is a “computer-generated forgery” opined to radio host Carl Gallups that the Framers had intended to “encapsulate the office of the presidency to be held by only an individual who was protected through the allegiance of having been born on the soil and had allegiance by blood, citizen parents” (6:50 in video).

Walsh’s essay abstract, on the other hand, makes a distinct difference between an individual born in a foreign country who legally immigrated to the United States and became a citizen and one born in the country.  Walsh claims that an amendment abolishing the “natural born” requirement is “obvious and overdue” because “There are not two classes of American citizenship, just one.”

Since 2003, at least eight attempts have been introduced by various members of Congress to amend the “natural born Citizen” requirement.  The timing of the publication of Walsh’s essay coincides with a much earlier attempt to rescind the “natural born” requirement by Rep. William Erigena Robinson, who served in Congress representing a New York City district for three terms, although not consecutively.  Robinson was born in County Tyrone, Ireland.

Walsh has nicknamed his proposed amendment “Irish-born” after Robinson.  If recorded, Robinson’s proposed constitutional amendment would be in the Congressional Globe for the 40th Congress.

In his follow-up post, Walsh condensed some of the comments he received in response to his essay and provided some of his own.  Prospective commenters must register and log in prior to posting.

Essay Proposing Constitutional Amendment to “natural born Citizen” Clause to be Published on Friday added on Thursday, May 17, 2018