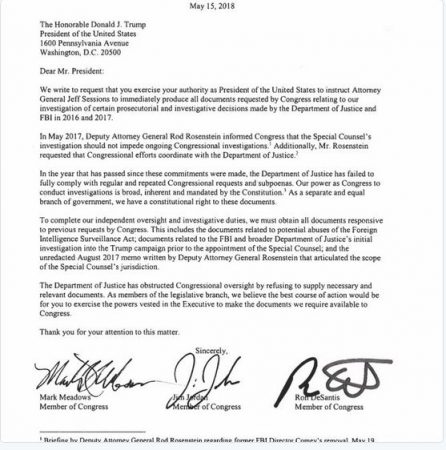 (May 16, 2018) — On Wednesday afternoon, three congressmen tweeted the image of a letter sent to President Trump on Tuesday asking him to “instruct Attorney General Jeff Sessions to immediately produce all documents requested by Congress relating to our investigation of certain prosecutorial and investigative decisions made by the Department of Justice and FBI in 2016 and 2017.”

A number of congressional committees have been independently investigating the extent to which Russian influence impacted the 2016 election and any politically-motivated actions on the part of FBI and DOJ in regard to the election.

In mid-March, Republicans on the House Permanent Subcommittee on Intelligence (HPSCI) closed their investigation into whether or not anyone in the Trump campaign “colluded” with the Kremlin to assure Trump’s win against Democratic presidential contender Hillary Rodham Clinton, an issue Mueller continues to probe.

Democrats on the Intelligence subcommittee criticized the decision made by Chairman Devin Nunes and pledged to continue investigating the collusion allegations on their own.

On May 9, Nunes and House Oversight and Government Reform Committee Chairman Trey Gowdy met with DOJ and FBI officials over a stalemate regarding document production relating to the launching of an FBI counterintelligence operation against the Trump campaign in late July 2016.  On Tuesday morning’s edition of “Fox & Friends,” Nunes told the three co-hosts that he expected a meeting scheduled for today to be equally “productive” as last week’s.

On his Tuesday evening show, however, commentator Sean Hannity announced that the meeting among Nunes, Gowdy and the law-enforcement officials was postponed until “next week” without specifying a day.

Congress has been probing possible abuse of the Foreign Intelligence Surveillance Act (FISA) by members of the DOJ and intelligence community which resulted in four warrants granted by the Foreign Intelligence Surveillance Court (FISC) to collect the communications of Trump campaign informal foreign-policy adviser Carter Page.  A Senate Judiciary Committee letter from early January contends that the origin of the Trump/Russia “dossier,” a politically-funded opposition research project on Trump funded by the Clinton campaign and DNC used as evidence for the warrants, was not revealed to the court.

The ten-page Senate Judiciary letter refers dossier author and former FBI informant Christopher Steele, a British citizen, to the Justice Department for criminal investigation given that his conflicting statements indicate that he might have lied to the FBI about his contacts with the media about the dossier.

Another investigation into alleged political actions by the FBI and DOJ has been ongoing by the Justice Department’s inspector general since January 12, 2017, with an initial report issued in March recommending that then-FBI Deputy Director Andrew McCabe be terminated from his position from which he had hoped to collect a lifetime pension.

On March 16, Sessions took the IG’s recommendation and fired McCabe.

The IG is expected to release a second report by the end of May or early June predicted by some to contain explosive information as to wrongdoing committed on the part of high-ranking government officials.

From the outset, Trump has called the Mueller investigation a “witch hunt” but has denied having any intention of firing Mueller, who was brought in by Rosenstein.

Rosenstein, Mueller and fired FBI Director James Comey have been colleagues within the Justice Department for a number of years, although not always working closely with one another.

Mueller’s oversight of the “Russia” probe, one year old on Wednesday, has taken place while questions about his own objectivity and that of his prosecutorial team, many of whom have donated to Democrats over the years and some to Clinton’s 2016 campaign, continue to arise.

Tuesday’s congressional letter to Trump concludes with, “The Department of Justice has obstructed Congressional oversight by refusing to supply necessary and relevant documents.  As members of the legislative branch, we believe the best course of action would be for you to exercise the powers vested in the Executive to make the documents we require available to Congress.”

Each signatory of the letter offered his own comments on Twitter: