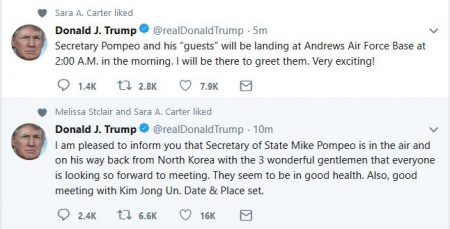 (May 9, 2018) — At approximately 8:35 AM on Wednesday, President Donald J. Trump tweeted that he plans to meet Secretary of State Mike Pompeo on his return from a visit to North Korea when his plane lands at 2:00 a.m. on Thursday at Andrews Air Force Base.

Pompeo, who was just confirmed as Secretary of State on April 26, is now completing his second trip to the rogue nation in six weeks, having met, initially clandestinely, with North Korean dictator Kim Jong-Un over the Easter weekend in an attempt to thaw relations to quell North Korea’s rising nuclear threat.

Trump said that Pompeo would have along with him “3 wonderful gentlemen” who he termed “guests” in a tweet five minutes later in a virtually unmistakable reference to three American citizens held by the North Korean regime on various charges.

Two of the men were teaching at Pyongyang University, while the third was a businessman.

As was reported by Reuters on Tuesday, a South Korean source had reported that one of Pompeo’s goals in his Wednesday meeting with North Korean officials was to obtain the release of the three American citizens.

Last week, reports surfaced which stated that the three men had been released early last month from the prison camp at which they were held and were currently at a “hotel” undergoing “education.”

Communist regimes, and in particular, the North Korean government, are adept at publishing propaganda such that the outside world cannot know the truth without reliable “inside” sources.

In a press release issued Tuesday night as Pompeo traveled from Japan to North Korea, he was asked about the three hostages and indicated that their release would be a sign of goodwill on the part of the North Korean regime prior to the anticipated face-to-face meeting between Trump and Kim Jong-Un.  Pompeo did not confirm, as news reports had suggested, that he would accompany the three hostages back to United States.

Of the now-former hostages’ condition, Trump tweeted, “They seem to be in good health.”  If true, It would be in stark contrast to the condition of former hostage Otto Warmbier, whose release from North Korea the Trump administration was able to secure last June after Warmbier spent 17 months in captivity. He returned to his home state of Ohio reportedly comatose and passed away six days later in the hospital at the age of 22.

Of Pompeo and the US citizens’ expected arrival, Trump punctuated his second tweet on the subject with, “Very exciting!”

Nearly 45 minutes after Trump issued his tweets, the topic is not trending on Twitter. 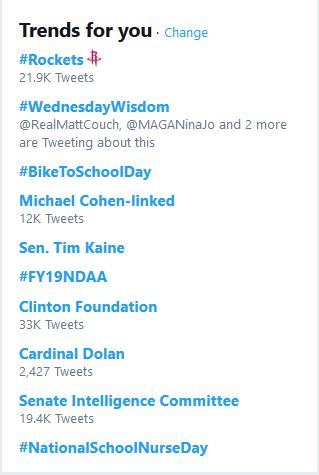 Trump has repeatedly accused the mainstream media of producing overwhelmingly negative coverage of his administration and earlier on cited a Media Research Center report which said that between January and April 2018, 91% of the legacy media’s coverage of the Trump administration was negative.

Approximately 50 minutes after Trump’s tweets, “Secretary of State Pompeo” is trending second from the bottom on Twitter. 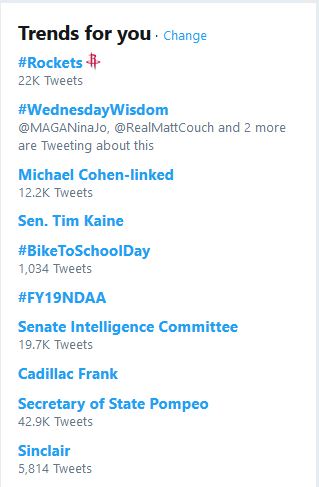 Some of the tweets do not relate to Pompeo’s current return trip from North Korea.

Update, 9:44 a.m. EDT:  Pompeo tweeted that he “made progress” while in North Korea:

Trump: Secretary of State to Accompany American Hostages Home from North Korea added on Wednesday, May 9, 2018