“THE EFFECTS ARE FAR-REACHING” 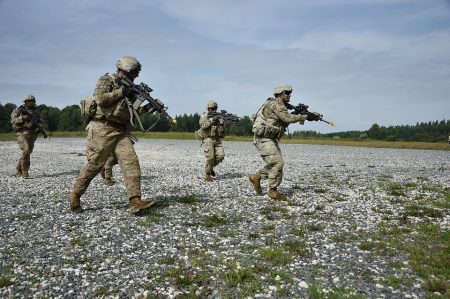 (May 3, 2018) — “Good evening, ladies and gentlemen, and welcome to the meeting of the overly nervous among us. Hello, my name is Roving Reporter and I’ll be your host for this evening’s festivities. We have a lot of interesting guest speakers so let’s get started, shall we? Our first guest speaker is Dave from the U.S. Army. Hello, Dave, how goes it?”

“I’m sorry, I thought I could handle this, but I don’t think I can. That sounded like a trick question; I mean, if I say, ‘I’m doing fine; thank you for asking,’ maybe you’ll think I’m not doing so fine and maybe I’m not thinking of thanking you.  On the other hand, if I say, ‘Gee, I don’t think I’m doing so good,’ maybe you’ll think I’m not doing so good. See what I mean? Maybe I need some help but, then again, maybe not or I don’t want your help. Maybe I want help from someone else. I don’t know; let me get back to you on that.”

“Sure, Dave. No hurry; there’s no hurry here. Does anybody have a hurry?”

“A gentleman from the audience wants to know if we’re in a hurry. Let’s get this commercial out of the way, then I’ll answer.”

“Okay. Let me explain it in terms all of us can relate to. You join up, then what? You wait in line. If there was a civilian job that required the expertise of waiting in line the Army would win hands-down, followed by the Marines, then the Navy, although the Navy has had its moments.

“No, there’s no hurry, which is what our next guest capitalized on bigly and made a bundle. Allow me to introduce to you Jim of ‘See Jim with No Money Down!’ fame. Hello, Jim, so how do you explain your tremendous financial success?”

“I’m glad you narrowed it down to financial success and not any other success, of which I have none. Been divorced which really hurts.”

“That is true but my current wife — well, I’m not going to air my disappointments in public.”

“So tell us about your business. What was the key to getting it off the ground?”

“It was really pretty simple, once I understood how messed-up those guys were getting back from a war zone. You see, once a guy has been in combat and seen and done things that are what in polite society would be considered over-the-edge, well, all I did was advertise: ‘If you can’t make the payments, who cares? You’ll probably not be around anyway.’ And the rest, as they say, is history.”

“I’ll say. It says here that you put every used car dealer out of business from National City to El Cajon to Oceanside within the first couple of months. How did that make you feel?”

“And there he goes: ‘Dandy Jim of no-money- down fame.’ Do we break for commercials? We do? Okay, if you’ll excuse us, please, we’ll be right back.”

“We’re back, and with me here is our very own Professor Zorkophsky, author of many best-sellers dealing with the most nervous among us. Hello, Professor, and what have you got to say to us from the auditorium of the university?”

“Please, Roving, call me ‘Zork’; no need to be so formal among friends. Oh, yes, the reason why I’m here is to explain a symptom of PTSD: the inability to communicate, even to the point of not talking about their most important feelings. Actually, I just wrote a book about that very subject where I interviewed 100 divorced spouses of PTSD Veterans who just packed it up and left. The one underlying comment from all of the women was, ‘He never talked about what was bugging him.’”

“Are you going to tell us the name of your latest best-seller?”

“For sure: ‘You Don’t Understand,’ the furthest a PTSD-afflicted person has been known to ‘open up.’”

“No, and that’s the sad part because if they had – if they were able – been able to communicate, a lot of divorced women and fatherless children wouldn’t have been divorced or fatherless. The effects are far-reaching and generational.

“For instance, those Vietnam Veterans who displayed the classic symptoms of PTSD didn’t seek or receive help until some 40 years after the fact.”

“Unfortunately, for many of them it was too late. Some became halfway normal — well, most of them became halfway normal, but it was a rough road for each and every one of them. As I said, the most obvious casualty was the higher-than-normal divorce rates and the dropout rate from colleges, trade schools and jobs. And society, America as a whole, has been paying the price for the incompetence of the politicians in the White House and the generals in the Pentagon.”

“Seems as if nothing’s changed.”

“Now ain’t that the truth?”

“Are there degrees of PTSD? I mean, do different wars result in different symptoms? Am I even asking the question correctly?”

“Yes, Roving, you asked that question correctly. And the answer is that when you talk about a ‘Band of Brothers,’ you couldn’t get any closer than that, those who have suffered because of their humanity. It’s the ones who have shown no emotion, even from the ‘inception incident’* until even now, many years later, that are the real scary ones, at least in my book, which, by the way, I just wrote about and will be on shelves very soon.”

“’Delayed PTSD or Never,’ a riveting tale of the absence of empathy, by Professor Zorkophsky, eminent scholar on the nuts among us.”

“It’s sure to be a required text so I’m sure to make a lot of money.”

“So these PTSD people, what happens to them when they get up and go away?”

“The clinical term is ‘Brain Boundary Relocation,’ commonly referred to as ‘BBR.’ What the brain is making these people do is to change the stimulus that triggers certain behavior patterns.”

“Okay, I’ll give you an example. Let’s say a Vet is hooked on the pills the VA prescribed for him and he wants to stop; to get off of them; to become clean; so he decides that the best course of action – for him – is to get away from it all. He decides to pack it up and move to the woods, or maybe to some far-away place where the chance of his continuing his path to destruction can’t continue. So that’s what he does and then, in a couple of years, he’s completely clean: born again into the land where long-range plans are a reality and not an absurdity. 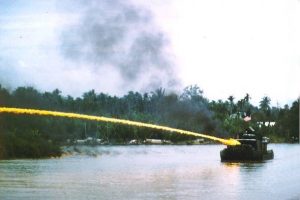 “I’ll give you another example: Vet wants to stop the drugs from cigarettes, marijuana and the beer, but he can’t do it in the place where he’s at, at least in his mind (that he can’t control because of PTSD, right?), so he packs it up and leaves. Meanwhile, the Vet stops the drugs, as in for good and forever; goes back to college and graduates with honors and the wife divorces him. Go figure.”

“So what happened? Did the Vet resort to his former behavior, go back to the booze and the drugs?”

“No, matter-of-fact, he started his own business and became very successful, without one cigarette or one bottle of beer. Great story of redemption, except for his wife running out on him.”

“But he ran out on her first, right?”

“Okay, Professor, nice to have talked with you on this most momentous occasion. And to those in the auditorium and you viewers at home, you’ve been a great audience but I’m afraid we’ve just run out of time and so, on behalf of the crew, allow me to wish each and every one of you a goodnight: Goodnight.

[*’Inception incident’: memories that can be triggered by the most innocuous things imaginable; for instance, the roll of thunder reminding one of bombs or artillery, or napalm.]

Welcome to the PTSD National Convention (RR) added on Thursday, May 3, 2018