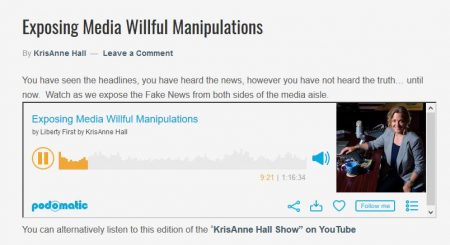 (May 3, 2018) — In a newsletter published on May 2, 2018, constitutional educator, attorney, author and radio show host KrisAnne Hall included a link to a recent podcast in which she provided examples of how news headlines can be misleading and “less than accurate.”

Her first example was an article by NBC News bearing the headline, “Senate Judiciary Committee passes bill to protect Mueller.”  The subheading is “The legislation to shield the special counsel comes as President Trump continues to criticize Russia investigation.”

Directly below the two headings, NBC reported, “The Senate Judiciary Committee voted Thursday to advance legislation designed to make it more difficult for any president to dismiss a special counsel, a signal to President Donald Trump amid Robert Mueller’s ongoing Russia probe.”

“There are so many problems with this,” Hall commented.  “The Senate Judiciary does not pass legislation.”

Hall later quoted from a Washington Post article on the development which she pointed out reports “a little bit more of the truth.” The Post explained that although the measure passed the Senate Judiciary Committee, it must be brought to the floor of the entire Senate by current Majority Leader Mitch McConnell and then passed by majority vote in order to then make its way to the U.S. House of Representatives.  Constitutionally, Hall explained, the proposal would have to pass both the Senate and House to make its way to the president’s desk for his signature.

“There is little hope that the Senate legislation will become law,” The Post included in its article.

Noting that the bill appears to be aimed specifically at limiting Trump’s ability to terminate Special Counsel Robert Mueller, Hall asked rhetorically, “In our minds, is the president of the United States going to sign a piece of legislation that limits his authority to control his executive agency?”

“Seriously, why would this not be presented as a factual representation of the situation at hand rather than a headline that reads, ‘The Senate Judiciary Committee passes bill to protect Mueller’?” she asked her audience.

Hallsaid that she believes that the media is “taking advantage” of many people’s short attention spans and frequent habit of reading headlines which may be “intentionally” misleading.  “I think we need to be more critical about this,” she remarked.

After Hall’s husband, JC Hall, joined her, Hall said that she believes the media engages in a “presentation of fact” which is, at times, “false.”  JC called the practice “fake news.”

“This is not an isolated incident; they’re liars,” JC said.

Constitutional Educator Urges Americans to Read Past What Could Be Misleading Headlines added on Thursday, May 3, 2018