“YOU ARE A DISGRACE” 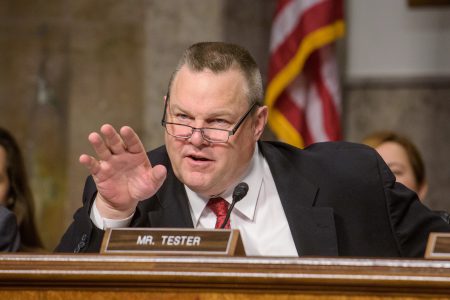 (May 1, 2018) — [Editor’s Note: the following two pages were faxed to the office of Montana Sen. Jon Tester by the author, a 93-year-old World War II veteran and retired Army dentist.]

I write to you as a proud and honorable former citizen of the Great State of Montana, I was raised in the small town of Cut Bank and graduated from CBHS in 1942 at age 17. I was raised as an honest, trustworthy man by my hard working, God-worshiping parents to be a patriotic and loyal American citizen. We were transplants from the drought-plagued state of Oklahoma and the Great Depression which cost us our small share-cropper farm causing the six of us to become Okies. Because of our Christian character and work ethic, we were welcomed to Montana and regular employment in the burgeoning Oil Fields of Glacier County

I was a long-time Boy Scout and adhered to their law which has these 12 points:  A Scout is trustworthy, loyal, helpful, friendly, courteous, kind, obedient, cheerful, thrifty, brave, clean, and reverent. My character was formed in those early years and has remained unchanged to this day.

Following graduation from High School, I worked for two months on Roy Brown’s Great Northern Section Gang laying and leveling track for Fifty Cents an hour for five 10-hour days a week.  I then served a short tour in the Merchant Marine aboard a United States Army Transport ship, out of Seattle into the dangerous waters of the North Pacific in July-August 1942.

When January 20th rolled around, I turned 18 and could hardly wait to get down to the Glacier County Courthouse and register for the Draft and ask Shirley Callison to please put me on the next group to go to Butte for my physical. I had been wearing glasses since high school and in Butte following a testy discussion with the Army examiners, I was accepted as a “Limited Service” Rear-rank Private. Though you have no military service, you might appreciate the fact that this skinny kid from Cut Bank entered the military and proved immediately that he would be a good soldier. I served for 42 Years, retiring in the grade of Colonel O-6.

Your false characterization of Rear Admiral Ronny Jackson did huge disservice to him and for the VA and in doing so, brought dishonor to Montana.
http://thefederalist.com/2018/04/28/sen-tester-owes-apology-to-rear-admiral-ronny-jackson/

I have had the distinct pleasure of meeting two exceptional Senators and one Governor from Montana; “Iron Mike” Mansfield, Burton K. Wheeler and J. Hugo Aronson. As a 21st century Democratic Politician, you have displayed the true disgraceful character of most of the Democrats we have suffered in my 93 years. Truman was the ONLY honorable Democrat, ever!

RESIGN TESTER; YOU ARE A DISGRACE TO MONTANA AND TO THE SENATE WHICH HAS TOO MANY LIKE YOU! Democrats have virtually destroyed this God-inspired Republic!

Dr. Thomas E. Davis is a World War II veteran of the China/Burma/India theater.  He later served in the military police and attended dental school, working as a dentist until his retirement on January 20, 1985 at the age of 60 as a full-bird colonel.  He is author of four books available here or at his website.  Originally from Cut Bank, MT, he now lives in New Jersey with his wife, Connie.