CENTRAL-AMERICAN “CARAVAN” SAID TO BE “BROKEN UP” 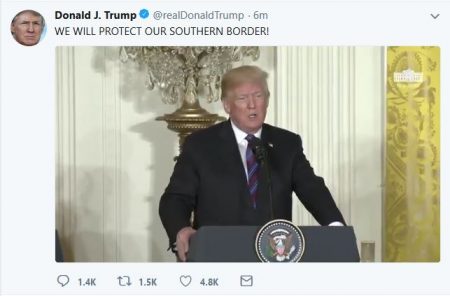 (Apr. 3, 2018) — In the wake of a “caravan” of mostly Honduran citizens traveling north to the U.S. with a number of “demands,” on Tuesday afternoon President Donald Trump said that he plans to have the U.S. military guard the U.S.-Mexico border.

Trump tweeted a link to his public remarks on the subject at approximately 4:00 p.m., which included the declaration that he would be meeting with Defense Secretary James Mattis and others shortly thereafter.

As he did on Twitter on Sunday, Trump appeared to tie the issue of the North American Free Trade Agreement (NAFTA) to Mexico’s playing a role in preventing the “caravan” from proceeding unfettered through its territory to the United States border.  On both Sunday and Tuesday, Trump deplored U.S. immigration laws, terming them “horrible.”

He also suggested that the group of between 1,000-1,500 individuals who reportedly plan to enter the United States by any means was in the process of being disbanded as of “12 minutes ago.”

Trump continued to express hope that Congress would amend immigration law in the near future to revoke the “catch and release” policy which allows undocumented aliens who enter the country claiming fear of persecution in their home countries to speak with an immigration officer and remain in the U.S. until their assigned court date, for which many do not appear.

His solo remarks followed a summit with leaders of the Baltic states of Latvia, Estomia and Lithuania.