“WE’VE FOUGHT EVERY STEP OF THE WAY” 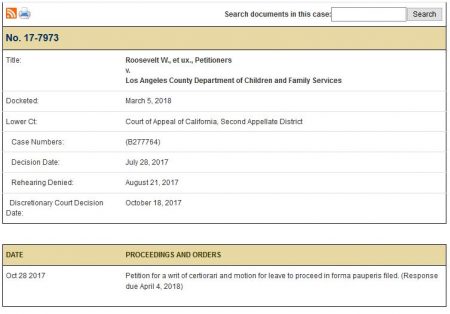 (Mar. 19, 2018) —  On March 5, a petition for a writ of certiorari regarding a case decided in California’s Court of Appeal, Second Appellate District involving the Los Angeles Department of Children & Family Services (DCFS) was docketed at the U.S. Supreme Court.

The pitch, Roosevelt Williams, Jr. and Kanika Williams, maintain that their two oldest children should not have been placed for adoption by DCFS when as the children’s biological parents, they are fit, willing and able to raise and care for them.

Dating back to their first encounter with Los Angeles DCFS, the Williamses have challenged the agency’s jurisdiction over their children given that their legal residence is in Alabama.

According to the Williamses and documentation they have provided, their oldest child, a son, was sent voluntarily to live with his maternal grandparents in California on what Roosevelt intended to be a temporary basis while Kanika recovered from a severe reaction to medication and hospitalization.

The documents show that during that time, Kanika’s mother, Katie Grant, contacted the Los Angeles DCFS with concerns that her daughter and son-in-law might not be able to properly care for their son, who was an only child at the time. The DCFS social worker’s response had been that while in the department’s view, risk factors might be present, DCFS could not detain the child without any evidence of abuse or neglect.

In an unusual move according to DCFS spokesman Armand Montiel, the Department identified the Williamses’ son as a possible adoptee just six weeks into the opening of the case.

Through a myriad of court hearings, case reassignments and escalation of tensions between the parents, the agency and Juvenile Court Judge Marguerite Downing, the Williamses have been compelled to travel between Alabama and California in an attempt to regain custody of their son.  Later, two daughters born to them were also taken away and placed with Kanika’s parents, Willie and Katie Grant.

Mr. Grant is an attorney and reportedly attended law school with Downing, a point which the Williamses believed should have disqualified Downing from presiding over any of the children’s cases.

All three children are on a trajectory for adoption by the Grants, although the case filed at the high court concerns the elder two given the separate timeline of the third child.  According to Kanika Williams, she and Roosevelt have not seen the children in nearly three years and are unable to speak with them by telephone.

“Adoption was always the plan,” both parents have said on a number of occasions, regardless of their completion of parenting classes and personal counseling recommended by the Department.

Although all of the courts thus far have ruled against them, the Williamses have said that they will never stop fighting for their constitutional and civil rights to raise their children free of unwarranted government interference.  “I’m proud of us no matter what is decided, we’ve fought every step of the way against this perverted unjust system. I pray for our family and others since it such senseless acts done and such a grave abuse of power,” Kanika Williams told us last week when notifying us of the docketing of the case. 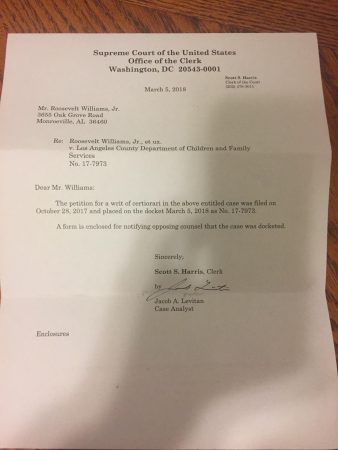 The docketing of a case does not guarantee that oral argument will be granted.

The Post & Email has reported on two other cases arising from Los Angeles DCFS action in which similar claims were made against agency social workers and juvenile court judges and commissioners.

After receiving the letter notifying them of the docketing of their appeal, the Williamses dispatched a 72-page brief in which they presented seven questions for the court to consider: 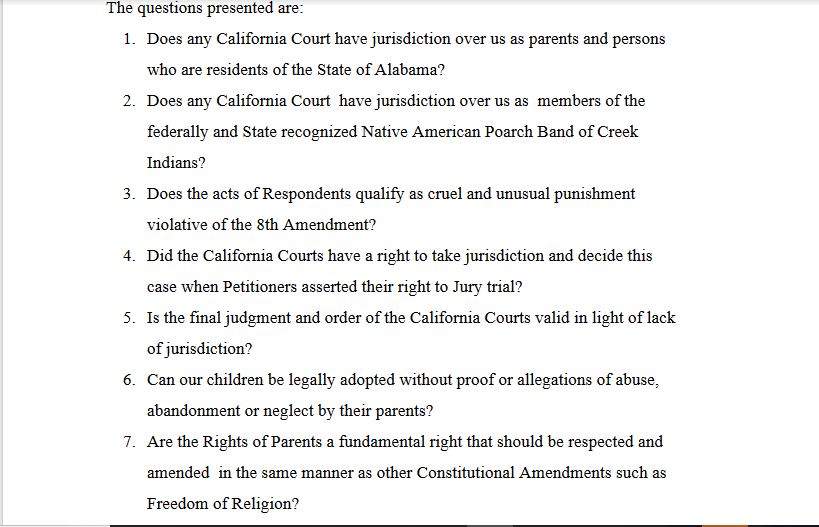