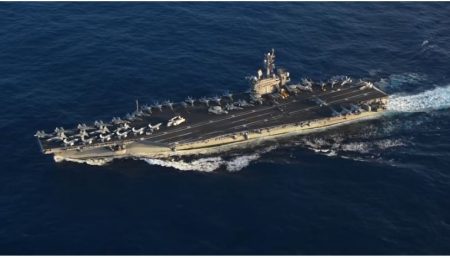 “We’re going to float all day and into the night.”

“Who made you the ship’s philosopher? I must’ve missed that one; I’ll have to complain to BUPERS; make a formal request that I be kept up-to-date on any personal changes to my home.”

“See, that’s what bugs me about you: you think this is your ship, don’t you?”

“You bet I do; that’s why I’m keeping her afloat.”

“Well, I must say you do your duties pretty good, so you get to be the Helmsman during the next rep.”

“So you’re letting a Seaman steer one of the Navy’s finest fighting ships during the most – arguably — dangerous situations? Why, I just learned that I’m starboard-handed*.”

“You’re out of your gourd, and so is the Navy; like it’s not dangerous enough doing an at-sea replenishment in the daytime. I hope no one gets highlined on over.”

“Hey: ‘fraid so; two, I think. And before you ask, Johnson has a broken arm and Nichols is down with Montezuma’s Revenge, the fool: I warned him about eating salads in our last port.”

“You’re nuts, you know that? I’m a lousy Boot**, and the fact that you know it makes it just that much worse.”

“Look, I hate to say it, but you’re the only one with brains in the whole division. It’s been decided: you’re it: get used to the idea. You’ve the rest of the day off; hit your rack. Report to the bridge for the Midwatch.”

[The point is that our military is stretched pretty thin these days, so people doing extra duty is to be expected.

Another point could be an argument for the Draft, where our military is made up of a real cross-section of America in terms of experience, education and aptitude and every other little thing you can name.

Actually, I was highlined once, and I must say that it was the most exhilarating amusement ride you could ever devise. Matter of fact, because it’s such a unique happening in a sailor’s life, they even issue a certificate of the event.

From a helmsman to a missile technician to testing the firing mechanisms of nuclear warheads was quite an adventure, even without the fireworks.

And, yes, I can write about PTSD because, among other things, I had a knife at my throat and I’m alive to write about it.

I never told my ex about some of the not-so-good times in the military; the shrink says one should, you know; not to keep it in.

But you know what? There are times when I wake up in the dead of night and feel that blade on my throat: for real.]