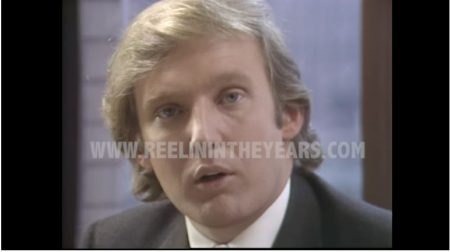 (Feb. 19, 2018) — The website ReelinintheYears.com has posted a video of a 34-year-old Donald Trump in a 1980 interview with actress and businesswoman Rona Barrett on the topics of politics, the presidency, America’s world standing, and the hostages then held by the Iranian regime.

Trump opined that the U.S. was “using very, very little of its potential” and that “with the proper leadership,” “respect” from the rest of the world could be restored.

During the 4+-minute interview segment, Barrett asked the young businessman whether or not he would ever enter politics or seek the presidency, to which he responded, “I really don’t believe I would, Rona, but I would like to see somebody as the president who could do the job, and there are very capable people in this country.”

When asked why he would not enter politics, Trump replied, “Because I think it’s a very mean life.  I would love and I would dedicate my life to this country, but I see it as being a mean life.”

“But if all the men are like you, then when are we gonna get somebody who might be good?” Barrett asked, to which Trump replied, “I don’t know; I hope it’s around the corner.”

Barrett and Trump agreed that “television” had negatively impacted the U.S. electoral process by focusing on a candidate’s photogenic qualities rather than his message and leadership abilities.  He said he envisioned himself participating in the process at some point to choose a suitable presidential candidate.

“One man could turn this country around,” he told Barrett emphatically.

After Barrett asked him what he would do if he “lost his fortune,” Trump responded, “Maybe I’d run for president; I don’t know,” with a small laugh.