THEN SEIZED FROM PARENTS’ CUSTODY 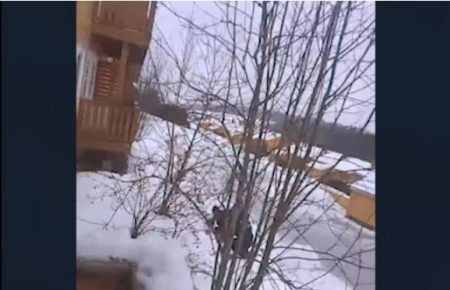 (Feb. 15, 2018) — The Homeschool Legal Defense Association (HSLDA) has reported that a 12-year-old Canadian boy living with his parents in Norway was forcibly taken from their home after they began homeschooling him last month.

A video of child-welfare agents from the Barnevernet chasing Kai Kristiansen across the road and tackling him in the snow is on the HSLDA website and YouTube.

Kai was seized and removed from his home on February 9, according to the Christian News Network.

Kai’s mother told CTV News (Canada) that her son had been the recipient of death threats from other children at his former school, causing concern and their decision to home-school, at least temporarily.  The article additionally states, “Kristiansen says she hasn’t seen her son since and has only spoken to him by phone once, on the night he was taken. She says she’s not even clear on where he is, only that it’s a building 60 kilometres away.”

According to the HSLDA’s interview with Kai’s parents, a court hearing will take place on Thursday.

A BBC article dated April 14, 2016 details how a couple’s five children were taken by the Barnevernet because they occasionally spanked their children, which is against the law in Norway.  The father is Romanian, while his wife is Norwegian.  “The case of a young couple in Norway whose five children were taken away by the state has fuelled mounting concern within the country and abroad over its child protection practices. Protesters around the world – and leading Norwegian professionals – say social workers are often too quick to separate children from their families, with too little justification, particularly when parents are immigrants,” the BBC began the story.

The outlet additionally reported that child abuse and/or neglect do not fuel most child removals in Norway.  “Most cases now don’t involve parental violence, though, or alcohol- or drug-abuse. The commonest reason for a care order now is simply ‘lack of parenting skills,'” the article states, which can include “lack of eye contact” from parents to child.

In an article dated February 15, 2018, the day of Kai’s scheduled hearing, it is reported that “Eight Norwegian child welfare cases have been heard by the European Court of Human Rights (ECHR) in Strasbourg over the past 15 months in what a long-time human rights lawyer has called ‘an extremely serious warning to Norway.’”  The report referenced “the removal of five children from their Norwegian/Romanian parents.”

In May 2015, a Norwegian newspaper published in English reported that the Barnevernet “has faced intense international criticism for taking children into care without a legally transparent process, and for refusing to cooperate with child protection agencies in other countries.”

A petition urging Norwegian officials to return Kai to his parents is here.