DOES IT ADDRESS THE ALLEGATIONS? 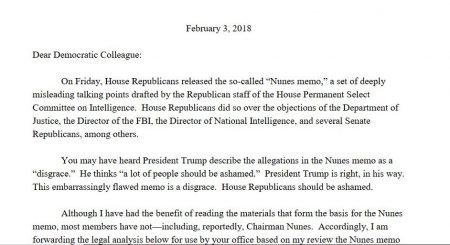 (Feb. 4, 2018) — A six-page document has been posted by NBC News reportedly authored by Rep. Jerrold Nadler, a Democrat on the House Permanent Subcommittee on Intelligence (HPSCI), in response to the four-page memo released by the committee’s Republican majority on Friday.

On Sunday former U.S. Attorney Andrew McCarthy wrote at National Review that Nadler “leaked” the Democrat response, termed as a “legal analysis,” to the press.

HPSCI Chairman Devin Nunes released the Republicans’ memo just after noontime on Friday after the White House declassified it to the reported dismay of the Justice Department and FBI. The memo claims that the DOJ and FBI provided misleading information to a federal judge in the form of a “dossier,” compiled from unknown sources by former MI6 agent Christopher Steele, who had admitted he had a political animus toward Trump.

The Nadler memo claims that the Nunes memo is based on “a set of deeply misleading talking points” and that “House Republicans should be ashamed.”

The day before the Republicans’ release, House Minority Leader Nancy Pelosi attempted to convince Speaker of the House Paul Ryan to remove Nunes from his chairmanship.  Democrats accused the Republicans of divulging “national security” secrets and “classified information.”

The Democrat rebuttal frequently quotes from case law and provides what its author apparently believes is convincing evidence of Steele’s credentials.  It also claims that the FISC “reached the conclusion” that former Trump adviser Carter Page, whose communications were collected as a result of the granted warrants, “was an agent of the Russian government.”

Page has sued The Huffington Post and Yahoo! News for allegedly publishing defamatory information about him which the Republican memo claims was derived from Steele himself, then used in a “circular” fashion to convince the FISC judge to grant the warrants.

The dossier was funded by the DNC and Hillary Clinton campaign, but the Republican memo claims that its political origins were not disclosed to the FISC and that McCabe testified to a congressional committee in December that without the dossier, the court would not have granted the warrants.

It is unclear if Nadler’s memo is part of the anticipated ten-page response to the Republicans’ memo or if Nadler drafted a rebuttal on his own.

In a Friday evening interview, Nunes told Fox News’s Bret Baier that the committee was expected to evaluate the release of the Democrats’ memo using the same process through which the majority’s memo passed in order to be shared with the public.