Will the FISA Memo Be Released on Friday? 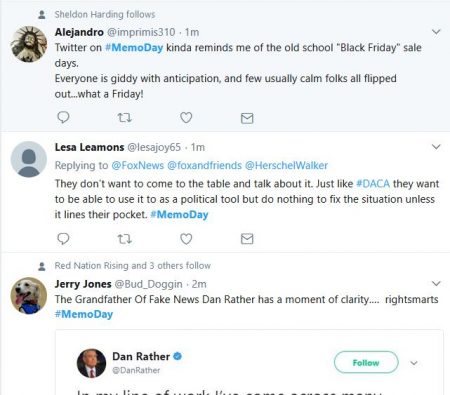 (Feb. 2, 2018) — On his Thursday night broadcast, Sean Hannity stated that his sources had told him that the much-heralded “FISA memo” will be released to the public this morning.

In a fast-moving panorama of events this week, the memo was approved for release by the Republican majority of the House Permanent Subcommittee on Intelligence (HPSCI) and then sent to the White House for the customary five-day review period.

Trump has indicated that in the interest of full “transparency,” he is inclined to allow for the release of the memo.

It was reported Wednesday by Chris Farrell of Judicial Watch and Lou Dobbs of the Fox Business Network that five FBI “professionals” had met that day with President Trump’s chief of staff, Gen. John F. Kelly (Ret), and asked that the memo not be released.

“The FBI is threatening the President of the United States,” Farrell opined about the reported meeting, also stating that Kelly “was the wrong person to meet with.”

On Sunday, FBI Director Christopher Wray reportedly read the four-page memo in a secure room in the presence of two HPSCI congressmen.  On January 31, Fox News’s Catherine Herridge reported that the FBI found no “factual inaccuracies” contained in the memo, which is believed to reflect that abuses of the FISA (Foreign Intelligence Surveillance Act) occurred in 2016 on the part of high-ranking Justice Department and FBI officials in order to obtain a warrant to conduct surveillance on the Trump campaign.

However, later that day, the FBI said it had “grave concerns” about the release of the memo, citing Wray’s “limited opportunity” to review and evaluate its accuracy.  In response, HPSCI Chairman Devin Nunes (R-CA) issued a statement in which he said, “Having stonewalled Congress’ demands for information for nearly a year, it’s no surprise to see the FBI and DOJ issue spurious objections to allowing the American people to see information related to surveillance abuses at these agencies. The FBI is intimately familiar with ‘material omissions’ with respect to their presentations to both Congress and the courts, and they are welcome to make public, to the greatest extent possible, all the information they have on these abuses. Regardless, it’s clear that top officials used unverified information in a court document to fuel a counter-intelligence investigation during an American political campaign. Once the truth gets out, we can begin taking steps to ensure our intelligence agencies and courts are never misused like this again.”

On Thursday, House Minority Leader Nancy Pelosi (D-CA) and Senate Minority Leader Chuck Schumer (NY) called upon Speaker of the House Paul Ryan to remove Nunes from his position.  In a letter, Pelosi wrote that Nunes altered the memo without informing members of the House, that it is “bogus,” and that it Republicans are participating in a “cover-up campaign” to shield Trump from the ongoing Russia investigation.

On “Tucker Carlson Tonight,” Rep. Jim Jordan (R-OH) appeared certain that the memo would be released on Friday.

As of press time at 9:00 a.m. EST, the hashtag #MemoDay is trending in third place in Twitter, just under the two entries for Groundhog Day.

Will the FISA Memo Be Released on Friday? added on Friday, February 2, 2018

One Response to "Will the FISA Memo Be Released on Friday?"