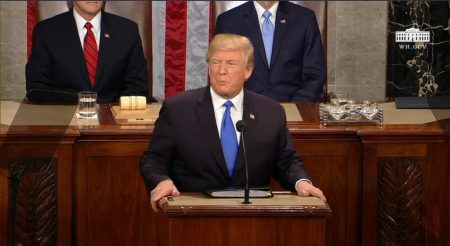 (Feb. 1, 2018) — “Good evening, ladies and gentlemen, and welcome to ‘The Pulse of the Nation,’ your daily info-news break. Hello, my name is Roving and what we do is to stop passersby and ask them their pressing concerns of the day, excluding medical problems affecting themselves and their families and any dire financial problems. I like to think of myself as a charitable guy, but when a bum extends a hand for some money while holding a cigarette in the other: no, thanks. And that’s what I say: I actually say, ‘No, thanks,’ as if they’re the ones doing me a favor by making me feel good about myself for being generous to the poor and needy, the unwanted and unwashed, the Antifa-Anti-Constitution ignorant bums whose life experience equates to relying on money from a Cargo Cult: money from a bank or some other father figure in their cloistered world consisting of classrooms and drug-induced revelations where the consensus at the end of the get-together is ‘Why can’t we all just get along?’

“Now if they’d ever ask me, I’d tell ‘em, now, wouldn’t I? But I really couldn’t tell them where to get off because, really, now, they never even ever got on. I’d say something, though; I’m sure of it. What do you say we get the show on the road after this commercial break?”

“Excuse me, sir. Care to be interviewed on ‘Pulse?’”

“Oh, hi, Roving; for sure. Name is Phil and I play the stocks. When I was a young man I bought candy stocks, but now that I’m older and don’t eat so much sugar I buy anything that has to do with the military and what it’s going to take to make America stronger again.”

“Not me; I don’t qualify since I’m a registered Republican.”

“Good answer. See you. Excuse us while we show another commercial.”

“Excuse me, Miss, Roving for ‘Pulse’; care to stop for a live TV interview?”

“For sure; dog and I watch your show, or I should say, we used to watch but we can’t get you anymore so we have to read the transcript like all the other peons.”

“Okay, I get it. I already apologized; meanwhile, what’s your name and what’s on your mind?”

“Name is Jill, my dog’s name is Miss Mary and why did the Democrats even show up at the State of the Union the other night? They didn’t even show any respect for those two girls who were hacked to death by the MS-13 gang members. They didn’t show any respect for anything; why, one even walked out when the ‘USA, USA’ chant started. Disgusting, and I’m really getting sick and tired of the childish antics by Pelosi and Schumer and all the others, especially the Black Caucus members masquerading as some heathen African jungle cult or Welcome Wagon representatives begging for a donation in order to live off the dole in keeping with their Lifetime Philosophy: Let the suckers work while I live the Life of Riley.”

“Jill and Miss Mary, well, now, so, other than the immaturity of the, what shall I call them?”

“Very well. Now, other than the immaturity of the ingrates, anything else bugging you these days?”

“So you’d think the unemployment rate decreasing would be a good indicator OF which way the economy is heading, but you’d never know it from the look on some, if not all, of the faces of the Democrats. Look, I don’t want to appear rude or anything, but there’s a total disconnect with some of our citizens; well, a lot of our citizens. What’s this ‘I’m owed’ or, even worse, ‘It’s my prerogative’? Nobody is owed anything, and if anybody in America was owed anything, it would be the American Indian, but a few of those are just as messed-up as the rest of us so…you want to hear my bottom line?”

“Wouldn’t miss it for all the tea in China.”

“You know, don’t you, that some day you’ll be arrested for making a racist remark like that. Now here’s my bottom line: you worry about yourself and let me worry about myself, and if I see you bothering anyone I’ll come down upon you like a ton of bricks. And here’s my train. Bye.”

“Bye, Jill; give our regards to Miss Mary.”

“And off she goes, which means we get to throw in a commercial.”

“Wait, I forgot to say something.”

“I forgot to say that this four-page memo is the smoking gun of an attempt to overthrow the government, and nothing less. Now I have to run.”

“Off she goes, again. Excuse me, sir, care to be on ‘Pulse of the Nation,’ the most watched program in its time slot?”

“And when is that, exactly? So you’re Mr. Roving; you look thinner in person.”

“It’s not called the fat camera for nothing. Excuse me, sir, care to be on ‘Pulse?’”

“I thought you’d never ask. What do you think of my poster?”

“That’s nice, but does anyone understand your message? Let’s see here and let me read it: ‘”Refugee” is just another word for invasion,’ and then down on the lower right you’ve written: “Turkey is a part of NATO.” What’s that’s supposed to mean?”

“It means we better be paying attention, is what. I wonder if any of your viewers are so naïve as to believe that Muslims are immigrating into other countries – including ours — to assimilate, because if they are, they’re just going to have a rude awakening, aren’t they? But then they’re the ones that still think that Islam is a religion and not a destructive, especially to women, specifically to women, political philosophy similar to how Vlad the Impaler ran his country: by blood and fear. The name of the game is to protect Obama at all costs because he still is, after all, waiting in the wings. Sending him to a cage down in GITMO would be the best for all concerned. I must be off. Bye.”

“See you around. And that’s all the time we have for tonight and so, on behalf of the crew, I’ll be wishing you all a good night: Goodnight.

“Good show. Let’s say we grab a couple of burgers: my treat.”