IS A BILL BEING CONSIDERED BY CONGRESS THE SOLUTION? 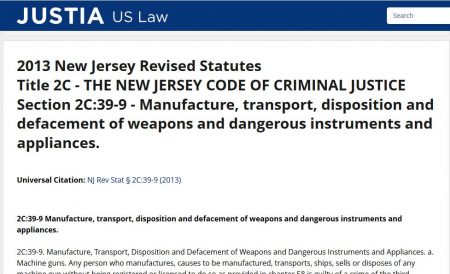 (Jan. 30, 2018) — Just days before the New Year, a 59-year old Florida woman was stopped by authorities in Frenchtown, NJ because of her vehicle’s tinted windows. As she was locating her driver’s license, officers spotted a concealed carry permit.

Upon searching her person, they discovered a handgun in her purse. Donna Marie Gracey, the woman in question, was promptly arrested despite possessing a concealed carry license.

Gracey’s gun was loaded with hollow-point bullets which are heavily regulated in the state of New Jersey where transport and use is concerned. According to NJ law, hollow point ammo is only approved for hunting, fishing and target shooting.

Jersey gun laws are some of the most restrictive on the East Coast, requiring residents to obtain a lifetime purchaser ID card in order to buy rifles, shotguns or handgun ammunition. While open carry is technically permitted, gun owners walking around with long guns are routinely detained and questioned in most areas.

It isn’t the first time in recent memory that a woman has been arrested in the state. In October of 2013, Shaneen Allen, a Pennsylvania mother of two, was jailed for 48 days after cops pulled her over on the highway and found her in possession of a handgun.

Allen was potentially facing years behind bars before then-Gov. Christie issued a pardon. Christie has pardoned out-of-staters under similar circumstances in the past, as long as they held concealed carry permits in their respective states.

Cases like these have popped up across the country, such as that of Marissa Alexander, a resident of Jacksonville, Florida who spent nearly six years in prison or under house arrest after being convicted of aggravated assault, charges that stemmed from her firing a warning shot at her husband who had allegedly beaten her just nine days after she gave birth to their child.

Both Donna Marie Gracey and Shaneen Allen’s experiences are indicative of a distinct partisan hypocrisy. While the liberal establishment constantly calls for women’s rights and stresses the importance of protecting the fairer sex against the abuse of lecherous men, they then turn around and resist any attempts by GOP lawmakers to pass legislation that would make it easier for women to arm themselves. 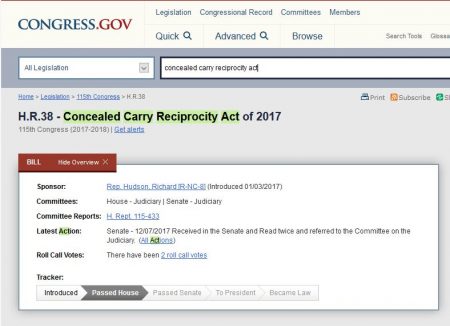 When Rep. Richard Hudson introduced the Concealed Carry Reciprocity Act in the House in January of 2017, a bill which would enable law-abiding citizens with concealed carry permits to carry their guns in all US territories, the vast majority of Democrats were against passing it.

Opponents argued that such legislation would violate federalism, and at least one of the Dems warned that it would prevent states from keeping guns away from schools.

Pennsylvania Democrat Brendan Boyle tweeted in early December, writing, “There are 12 states that don’t require permits for carrying guns. Under #HR38, someone from one of those states could travel to your community and walk right into a school zone with a loaded weapon, no matter what local laws say.”

Of course, this amounted to little more than narrow-minded speculation, and Boyle’s comments about state law ignored the bigger picture. The federal Gun-Free School Zones Act prohibits concealed carry within 1,000 feet of an educational institution. The only persons exempt are those who possess a concealed carry permit in the state in which the school zone is located.

So, while the reciprocity legislation passed in the House does override the federal law, making individuals with a permit in one state capable of legally carrying a gun into a school zone in some other states, most states forbid non-school employees from carrying on school grounds.

As the bill clearly states, “This section shall not be construed to supersede or limit the laws of any state that permit private persons or entities to prohibit or restrict the possession of concealed firearms on their property, or prohibit or restrict the possession of firearms on any state or local government property, installation, building, base, or park.”

Gun control advocates appear to miss the point entirely when it comes to firearm ownership. In the wake of mass shootings, they go after all guns and all gun owners, rather than recognizing the dramatic difference between a woman (or man) carrying a handgun for self-defense and a madman brandishing a semi-automatic assault rifle.

The NSSF has reported that almost three-quarters of retailers have reported a year-over-year increase in female customers as did the majority of retailers in the two previous surveys.

Statistics show that 22% of women report owning a gun. Of those women, the overwhelming number of them differ from their male counterparts in that they purchased a gun for protection rather than recreation.

One survey of US gun ownership found that of those surveyed, 43% of those who owned handguns only were women. Another fact which goes largely ignored by the Left is the unobtrusive nature of handguns for women. Many compact handguns are chambered for smaller-caliber ammunition.

As Marie Claire has noted in the past, women are on edge these days because we live in a culture of fear. The news presents us with a steady stream of sexual assaults, scandals, terrorist attacks and urban gun violence. Many women purchase a gun with no actual intention of using it.

For these individuals, a gun is more symbolic than anything else. It’s an object that makes them feel safe because of what it represents to a prospective assailant. This is a legitimate argument in favor of concealed carry since carjackings and rape reports have been on the rise, and it’s becoming more difficult for defenseless women to feel secure when they’re alone.

If the Senate passes the Concealed Carry Rreciprocity Act, we may see an end to cases like those of Donna Marie Gracey and women like her who obtain a permit to protect themselves.