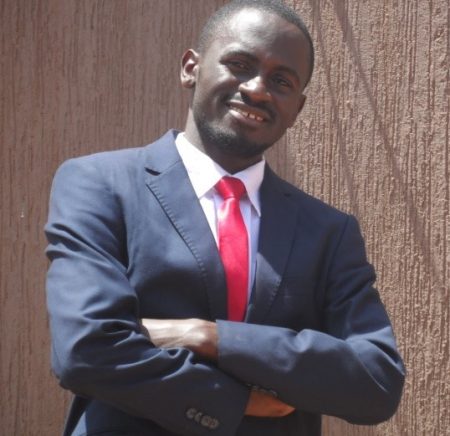 Lyazi’s columns were published at The Post & Email with Driessen as their conduit.  Although we never interacted with him directly, on one occasion we sent Driessen a note of thanks for Lyazi’s most recent article, remarking that he had a bright future ahead of him.

But tragically, that was not to be, at least not on this earth.

After reading Driessen’s reference to Lyazi’s passing on Saturday night, we reached out to him for any specifics he might have on the tragedy.  Driessen responded to our email:

He was on a bus traveling through Kenya back to Kampala, on one of their more hellish roads. Apparently, a truck loaded with logs sideswiped the bus on a bad curve, and dumped its load into the bus, basically destroying it, killing a lot of people, and injuring many others. There are a few pictures online, and it was just horrendous. All of us were devastated. He really did have a lot of promise, and had even attracted a sponsor who was going to bring him to the States to look into a couple of colleges.

We verified with Driessen that an article we located online referred to the accident in which Lyazi had been killed while traveling on “the notorious Sachangwan blackspot on the Nakuru-Eldoret highway, about 200km west of Nairobi.”

Lyazi’s writings were published at Driessen’s website, CFACT.org; at Townhall.com; Canada Free Press, and a number of other websites.  His Facebook page, which had not seen recent activity, extols “my lovely country Uganda.”

The videos posted on his YouTube channel and on his Google+ page feature young Ugandans displaying special talents and reveal a glimpse of Steven’s outlook on the world.

His LinkedIn page indicates that he was president of an organization titled “Environmentalist for a better tomorrow Africa (EFABTA)” and that he held the same position at “ICT CLUB TROPICAL KABALAGALA,” which may have been a high school group.  He was endorsed for “public speaking” and “fundraising” by Driessen and others.

The last article bearing Lyazi’s byline of which we are aware is titled, “What Natural Disasters Should Teach Us” and is responsive to the suffering of “the people in the Caribbean and United States who have been impacted by Hurricanes Harvey, Irma and Maria.”

Lyazi had hoped to see Uganda develop into a country where malaria, from which he had suffered at least twice, could be reduced to the levels of first-world nations through the use of DDT and where families could routinely enjoy “refrigeration, clean water and safe food.”

One of the videos featured on his Google+ page is titled, “Unsung Hero” and features a young man who carries out extraordinary acts of kindness to those he meets throughout the day.  Lyazi captioned the video, “Be good to all.”

The Post & Email Extends its Condolences to the Family and Colleagues of Steven Lyazi added on Sunday, January 21, 2018