CLIMATE SCARE MUST BE DEBUNKED IF COAL IS TO RECOVER 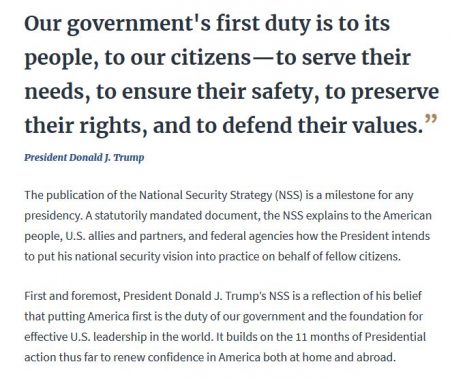 (Dec. 22, 2017) — It is very appropriate that President Donald Trump virtually ignored climate change in his National Security Strategy (NSS). Recent climate change has been unremarkable and clearly does not constitute a national security threat in comparison with concerns such as terrorism and inadequate border controls.

What does constitute a threat, however, is a lack of affordable, reliable energy to power the nation and export into world markets. So, as a citizen of Canada, a nation dependent on a prosperous U.S. for our defence and much of our economy, I am very pleased to see that Trump emphasized energy security and, indeed energy dominance, in the NSS.

To achieve these ends, and in particular to “Promote American prosperity” and “Advance American influence,” two of the four vital national interests identified in the NSS, the Trump administration asserts “Our Nation must take advantage of our wealth in domestic resources.” And one of the most important of its domestic resources, one America is no longer taking full advantage of, are its vast coal reserves, the largest of any nation on Earth.

Testifying on Nov. 28 at the Environmental Protection Agency’s (EPA) public hearing on the withdrawal of the Clean Power Plan in Charleston, W.Va., Robert E. Murray, president and CEO of Murray Energy Corp., summarized the bleak state of affairs: “Prior to the election of President Obama, 52% of America’s electricity was generated from coal, and this rate was much higher in the Midwest. That percentage of coal generation declined under the Obama Administration to 30%. Under the Obama Administration, and its so-called Clean Power Plan, over 400 coal-fired generating plants totaling over 100,000 megawatts of capacity were closed with no proven environmental benefit whatsoever.”

Former President Obama’s dedication to the climate scare contributed significantly to coal’s decline. Besides the impact of the Clean Power Plan, a rule that will hopefully soon be withdrawn, coal has been hammered as a result of a 2015 EPA rule that limits carbon dioxide (CO2) emissions on new coal-fired power stations. The result is that the U.S. can no longer build modern, clean and efficient coal plants to replace older stations as is happening in Europe, China and India. Here’s why:

The 2015 EPA rule, entitled “Standards of Performance for Greenhouse Gas Emissions From New, Modified, and Reconstructed Stationary Sources: Electric Generating Units,” limits CO2 emissions on new coal-fired stations to 1,400 pounds per megawatt-hour of electricity generated. When releasing the new standard, the EPA asserted that it “is the performance achievable by a [supercritical pulverized coal] unit capturing about 20 percent of its carbon pollution.”

This is irrational. CO2 is no more pollution than is water vapour, the major greenhouse gas in the atmosphere. By calling the gas “carbon,” the Obama EPA encouraged the public to think of it as something ‘dirty’, like graphite or soot, which really are carbon. Calling CO2 by its proper name, carbon dioxide, would have helped people remember that it is an invisible, odourless gas essential to plant photosynthesis, clearly not a perspective Obama encouraged.

Also, the technology of CO2 capture on a full-scale power plant is still a technological fantasy. So, in reality, the EPA was actually banning even the most modern, very efficient, supercritical coal-fired stations because their CO2 emissions are at least 20% above the EPA limit.

Considering that the U.S. has 22.1% of the world’s proven coal reserves, the greatest of any country and enough to last for 381 years at current consumption rates, it is a tragedy that America can no longer build new, clean, coal-fired power stations to replace its aging fleet of coal plants. Clearly, the Trump administration needs to cancel this damaging rule as soon as possible.

The climate scare has also impeded coal’s development in the U.S. by restricting its exports. In particular, Asia would be a huge market for inexpensive American coal if sufficient U.S. export facilities were available. But, again, thanks largely to the climate scare contributing to the blocking of construction of coal export terminals, the U.S. exports only about as much coal as does Poland.

To “restore America’s advantages in the world and build upon our country’s great strengths,” to quote from the NSS fact sheets, the Trump administration must obviously continue to promote coal. The U.S. is, after all, the Saudi Arabia of coal. And to effectively boost coal, the climate alarm must be thoroughly debunked.

One Response to "Coal Key to National Security Strategy"