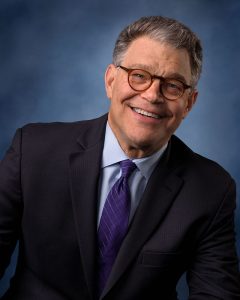 (Dec. 7, 2017) — In an announcement from the floor of the U.S. Senate beginning at 11:46 a.m. EST on Thursday, Sen. Al Franken (DFL-MN) said that he will be leaving that body “in the coming weeks” in apparent response to a number of women’s allegations that he groped or sexually harassed them before he was elected.

During his remarks, Franken said it is “ironic” that he is resigning on account of the allegations, some of which he said are ” not true,” when a man who “bragged on tape” about his sexual exploits with women “sits in the Oval Office.”

Trump has denied the claims made against him, although an audio-visual recording of crude remarks he made to then-“Access Hollywood” host Billy Bush was made public prior to last November’s presidential election.

Without naming him, he also invoked the Alabama special U.S. Senate race which will be decided this coming Tuesday by voters.  Notably, Franken did not use the word “allegedly” when stating that the candidate in question, former Alabama Supreme Court Chief Justice Roy Moore, has “repeatedly preyed on young girls.”

Franken said he has considered women’s issues to be of significant importance and has sought to elevate them during his time in the Senate, which began in January 2009 and continued into a second term with his re-election in 2014.

Pressure mounted on Franken on Wednesday when more than a dozen female U.S. Senators called for him to resign.  Franken had welcomed an Ethics Committee investigation after his first accuser, Leann Tweeden, wrote a column accompanied by a photograph of Franken appearing to grope her while she slept on a USO return flight to the U.S.

Franken said he will continue to be vocal about his political views as an “activist.”  He stressed that his announcement of his resignation “is not about me,” but rather, concerns the people of Minnesota.

On Tuesday, 52-year veteran of the U.S. House, Rep. John Conyers, announced his immediate resignation after it was revealed by Buzzfeed News that he settled a sexual harassment claim lodged by a staffer with a $27,000 payment utilizing taxpayer dollars.

Some have questioned whether or not Franken, Conyers and any other members of Congress who might be faced with the same type of accusation have received “due process.”

Moore has denied all of the claims made against him, several of which do not include inappropriate touching.

Moore did not heed calls from Republican members of Congress to leave the race.  Polls in Alabama showed a sharp drop in his support directly after the first accusations became public, but more recent canvasses appear to show Moore slightly ahead or a statistical tie with Democrat Douglas Jones.

On Wednesday, Moore’s campaign issued a press release threatening to sue a political action committee over an advertisement containing sexual-misconduct allegations based on those expressed by eight women who were interviewed by The Washington Post last month.

On Tuesday, Moore’s campaign asked Alabama Secretary of State John Merrill to investigate reports of election fraud in Bullock County in which “official sample ballots” were allegedly pre-marked for Jones.

A number of right-leaning pundits have said they believe that Democrats have established a new strategy which will include an immediate ethics committee investigation should Moore win next Tuesday’s election and escalating calls for President Donald Trump to resign the presidency.

Franken’s biography states that he has been married for 40 years.