CAN ISIS BE OBLITERATED? 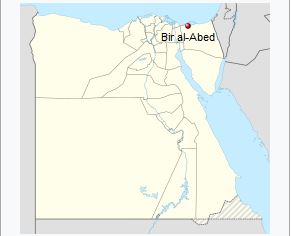 (Nov. 24, 2017) — The U.S. State Department on Friday condemned “in the strongest terms” an attack on an Islamic house of worship in Egypt’s Sinai Peninsula which killed approximately 235 people and injured more than 100.

The assault, caused by a bomb and gunfire, was immediately termed a terror attack by Egyptian officials and condemned by other world leaders.

Egypt’s president, Abdel Fattah Al-Sisi, vowed to respond by “using brute force against those fragments of terrorists” who carried out the attack on the al-Rawdah Mosque.

Al-Sisi followed through on his pledge by commencing air strikes in an area where the perpetrators were believed to have retreated.

The UK Telegraph reported that it is likely that only men were present in the mosque when the attack occurred, possibly representing the majority of the male population of Bir al-Abed, which is located very close to the Mediterranean Sea.

In the early afternoon, President Trump said he would call Al-Sisi to express his condolences.

It is believed that an offshoot of the barbaric terrorist organization ISIS, or ISIL, is responsible based on previous attacks.  The mosque’s worshipers practice a form of Islam, Sufi, which ISIS considers to be “a form of sorcery.”

An ISIS affiliate carried out attacks in the same area earlier this year targeting Christians.  In May, 26 Coptic Christians were killed after the bus in which they were traveling was attacked by men dressed in police uniforms possibly connected to ISIS.

That brutality followed two Palm Sunday attacks on Coptic Christians which killed 44 and injured in excess of 100, prompting a three-month state of emergency in Egypt.

On Thursday, ISIS killed 15 of its own members in Nangarhar Province, Afghanistan.

Following Friday’s attack, Egypt will be observing a three-day period of mourning.

Just prior to taking office, Trump vowed to “destroy ISIS.” Last month Trump celebrated reports that ISIS is weaker in Syria, which has been torn by civil war since 2011.

Egypt has been struggling to contain ISIS since at least 2014.

During a visit to Riyadh, Saudi Arabia last May to discuss ways to combat Islamic terrorism, Trump and al-Sisi appeared to be developing a cordial and respectful relationship.