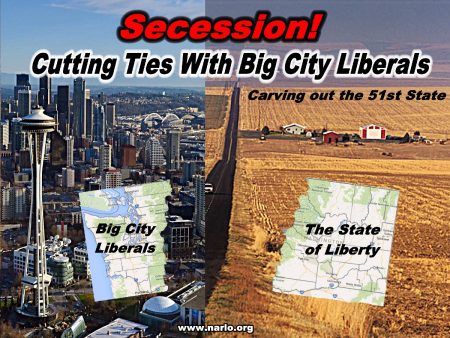 (Nov. 19, 2017) — History has shown us that people don’t behave well when crammed together in big cities.  Big cities have given us the “Blue” states.  Big cities are hotbeds of socialism and government control.  Big cities, with their voting majorities, control the legislative process and give us big-city legislators that support socialism, more laws, higher taxes and environmental extremism, while leaving rural landowners disenfranchised and unrepresented in the political process.  Big cities cram down the throats of rural landowners whatever big cities want, including very costly social and radical environmental policies.

The people who inhabit big cities are more apt to believe whatever the government tells them, whether factual or not.  Their big-city schools pump out social and environmental propaganda into the next crop of big-city occupants.  The current propaganda and mass hysteria of man-caused global warming is a prime example.  Yes, big cities are large markets of consumers and bring us commerce that helps to fund the country and pay for big-city problems.  But it comes at a steep price, and the price is the loss of liberty for rural landowners.

There is now a determined national and international social justice and environmental protection agenda (Agenda 21) by world leaders and American policy-makers to cram more people into large cities and restrict activities in rural areas.  Over-educated, government-paid planners spend all of their time in drafting acts, laws, rules, restrictions, regulations, ordinances and building and zoning codes to direct the movement of populations ever tighter into big cities, pushing mass transit over roads and cars.  The rural areas are to be protected at all costs for the benefit of the environment, without regard to constitutional protections or the rights of rural landowners.  The American Dream of owning your own home on a large lot or small acreage at a reasonable price has died in the religious cult of radical environmentalism.

But the behavior of individuals living tightly in big cities produces its own share of problems.  High crime rates and noise, air and water pollution are just a few of the consequences.  Big cities require large police forces to enforce laws and civility.  Big cities dump their concentrated pollution on the environment and then expect everyone else to comply with environmental protection, except the inhabitants of big cities.  Big cities are very expensive and a massive drain on the national economy.

The study of rats versus density proved what happens to the rats as density of the rat population is increased.  The study showed that the greater the density, the worse the behavior, and the bad behavior manifested itself in the form of population instability, passivity of dominant males, increase in aggressive females, increase in homosexuality, murder of other rats, infanticide and suicide.  (Source:  https://en.wikipedia.org/wiki/John_B._Calhoun)

There are also studies showing that homosexuality is growing in the U.S., especially in millennials, a direct effect of big-city density and big-city social policies.  No, people are not rats, but just look at the problems of big cities and there are some alarming parallels.

But the other consequence of high-density living is the steady lowering of the bar of civility, respect, trust and security.  Just watch the local news every night in any big city where they report daily and nightly shootings, murders, stabbings and other crimes.  These criminal events do not happen in rural areas with such alarming frequency.

Human behavior changes under the conditions of living closer together.  It does so because of a basic human fact.  No matter what the government, socialists, psychologists, or the environmentalists will tell you, people like and need “their” space and the space does not come in a 1,000 sq. ft. apartment in a 25-story building, surrounded by concrete walls on all sides, in a big city.  Suburbs became a partial answer to the human need for space.  But then the suburbs began to increase in density as governments got into the act of “planning” where people live and work.  Now, big-city single-family lot sizes have shrunk to the point that there are no yards for the kids to play in any more.

The Sierra Club, a radical environmental group, came out with a study stating that the optimum density for big cities should be around 50,000 people per square mile.  The only way to achieve that density is through high-rise apartment buildings.  Very few cities around the world come anywhere near that kind of density.  At 50,000 people per square mile, each man, woman and child could only occupy a space of approximately 600 sq. ft. without roads, parks, or open space.    Environmentalists will do or say anything to get people out of the rural areas while severely limiting rural activities.

While big cities writhe, twist and turn in the cesspool of people being crammed close together, their social problems and socialist and radical environmental policies spill over into the rural areas (the Red Counties).  Unfortunately, the last remaining bastion of freedom in America resides in the people who live in rural areas, and they are in imminent danger of being overrun by big-city socialism, radical environmentalism and the social problems stemming from high-density urban populations.

All up and down the West Coast of America are the “Blue” wall states of Washington, Oregon and California.  The rural areas of each state lie East of the major cities of Seattle, Portland, San Francisco and Los Angeles, but the heavy populations of those four cities, several smaller big cities and state capitals, totally control what goes on in each state.  Those areas lying East of the Cascade and Sierra Mountain ranges live under the dictatorial thumb of socialist big cities, and there isn’t one darn thing the rural areas can do about it, except one.  Secede!

One such movement is now taking place in Washington State, as depicted in the image that accompanies this article.  Another is under way in the eastern portions of California and Oregon under the “State of Jefferson.”  If any one of those three states is successful in splitting their state into an East rural state and a West urban state, it might set a trend for many Red States to act in kind and “cut ties with their big city liberals.“

Clause 1: New States may be admitted by the Congress into this Union; but no new State shall be formed or erected within the Jurisdiction of any other State; nor any State be formed by the Junction of two or more States, or Parts of States, without the Consent of the Legislatures of the States concerned as well as of the Congress.

Getting approval for secession from a state legislature, much less the U.S. Congress, is fraught with the same difficulties as getting an amendment ratified to the Constitution.  Nevertheless, the momentum to create a new state is growing, at least in Washington State.  Their goal is to create the 51st State, to be named the State of Liberty.  (Their website is still under construction.)  Their new state name has a certain appeal to those who still think in terms of individual freedom and unalienable rights.   The California-Oregon (Jefferson State) effort is a little farther along than the Washington State effort (Liberty State), being already in court with a lawsuit.

The Washington State legislature, like so many Blue state legislatures, is heavily loaded with Democrats.  The Republicans might gain a few-seat majority in one of the houses for one or two election cycles, but it never lasts long because of the heavy Democrat voting base in the large cities around Puget Sound.  In a special election this month to fill the seat of a State Republican Senator who died, a Democrat State Senator was elected and the Republicans lost their slim majority in the State Senate.  Now both state houses and the Governor’s office are owned by Democrats and will be for the foreseeable future.  This is also true for Oregon and California.

Environmentalists are heavy contributors and lobbyists to the Democrat Party.  Democrat legislators, no matter in which state, are champions of the environment and they continue to pass environmental regulation after regulation that mostly affect rural landowners in sparsely-populated counties such as Eastern Washington, Eastern Oregon, Eastern California, Southern Illinois, or Western Colorado.  But sparsely populated counties have very little (if any) representation in the political process and have no clout to stop the onslaught of environmental regulations.   Much of those regulations are based on flawed science and the nefarious “Precautionary Principle“ but come with a huge cost to rural landowners.  As we wrote in a recent article, “Rural Landowners Are Prisoners On Their Own Land.“

Democrats also support very expensive legislative efforts to slow down alleged man-caused global warming (M-C/GW) even though the science of M-C/GW is unsettled.  Besides heavily taxing industry for this unsettled science, some Democrats would like to charge a tax on livestock flatulent because livestock give off methane gas, which is a greenhouse gas that allegedly causes the climate to get warmer.  So far no such tax has been passed, but give them time and the Democrats in big cities will prevail.  The Democrats’ laundry basket of new environmental laws is overflowing, and with total control of the political process, they will pass most of them, to the detriment of the taxpayer, but especially to the beleaguered rural landowner.

Big-city, liberal environmentalists are crippling agriculture and livestock production in America.  The Washington State Supreme Court just decreed that rural landowners could not drill a well on their own land.  But worse than that, the Democrats and the courts are stealing the constitutional property rights of rural landowners.

Once again, is it any wonder that rural counties want to “cut ties with their big city liberals” (Democrats) by seceding from the big cities of Blue states?  Our organization (NARLO) fully supports and endorses the efforts of the Eastern Washington State counties to secede from their urban liberal cousins of Seattle and create their own state, even though we know they face an uphill battle.

However, if the rural areas of the Red States are not successful in their efforts to secede from big-city liberals, they still have the advocacy and support of the “National Association of Rural Landowners.”  We provide powerful tools for rural landowners to impede, slow down, or stop big-city liberals from stealing their property rights and keeping those liberal government agents off of their land.