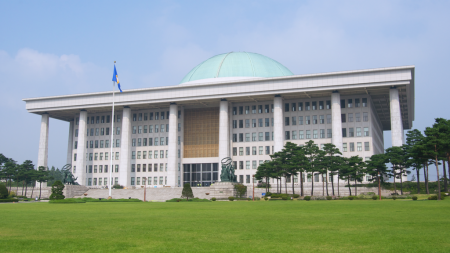 (Nov. 7, 2017) — 9:09 p.m. EST – President Donald Trump is expected to address the Republic of Korea‘s National Assembly, or Parliament, in Seoul at any minute on Wednesday morning on the fourth day of his 12-day trip to Asia.

Thus far, Trump has not stressed in public remarks the looming problem of North Korea’s nuclear program, which saw two missiles launched over northern Japan and a number of bombastic threats against the U.S. mainland, its territories and allies.

Earlier on Wednesday in South Korea, Trump attempted to visit the “DMZ,” which separates the communist North from the democratic Republic of Korea, but was prevented from doing so by dense fog, according to news reports.

At 9:15 p.m., Hannity read from prepared comments Trump is expected to deliver to the assembly, which include a warning to the “rogue nation” of North Korea not to continue to threaten the U.S. with a nuclear attack.

“Obviously, the president will not be mincing words tonight,” Hannity said after reading further from the prepared remarks.

At 9:20 p.m. EST, Trump and wife Melania entered the seated National Assembly chamber to standing applause.  The Speaker thanked Trump for making the “state visit” to his country, which he said had not been done by a U.S. president in a quarter-century.

Just before introducing Trump, the Speaker recognized Melania Trump, asking her to stand and accept their warm welcome.

He recounted the history, beginning in World War II, which drew U.S. and South Korean soldiers together in a common goal of driving out the communists.

“You lost hundreds of thousands of brave soldiers,” Trump said, referring to the Korean conflict, while stating that South Korea has evolved into “one of the great nations of the world.”

He remarked that the South Korean economy has burgeoned since 1960 and that the country’s life expectancy has lengthened greatly.

Trump then lauded the U.S. economy, which has seen a leap in the stock market over the last ten months and the lowest unemployment rate in 17 years.

At 9:31 p.m., Trump said, “I want peace through strength,” hearkening back to the slogan which Reagan had invoked while president.

At 9:48, Trump began to recount North Korea’s launching of missiles and successive nuclear tests, claiming that it viewed the United States’ “past restraint as weakness.”

In response, Trump said that North Korea is making “a big mistake.”