(Nov. 6, 2017) — The American people, especially the patriotic ones, simply do not want to hear or believe any bad news about their country — Eric Samuelson

When I wrote “A Comparative analysis of the demise of the Russian Empire in 1917 and of the United States of America now” (2012), I didn’t expect that the shameful parallels would go on and on until the abysmal situation we have reached now, in this ominous centennial of the 1917 coup in Russia. As I had already mentioned in the opening statement of the Judeo-Christian America, our nation entered into the year 2017 unrepentant, forever losing a chance of timely repentance and delivering justice to all perpetrators of the 2008-2016 usurpation of the US presidency.

The US has forever lost its chance to duly enforce the law against the unruly impostor while he was in office, like South Korea did to their criminal president. It remains to be seen if America ever enforces the law at least after the 2008-2016 usurpation; if America is capable at least to replicate what the former USSR did in 1956 partially exposing and repenting about the Stalinism three years after Stalin dropped dead in 1953.

However now (2017), seeing how shamelessly and readily the entire nation forgot and buried the still running never acknowledged government crime of the usurpation, a comparison between the last decades of the former USSR and America now becomes even more telling. That’s what I am trying to demonstrate in this essay.

Ought to never happen, yet it did

During Stalin the USSR was a hell on earth akin to that in the contemporary North Korea on a much greater scale. There was no limit for atrocities and evil perpetrated by the government on a daily basis to thousands upon thousands of people for no reason: not even for a hint of resistance to the regime. Even under Hitler some resistance could take place, say non-Jewish wives could organize a picket against the deportation of their Jewish husbands into extermination camps and save them. Under Stalin however it was unthinkable that family members ever publicly demand for any indulgence for their dear ones and themselves.

Millions upon millions, the entire class of middle class peasants with their families where brutally deported into far corners of Siberia to their death, and into GULAG for killing forced labor. Entire ethnic groups in hundreds of thousands were similarly exiled in a matter of hours. It was a routine that the Kremlin sent down directives to districts how many thousands must be arrested, executed, or convicted (to 25 years forced labor in GULAG).

Approaching 1953, NKVD tortured and executed a group of Jewish doctors falsely accused in mistreatment of high Soviet apparatchiks, and in preparation was the next not very hidden plan of total exile of the entire Jewish people of the USSR to their demise in the far eastern taiga (after the show-case executions and pogroms). Only due to a sudden death of Stalin this plan had not been implemented.

As of this moment we still do not know whether Stalin dropped dead because of natural causes, or he was killed in a coup of his henchmen in Kremlin (something never attempted before). That time however his surrounding had all the reasons to get especially concerned. They knew that Stalin used to rid of his closest henchmen one by one on a regular basis, “renewing” his staff all the time (to exclude any chance of a coup, among other things). However than in 1953, given a scale of the new Stalin exile “project” for which they all were to be blamed later, they perhaps saw no escape for themselves but to finally dare to act. Whichever the case, Stalin got dead.

Stalin got dead, and soon quite silently the government began releasing millions of inmates of GULAG. Here the word “silently” is crucial.

By the very essence of the Soviet regime during and after Stalin, this massive release of inmates (or any other correction of whichever past atrocity of the regime) could be only silent, without any acknowledgment. No wrongs of the past were supposed to be ever mentioned about anything concerning the “great cause of Marx/Lenin/Stalin”: particularly not concerning the atrocities during Stalin! And how could be otherwise when perhaps a half of the nation were accomplices of the atrocities serving as informers, and the entire nation practiced a grotesquely farcical cult of the greatest ever “leader” of all the peoples!

Moreover, any exposure of Stalinism would deliver a severe blow to each and every foreign puppet of Stalinism seated in China, North Korea, and Vietcong which also practiced farcical cult of Stalin and their local “leaders”. And it did: immediately after an exposure of the Stalinism, the tight friendship between the USSR and China broke.

Furthermore, an exposure of Stalinism would bring enormous troubles also for the Western clients of Sovetskih – to all those “Communist parties” of the West, which then ought to explain to their members and the Western citizenry why they so blindly supported the soviet monster during all the past decades.

Even the rulers of the Western world would be embarrassed because they too ought to explain why they so eagerly licked the Stalin’s boot in the past decades; why they had built the heavy industry for him, and participated in the war on his side and on his terms (see “American Betrayal” by Diana West). 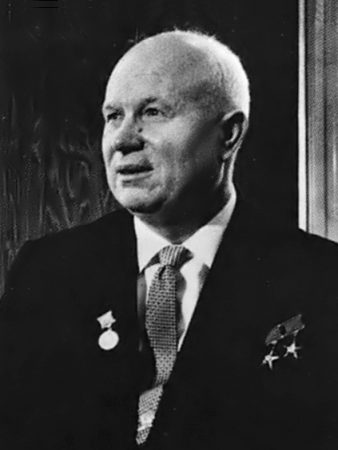 It’s still not clear who in the Politburo were capable to initiate acknowledgment of the terrible past. They all were heavily involved in it. That very Nikita Krushchev (later credited for the exposure and condemnation of Stalinism in 1956-1960), was an ugly Stalin’s jester known for his zeal to ask Stalin even for an increase in the directives for arrests in Ukraine.

It still remains a mystery how a few personalities at the very top had managed to conceive and conspire to achieve some exposure of Stalinism. The very logic of the Soviet policy required staying silent and keeping a taboo on Stalinism forever. Why not? The Politburo and other henchmen get out of it quite safe after the “Master” dropped dead (except the head of NKVD Beria, which was promptly executed). Nobody would ever dare to open the can of Stalin’s horrors anyway. And it would be just ridiculous to suspect any traces of repentance or pangs of conscience in them.

An exposure of the Stalinism ought to never happen, yet somehow it did, though in a controlled limited way.

They condemned the Stalinism during their party congresses in 1956 and 1960, yet no tribunal had been ever set, and near all former members of the Politburo during Stalin remained in place: even the notorious “gray cardinal Suslov”, commissioned with the mega-project of Jewish exile.

The CPSU Congress (mind you!) acknowledged, denounced, and distanced themselves from Stalinism and its horrors. Sure enough, they did not denounce Communism (and how could they). They claimed that the Stalinism was a distortion of Communism – and look at their “integrity and “honesty”: they had acknowledged and corrected that “distortion” on their own!

“We must do away forever with a cult of personality! We must acquit all the victims of the Stalinist repressions, consolidate even tighter around the Communist party, and go on towards Communism.

Up to work, Comrades. Our generation will live in Communism” (said Nikita Krushchev, meaning the great “prosperity” and “blessing” for the Soviet citizenry, mind you).

The No-Shame-America vs. the Post-Stalin USSR added on Monday, November 6, 2017

One Response to "The No-Shame-America vs. the Post-Stalin USSR"