(Oct. 29, 2017) — According to The Wall Street Journal on Thursday, IRS Commissioner John Koskinen’s term ends on November 12, with David Kautter of the Treasury Department nominated to serve as interim commissioner thereafter.

Some in the media characterized Koskinen’s departure as a “firing,” although no such announcement was made by the Trump administration.

However, some Republicans in Congress, led by then-House Oversight and Government Reform Committee Chairman Jason Chaffetz, as well as the public-interest legal organization Judicial Watch, had stridently called for Koskinen’s impeachment earlier this year.

In a letter dated April 6, 2017, 38 members of the House of Representatives averred that Koskinen was untruthful in testimony to Congress  about the existence and preservation of emails concerning the IRS targeting scandal to which then-IRS Director for Exempt Organizations Lois Lerner admitted in May 2013.

The letter stated of Koskinen, in part: 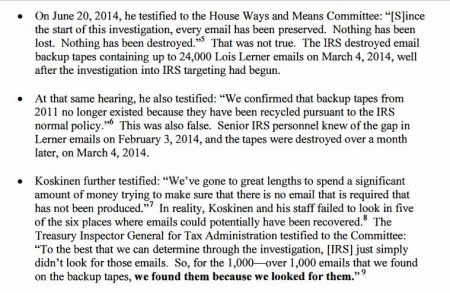 A JW petition to have Koskinen impeached states that “Koskinen has aided and abetted the Obama administration in covering up a scandal of monstrous proportion and severity –the chilling Obama administration scheme that involved former IRS employee Lois Lerner to deploy the awesome power of the IRS in order to cripple conservative groups and target conservative individuals and help President Obama win re-election in 2012.”

On Friday, Jay Sekolow of the American Center for Law and Justice (ACLJ) announced a $3.5 million settlement between the IRS and ACLJ plaintiffs who were discriminated against in regard to their applications for tax-exempt status beginning in 2010.  The announcement begins:

We have just obtained a resounding victory in our legal challenge to the IRS’s political targeting of conservative organizations.

In an unprecedented victorious conclusion to our years-long legal battle against the IRS, the bureaucratic agency has just admitted in federal court that it wrongfully targeted Tea Party and conservative groups during the Obama Administration and issued an apology to our clients for doing so. In addition, the IRS is consenting to a court order that would prohibit it from ever engaging in this form of unconstitutional discrimination in the future.

In a proposed Consent Order filed with the Court yesterday, the IRS has apologized for its treatment of our clients (36 Tea Party and other conservative organizations from 20 states that applied for 501(c)(3) and (c)(4) tax-exempt status with the IRS between 2009 and 2012) during the tax-exempt determinations process. Crucially, following years of denial by the IRS and blame-shifting by IRS officials, the agency now expressly admits that its treatment of our clients was wrong.

In August 2013, Obama nominated Koskinen to replace then-Acting Commissioner David Werfel, who assumed responsibility for the agency after Commissioner Steven Miller resigned following the revelations of the targeting scheme.

At the time of Koskinen’s nomination, then-Treasury Secretary Jack Lew said, “With a distinguished record of turning around large companies and reorganizing the management and operations of highly complex public and private institutions, John is the right person to take on this critical position at this important time. Because John has a clear understanding of how to make organizations more effective and an unshakeable commitment to public service, he will be an exceptional leader who will strengthen the institution and restore confidence in the IRS. John is a man of the highest integrity, and I want to thank him for agreeing to return to public life and serve his country again after a long and accomplished career. I urge the Senate to confirm this nomination quickly.”

In September, the Trump Justice Department announced that it would not criminally charge Lerner for her role in the targeting operation.