The Mainstream Media Will Not Tell You This About Rep. Frederica Wilson 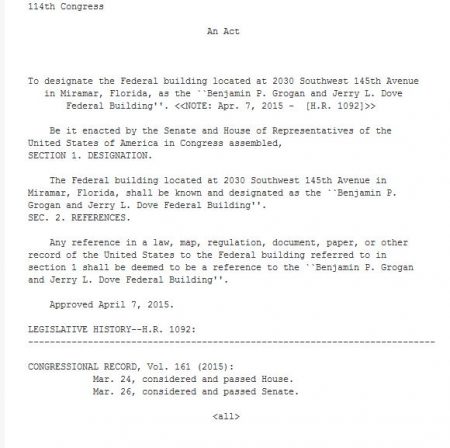 (Oct. 21, 2017) — On Friday and Saturday, many media outlets were quick to point out that White House Chief of Staff Gen. John F. Kelly (Ret) was incorrect when he took the podium at Thursday’s daily press briefing and stated that Rep. Frederica Wilson (D-FL24) took personal credit for securing funding for a new FBI building in April 2015.

Early Saturday afternoon, “John Kelly” was trending in second position on Twitter, where many demanded that Kelly apologize to Wilson for his error.

Wilson has been serving in Congress since January 2011.  A former school principal, she appears to have a shiny cowboy hat to match each of her color-coordinated outfits.

The FBI building, located in Miramar, FL, opened and was formally dedicated on April 11, 2015 to two FBI agents, Benjamin P. Grogan and Jerry L. Dove, slain on April 11, 1986 in a street shooting in Miami-Dade County, which Wilson now represents.

FBI documents about the deadly incident can be read here.

In his remarks on Thursday addressing what he saw as a violation of the sacredness of a soldier’s death on Wilson’s part, who characterized a condolence phone call President Trump made to a young widow as “insensitive” and disrespectful, Kelly faulted Wilson for having allegedly boasted that she helped secure the federal funding to construct the new FBI field office.

On Wednesday, Wilson claimed to be with Johnson’s widow on the way to the airport to receive the late soldier’s body when Trump called the widow to express his condolences, reportedly against Kelly’s advice.  Wilson quoted Trump as having said to Myeshia Johnson, “Well, I guess he knew what he signed up for. But I guess it still hurt.”

Trump has denied the claim, and White House Press Secretary Sarah Huckabee Sanders stated that others in the room when Trump made the call, including Kelly, found Trump’s tone to be appropriate and respectful.  Kelly is himself a “Gold Star” father who lost a son in Afghanistan in 2010.

Huckabee Sanders said that Kelly’s view is that “if you’re able to make a sacred act like honoring American heroes all about yourself, you’re an empty barrel,” a term which Wilson has called “racist” in a Friday CNN interview.

CNN’s Chris Cillizza, no fan of Trump’s, disagreed with that finding.

Video of the FBI dedication event released by the Miami Sun-Sentinel on Friday shows that Kelly was mistaken about Wilson’s actual words.  He also misstated “Dove” as “Duke” while at the podium.

Wilson first recognized several members of Congress present that day; the families of the fallen; then-FBI Director James Comey, who was to speak, and later, current law enforcers, who she asked to stand.  “Stand up!” she said in a rather shrill voice, perhaps drawn from her days as a school principal.

Before lauding the fallen and the injured agents involved in apprehending the two suspects that day, Wilson related that “the FBI” had approached her to ask that she streamline legislation for naming the building through Congress.  Wilson said that her subsequent action, despite the tight time frame of “four weeks,” was that “Everyone said, ‘That’s impossible.  It takes at least eight months to a year to complete the process  — in the House, the Senate, and to the president’s office.’  I said, ‘I’m a school principal,’ and I said, ‘Excuse my French; oh, hell, no; we’re gonna get this done!” to the sound of laughter and applause.

Wilson claimed that the legislation was passed out of committee in “two days,” then was sent to the House floor for a full vote.  She said that she and Rep. Carlos Curbelo “presented it.”  “We all voted, and I dashed it over to the Senate and put our senators on notice,” Wilson added.

“They hotlined it to the Senate floor in just two days,” Wilson correctly claimed.  “And guess what:  the president signed the bill into law this past Tuesday, April 7, 2015, with a bang, bang, bang!” she exclaimed.

She said that she would “be presenting a copy of the bill that was signed into law to the FBI and also the pen that the president used to sign that hallowed document.”

Congress.gov shows that the legislation was introduced to the House by Wilson on February 25, 2015 and that it was passed by that chamber a month later on March 24, 2015.

This year, Wilson has introduced a number of bills relating to student loan debt, payroll fraud prevention, and “Education and the Workforce.” She has voted against a number of measures intended to benefit military members.

On October 12, 2017, Wilson introduced into the Congressional Record a statement on the loss of Sgt. Johnson, which includes the following remarks:

Our soldiers were not there to fight but to provide training and
assistance to the Nigerian Army forces and the multinational joint task
force created to combat Boko Haram.

Yes, my heart breaks for this monumental loss, but it is also
bursting with pride for all that he achieved and would have
accomplished. During the few years in which he bravely served our
Nation, he received several awards and accolades, including the Army
Achievement Medal, the Army Service Ribbon, and, ironically, the Global
War on Terrorism Medal.

I sprung into action after Boko Haram kidnapped 276 schoolgirls in
their boarding school in Nigeria. I traveled to Nigeria four times in
my quest, and I have initiated the “Bring Back Our Girls Wear Red
Wednesdays” in the Congress of the United States. I appreciate the
support, especially from our leader, Nancy Pelosi.
I traveled there in August and met over 100 girls who were once
hostages of Boko Haram. I wanted them to know that this Congress loves
them and we will never, ever forget them.

The entire statement can be read here.

The Mainstream Media Will Not Tell You This About Rep. Frederica Wilson added on Saturday, October 21, 2017

2 Responses to "The Mainstream Media Will Not Tell You This About Rep. Frederica Wilson"