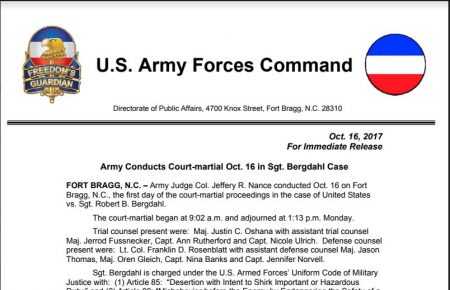 Sgt. Bergdahl is charged under the U.S. Armed Forces’ Uniform Code of Military Justice with:  (1) Article 85:  “Desertion with Intent to Shirk Important or Hazardous Duty;” and (2) Article 99: “Misbehavior before the Enemy by Endangering the Safety of a Command, Unit or Place.”

Sentencing proceedings are scheduled to begin on Oct. 23, 2017.