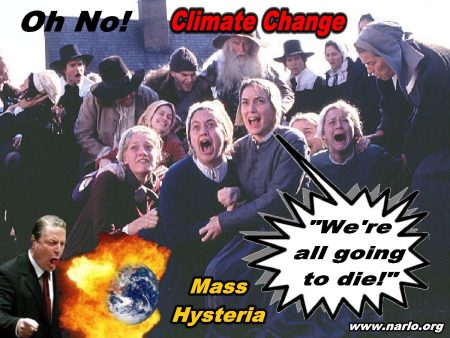 (Oct. 15, 2017) — “Never have so many been so duped by so few and paid such a huge price for failing to use logic and their innate intellect and common sense, to poke holes in a radical, monumental, environmental climate swindle and con game.”     Ron Ewart

Climate change, alias man-caused global warming, is everywhere.  It’s under rocks, behind trees, in the classroom, in textbooks, on TV and radio and in every newspaper.  It’s on the lips of U.S. presidents and other world leaders.  It’s in Europe and the United Nations.  It is in Central and South America.  It’s in Africa, Australia, New Zealand and even Canada.  The Russians, Chinese and even the people of India believe in it.  It’s up in the sky and down in the ground and lurks deep in the oceans.  Monster-CO2-footprint Al Gore is obsessed by it.

The dirty little secret is that climate computer models have gained the power to create planet-wide mass hysteria resulting from endless planet-wide propaganda based on agenda-driven, flawed science.  Why?  Because these notoriously inaccurate computer models tell us that “climate change” is man’s greatest threat to his survival and we are all going to die if we don’t PAY UP, especially Americans!  Drivel! Poppycock!  Balderdash!

What is even worse is that the Environmental Protection Agency, with the power to make rules and policy, believes in it so deeply that it issued a “Declaration Of Climate Endangerment.”  On December 7, 2009, the then-administrator signed two distinct findings regarding greenhouse gases under section 202(a) of the Clean Air Act:

NOTE: Fortunately, the Trump Administration and Scott Pruitt, EPA Administrator, have called for a more thorough review and analysis of the EPA’s 2009 Endangerment Finding and are challenging its assertions.

Any scientist worth the paper upon which his advanced degree is printed, knows that trying to model a non-linear dynamic system with computers (like weather) is fraught with such a wide menu of variables where even a miniscule change in any one variable can have a massive influence on the final prediction.

Case in point.  Scientists Edward N. Lorenz Lorenz (1917 to 2008) built a mathematical model of the way air moves around in the atmosphere. As Lorenz studied weather patterns he began to realize that the weather patterns did not always behave as predicted.  (Hmmm!  Imagine that!)  Minute variations in the initial values of variables in his twelve-variable computer weather model would result in grossly divergent weather predictions.  His fairly accurate and massive data set had numbers out to six (6) places to the right of the decimal, as in “21.352467.”  He ran the computer models with the data set he had, using all six decimal places, but then decided to drop the last three decimal places and ran his computer model again.  The outcome with the last three (3) decimal places missing was vastly changed from the outcome using six (6) decimal places.  What he discovered was that sensitive dependence on initial conditions (the “Butterfly Effect”) meant that weather predictions more than a week out (or even less) are generally inaccurate.  (Anyone watching the daily weather reports knows that.)

Not wanting to rely on just one scientist for our climate model error analysis, we found another source on climate model errors at the accredited Hoover Institute in an article entitled: “Flawed Climate Models” at this link:  https://www.hoover.org/research/flawed-climate-models  The article opens with:

“The atmosphere is about 0.8˚ Celsius warmer than it was in 1850. Given that the atmospheric concentration of carbon dioxide has risen 40 percent since 1750 and that CO2 is a greenhouse gas, a reasonable hypothesis is that the increase in CO2 has caused, and is causing, global warming.”

“But a hypothesis is just that. We have virtually no ability to run controlled experiments, such as raising and lowering CO2 levels in the atmosphere and measuring the resulting change in temperatures. What else can we do? We can build elaborate computer models that use physics to calculate how energy flows into, through, and out of our planet’s land, water, and atmosphere. Indeed, such models have been created and are frequently used today to make dire predictions about the fate of our Earth.”

“The problem is that these models have serious limitations that drastically limit their value in making predictions and in guiding policy. Specifically, three major problems exist. Each one alone is enough to make one doubt the predictions. All three errors together deal a devastating blow to the forecasts of the current models.“

Note: “W/m-2” = “Watts per square meter” and is a parameter used in climate modeling.

“As Willie Soon and his co-authors found, ‘Our current lack of understanding of the Earth’s climate system does not allow us to determine reliably the magnitude of climate change that will be caused by anthropogenic (human) CO2 emissions, let alone whether this change will be for better or for worse.'”

Have you seen this article anywhere in the mainstream media?  No!

Mass Hysteria:  “In sociology and psychology, mass hysteria (also known as collective obsessive behavior) is a phenomenon that transmits collective illusions of threats, whether real or imaginary, through a population in society as a result of rumors and fear.”

In April of 1954, in Seattle, Washington, before the liberal socio-virus had infected the entire city and now most of the state, Washington State experienced a phenomenon known as the pitted windshield mystery.  It seems, upon close inspection, everyone’s car windshield had tiny pits in them, or so everyone thought.  It started up north in the state and rapidly spread to the big city of Seattle within a week.  The print and radio news media (not much television then) picked it up, and suddenly, out of nowhere, there was a full-blown mass hysteria on what was causing the pits.  From cosmic radiation, to sand fleas, to extra-terrestrial microscopic invasions, to the Navy’s new million-watt transmitter, to micro-organisms that ate glass, to a shift in the Earth’s magnetic field, there were no end to answers to this bizarre mystery.  The event was a textbook case of mass hysteria, or collective delusion, aided and abetted by a willing news media.   What people were seeing was the normal wear and tear on a car’s windshield.  They imagined the rest.

The fact is, all it takes is a few extraneous pieces of information or a wild hair of an idea to connect unrelated dots, for whatever reason.  Then throw in a large measure of irrational emotion and a conspiracy theory is born, especially if it is allegedly supported by so-called “irrefutable” science.  With the Internet, a conspiracy theory, fully documented with doctored science, hits cyberspace and the race is on to expand the conspiracy beyond any semblance of common sense.  Of course, in all conspiracy theories, there must be a villain to be vilified or feared and a victim to be pitied.  The range of villains and victims is only limited by the imagination and designs of the perpetrators, aided and abetted by the unbridled hysteria of the population at large.  Like an avalanche, the conspiracy must run its course until it expends its energy, or finally becomes unbelievable, as the truth outs.

But some mass hysteria is purposely induced in the population with malice aforethought by an individual or a group of individuals with a hidden agenda and something to gain, whether it be control, territory, money, power, or all of the above.

We are not prone to accepting any conspiracy theories at face value without a full vetting.  Most of them are suspect at best and outright lies at worst.  But some have a kernel of truth that surrounds them.  Such is this mass hysteria by an entire world population over the fraud that is man-caused global warming, a radical environmentalist’s construct.  It has been propagandized by world government bodies and supposedly credible authorities and has been parroted by the print and electronic news media and federal, state and local governments here in America and abroad.  It is further reinforced by international accords, like Kyoto and the Paris Climate Change Agreement.  The basic tools for promoting climate change by the environmentalists and government are unproven science, rumors and FEAR.

Our own federal government has taken over the curriculum of the entire public school system and now indoctrinates (brainwashes) our public school and college-age children with fear and intimidation over a non-crisis that has been wholly manufactured by international government bodies and co-conspirators in science, either with a political axe to grind (world domination and/or a massive transfer of wealth), or an eye on the next grant money coming out of the public treasury for further climate research.

Even as the science mounts against man-caused global warming, this valid, credible science is totally ignored by environmentalists, the government and the full range of the worldwide news media.  Articles supporting the fraud appear frequently in newspapers and on radio and TV reports, but hardly a peep is heard about the science debunking it.

This never-ending propaganda stream of made-as-instructed climate science has been spoon-fed to a gullible, naive, non-thinking population who couldn’t tell a non-truth if it bit them on the behind.  The perpetrators and purveyors of this fraud have done so on a planet-wide scale of unprecedented proportions, fully exploiting the self-induced prevailing insanity of our times, into a feeding frenzy of global mass hysteria for the sole purpose of population subjugation and wealth redistribution, using computer climate models as the weapon.

If you are a rural landowner, don’t forget to check out our powerful, legally intimidating No Trespassing signs HERE.