Gramps: Tell Us a War Story 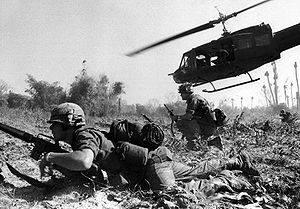 Gramps: “But first, here’s a question for you: why do you think some Americans want to keep the Swamp?”

Gramps: “Well, I’ll tell you. You see, some people are easily manipulated to do what they may think is right, but isn’t. Actually, they’re so far off-course and set in their ways that they can’t understand that it’s even remotely possible that they’re, first, being controlled and, second, wrong.”

Gramps: “I can give you examples until the cows come home, but I’ll cite a couple. The anti-Vietnam War movement was one, where rather than have a strategy to win the war, all we had was a strategy to, well, I don’t know other than to test the feasibility for helicopters to replace horses; the M-16 to replace the M-1; and the Merchants of War to make a bundle on government military contracts.

“It all came down to a choice to either win the war or get out, and since our pansy politicians are so afraid of China – as President Truman was during the Korean War — we turned tail and ran away with our tail between our legs. Another example is this anti-Trump movement to thwart any attempt to drain the Swamp.”

Grandchild #1: “Are there any connections between the two?”

Gramps: “Matter of fact, there are: simple-minded people are gullible, which means they’re easily swayed by the flavor of the day.”

Grandchild #2: “Flavor of the day? What do you mean by that?”

Gramps: “Whatever is popular at the moment. Like we’ve all heard of the ‘casting couch,’ but as soon as it became mainstream everyone jumped on a high horse and proclaimed that they’re vehemently opposed to ‘casting couches.’”

Grandchild #1: “But why do people hate President Trump?”

Gramps: “You mean like Larry Flynt? Now there’s a sad case: small people come up with small ideas. I understand he’s offering 10 million dollars to anyone who can find a reason to impeach Trump.”

Gramps: “Look, take Flynt and all the other Trump detractors with a grain of salt, although they’re not even worth that little.”

Grandchild #1: “Whenever they report that a Muslim murdered someone or went on a rampage they almost always claim it was because of mental illness; why can’t they just say it was a Muslim, like what happened in Las Vegas?”

Gramps: “Well – and this is the funny part – unbeknownst to them, they are mentally ill: you’ve got to be nuts in order to be a Muslim.”

Gramps: “Right, maybe they’re not Muslims but they’re all nuts. All no-accounts; worthless human beings. Now to my war story, but first I’ll get in the mood by listening to a song.”

Grandchild #2: “Will it be for real or are you going to tell a made-up one?”

Grandchild #1: “Are you going to shoot a gun while you carry a wounded man, like in your last story? I liked that one but not the gory parts, like when the plane landed. Don’t they like airplanes?”

Grandchild #2: “I wouldn’t have shot up the airplane. I would have kept it like new and flown it around.”

“First off, every port has a dive, or bar, named after the city San Francisco, which is where I was, sitting at the bar, drinking a bottle of San Miguel, which is the Budweiser of the orient. Matter of fact, I took a tour of the San Miguel brewery in the Philippines and the end result, the beer that was being bottled, had a green tint; I kid you not.”

Grandchild #1: “Back to the story; you get distracted and go off on a tangent.”

Gramps: “Back to the story. So my buddy and I were sitting at the bar.”

Gramps: “Maybe around five in the afternoon.”

Grandchild #1: “Go on, or are you going to tell us all about the Chinese clocks that had different length of the hours depending if was day or night and at what time of year it was?”

Gramps: “No, I’m not. We were sitting at the bar when all of a sudden mortar rounds started popping in all around us. We couldn’t hear them incoming because of the loud music. Ever hear a Filipino or a Vietnamese sing ‘I Left My Heart in San Francisco’ in a dive called the ‘San Francisco Club’? Something you’ll never forget.

“So these mortar rounds are exploding all around us, and when they hit the roof they explode or go through and hit a truss and then explode so shrapnel is whistling by like there’s no tomorrow, which, as it turns out, is the sad fact for some in the bar. So one hit right at the front door, another on the roof over the dance floor, in front of the band; well, not like the bands we have here in the States. Vietnamese bands somehow disdain anything that doesn’t sound like a screech owl; they lean towards the sound of fingernails scratching on a blackboard.”

Gramps: “So we just ordered another round and are waiting for the bartender to bring us the beers when the rounds start coming in, but he’s cowering behind the bar, next to the ice machine, trying to be invisible to the shrapnel and things falling from above. But what about our beers? So I bend over the bar and get his attention that there’s two Americans who are in dire need of a couple of ice-cold beers, understand? Like now?

“So the bartender gets up and brings us our beers; meanwhile, understand, rounds are landing all over the place, people screaming and moaning. Fires break out and there’s smoke and lots of dust in the air. So we get our beers and start drinking as if nothing is happening around us, okay? So the bartender keeps standing in front of us, on the other side of the bar, and he doesn’t move while the whole neighborhood is going up in loud explosions. 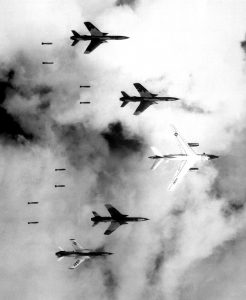 “If you ever get into a firefight it’s amazing how time slows down, and that’s how it was, sitting in the San Francisco Club. The whole attack didn’t last but maybe three minutes but it felt like, easily, 30. We sat there drinking until the MP’s came and threw us out. And that’s my war story.”

Grandchild #1: “But how come you didn’t run and hide?”

Gramps: “Because there was no place to run and hide, that’s why. Besides, we had the feeling we were on borrowed time anyway; you see, we just came back from a stint in the boondocks and were just plain lucky to make it back without a scratch. Matter of fact, I didn’t get one scratch my whole time in except for a few times, one of which left one heck of a scar on my left forearm.”

Gramps: “It’s like when your time is up, it’s up. There were a couple of Marines who ran out the door when those mortar rounds landed and a couple of them didn’t make it. They would’ve if they had just stayed and enjoyed the show. It’s just life; no rhyme or reason.”

Gramps: “Well, the thing about that story is there’s a definite moral: don’t jump to conclusions, because when the driver and the spotter were waving and pointing, it wasn’t because it was an expert water skier, as I first thought. It was that there was a shark following me. Look, I’m tired and late for my nap. See you kids later.”