As The Post & Email has reported over approximately the last year, Harmer is an assiduous gatherer of documentation and details concerning Tennessee Department of Correction (TDOC) published policies and procedures and violations thereof by prison management and correction officers.

The ACA summarizes its activity and purpose as:

Some of the information Harmer has imparted to this publication has been corroborated by WSMV in Nashville in a four-part series aired in June and ongoing reports concerning two of Tennessee’s privately-run prisons, TTCC and SCCF. Harmer has spent time in both of of those institutions, and, as with numerous other inmates over the last 17 months, has reported woefully inadequate medical care, a lack of inmate employment opportunities, inmate drug abuse, and a high degree of gang violence, particularly at TTCC.

Harmer’s latest letter to Clemmons, copied to The Post & Email and other parties, details his current situation in protective custody at MCCX brought about after a gang member was allowed out of his cell unattended.  The “Crips” inmate entered the cell of Harmer and his then-cellmate, threatening theft of property, to which Harmer responded reflexively and physically.

It is well-known within the prison community that physical contact with a gang member by an “unaffiliated” inmate means the latter must immediately seek protective custody for his own safety.  Harmer believes that the incident was allowed to happen out of retaliation for his exposure of MCCX’s treatment of him since his arrival there on June 2.

Since that time, Clemmons has been a frequent recipient of Harmer’s numerous memos, grievances and letters directed to news media, MCCX Warden Shawn Phillips, TDOC Commissioner Tony Parker, and other state legislators.  Harmer has previously called for Parker to “fire” Phillips.

Inmates other than Harmer have reported physical abuse and placement in solitary confinement while at MCCX.  Dozens from SCCF and TTCC collectively have reported inmate and staff assaults, rampant gang activity, the presence of bedbugs, deficient medical care, and, most recently, a lack of running water at SCCF.

The most recent ACA inspection of TDOC facilities appears to have been conducted two years ago, a copy of the report from which The Post & Email unsuccessfully attempted to obtain directly from the ACA.  Inspectors did not visit CoreCivic-operated facilities or MCCX, among others of the state’s 14 prisons.

The ACA’s recommendations focused on “staff scheduling” and other administrative matters.  During the summer of 2015, a documented staffing crisis occurred after then-TDOC Commissioner Derrick Schofield changed the way in which correction officer overtime was paid, prompting hundreds of correction officers to resign.

The ACA report also suggested changes in terminology and “definitions” concerning inmate disciplinary reports.  There was no mention of the issues of medical care, inmate idleness or gang activity.

Of the October 2015 ACA inspection, the TDOC wrote that “The ACA team determined that our prisons were operationally disciplined, stable, and productive…”

The official ACA standards are not published online.

In his last paragraph, Harmer cited Tennessee Code Annotated (TCA) 41-1-103(a), which requires prison wardens to take an oath stating that they will “willfully, faithfully, impartially, and diligently perform” the responsibilities associated with their position.

TCA 41-1-104, also invoked in the letter and mandating the warden’s responsibilities, reads: 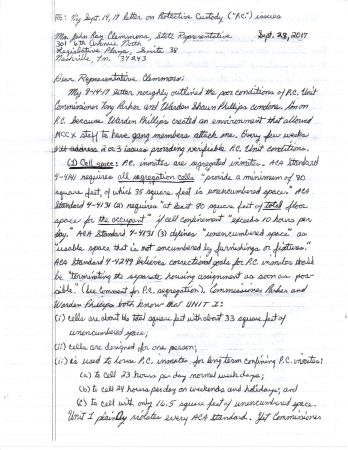 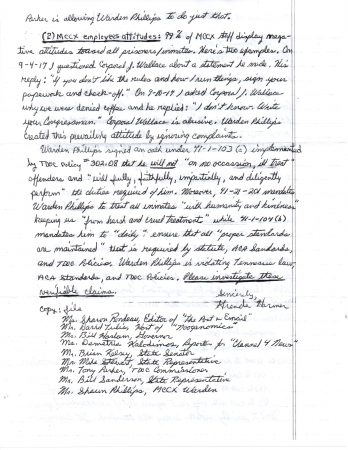