“HARMER, YOU WERE RIGHT” 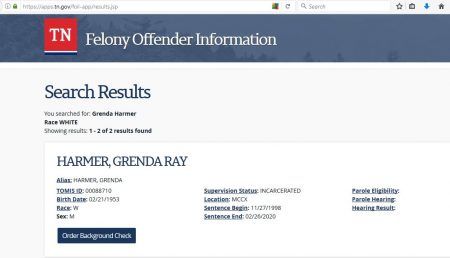 (Oct. 3, 2017) — As The Post & Email has reported, Tennessee Department of Correction (TDOC) inmate Grenda Ray Harmer, #88710, has been housed at the Morgan County Correctional Complex (MCCX) since June 2.

Since his arrival, he has related the confiscation of his personal property by MCCX intake staff; threats made against his person; retaliatory treatment, including unwarranted placement in solitary confinement; a 32-day hunger strike which he said almost killed him; and a physical confrontation with a gang member which he believes was “orchestrated” by correction officers.

After the “Crips” gang member entered his cell on July 28, Harmer reflexively placed his hands on him in an attempt to stop the theft threatened against his cellmate.  As a result, Harmer was taken to the “protective custody” (PC) area of the prison, which, although not a punitive action, returned him to the condition of solitary confinement.

He believes it was done purposely so as to cut him off from other inmates and from gathering information about prison staff, which he has done over at least the last year through his incarceration at three different prisons.

Harmer has also assisted inmates in writing grievances and approaching staff about treatment programs and other benefits which he determined have been earned by inmates but not awarded by prison program personnel in certain situations.

TTCC is owned and operated by private prison operator CoreCivic, while SCCF is owned by the TDOC but managed by CoreCivic.  Harmer and others have reported rampant inmate drug abuse, a lack of medical care, and uncontrolled gang activity and dangerous conditions at both CoreCivic-run institutions.

Many of the claims have been corroborated by WSMV (Channel 4) in Nashville.

The Post & Email has received written reports from two other MCCX inmates and a number of inmates’ relatives describing physical abuse at the hands of correction officers.

As of Harmer’s latest letter, he remains in protective custody.

In a lengthy letter received on Tuesday, Harmer related a different kind of news:  that Warden Shawn Phillips admitted to Harmer that he was correct when he claimed that a fellow inmate, “Durman” should be awarded additional sentence credits, which can shorten the time an inmate must spend in prison.

“Harmer, you were right.  We owed Durman up there some sentence credits.  Good work,” Harmer quoted Phillips as having told him in the presence of Associate Warden of Treatment (AWT) Hutchinson last week.

Although TDOC spokeswoman Neysa Taylor told David Tulis of Nooganomics that Harmer’s recent letters are “fictitious,” The Post & Email does not agree with that assessment based on the voluminous documentation Harmer has sent us over the last 11 months and Channel 4’s corroborating reports.