WILL CONGRESS REPLACE IT? 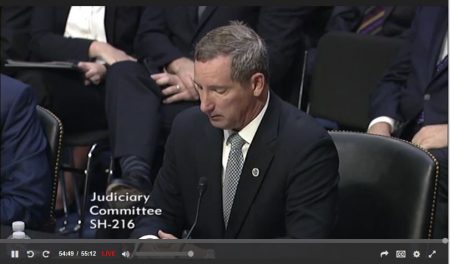 (Oct. 3, 2017) — The U.S. Senate Judiciary Committee began a formal hearing at approximately 10:00 a.m. EDT on Tuesday regarding the Trump administration’s decision to close the DACA program, which allowed qualifying illegal aliens under the age of 31 to obtain Social Security numbers, work permits and remain in the U.S. temporarily for two-year intervals.

On September 5, Attorney General Jeff Sessions announced at a press conference that DACA would be closed to new applicants and phased out over the next two years.  Any current DACA enrollee may reapply by an October 5 deadline; after that, no reauthorizations will be issued.

A live feed is here:  https://cis.org/Testimony/Oversight-Administrations-Decision-End-Deferred-Action-Childhood-Arrivals

As this article was being prepared, Sen. Richard Durbin was speaking about his attempts to pass the “DREAM Act” over the last 16 years and support of two “Dreamers” who were not deported and went on to obtain higher educational degrees.

DACA was enacted through a memo issued by the Department of Homeland Security (DHS) at Barack Hussein Obama’s direction in 2012.  On November 20, 2014, Obama announced that he would expand the program and create a new one, DAPA, but DAPA was found unconstitutional by the courts.

Legal challenges have been filed to the Trump administration’s decision to end DACA.

After Sessions made his announcement last month, Trump urged Congress to pass a legislative solution to the challenge of young illegal aliens brought to the U.S. by family members when they were children.  Thus far, three senators have introduced the SUCCEED Act, which the sponsors say is based on “fairness,” merit” and “compassion.”

Editor’s Note:  The live feed is provided by the Center for Immigration Studies (CIS), which opposes DACA and advocates for stricter enforcement of U.S. borders and immigration law.  The hearing can also be viewed from the website of the Senate Judiciary Committee here:  https://www.judiciary.senate.gov/

Update, 12:00 noon:  Grassley announced that CIS Executive Director Jessica Vaughan will be testifying.  At 12:01, Vaughan was introduced and began to speak.